Students may be banned from dining halls for violating takeout policy 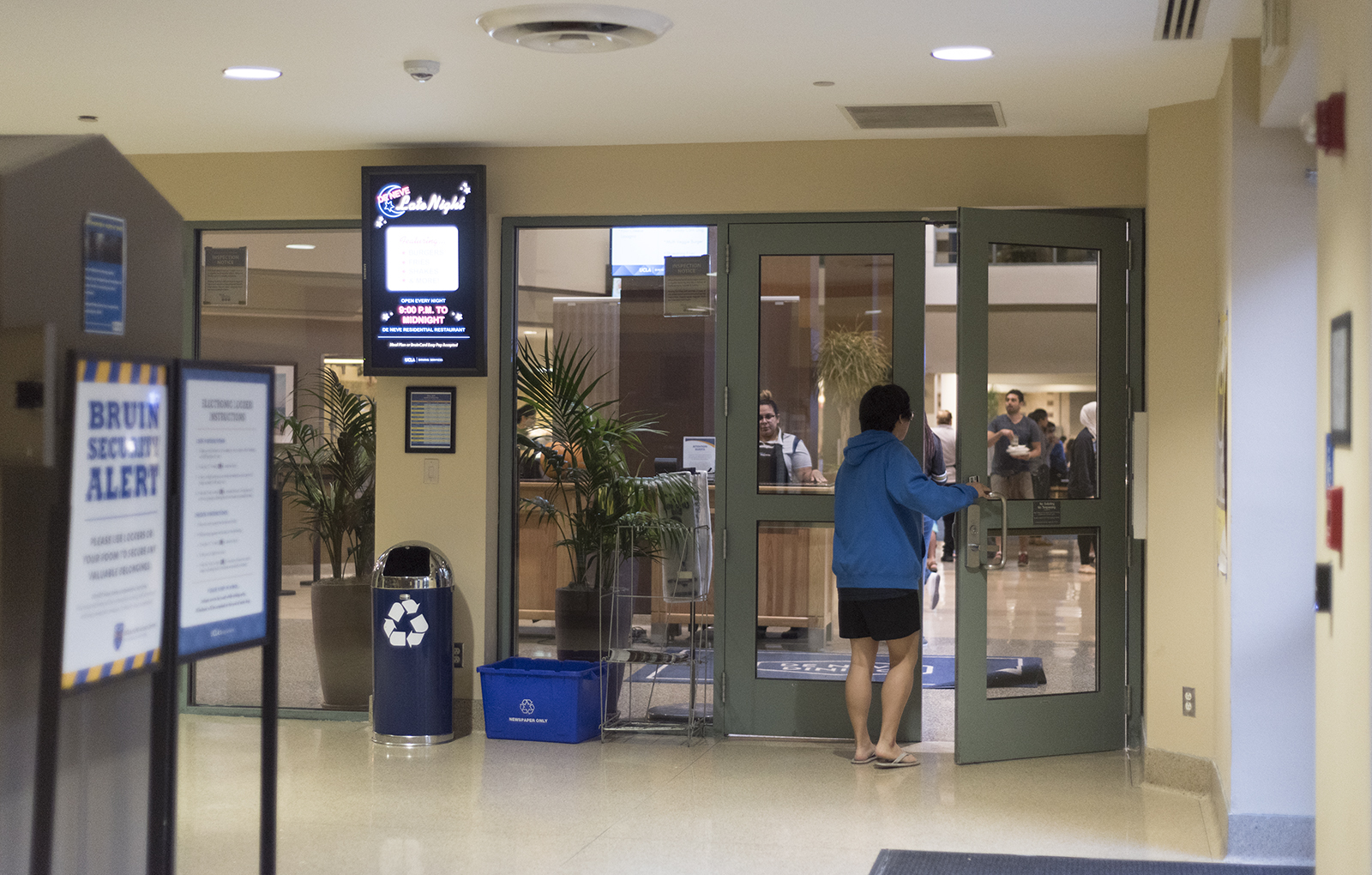 UCLA Dining Services and Residential Life may ban students from certain dining halls if they take extra food from those facilities. The current policy allows guests to take out one fruit, baked good or dessert. (Daily Bruin file photo)

If students living on the Hill are caught taking out more than one piece of fruit or dessert from a dining hall, they could be banned from that dining hall for the rest of the academic year.

Yu said RGC has been encouraging students to abide by the takeout policy in person and on social media.

O’Connor added while UCLA Dining Services and Residential Life would never suspend students’ meal plans, they have the right to prevent students from accessing particular dining halls if they do not follow campus policies.

He said because students fund Dining Services with their annual room and board fees, meal plan prices could potentially increase in future years if students continue taking more food than the annual budget allows for.

“They’re set with a stable budget that they have to abide by because they can’t ask students for more money after the fact,” he said. “That’s how they plan the meals out.”

O’Connor said that while Residential Life is sympathetic to students who violate the policy because they are food insecure or cannot afford or access enough healthy food, he said recent cases of misconduct have not been because of food insecurity.

“We want to make sure they are eating enough … to see if they are trying to feed a friend or family member,” O’Connor said. “If we find out that they are (food insecure), we point them in the direction of … campus resources both on and off campus for food security.”

Resources to address food insecurity include CalFresh, a federal program that provides low-income individuals with need-based money for food, and the Community Programs Office Food Closet.

Several students said they agree there should be penalties for violating dining hall policy, but think banning individuals from specific dining halls for a whole year is unnecessary.

Christopher Thai, a third-year computer science and engineering student, said he thinks it is too harsh to ban students from dining halls.

“To be punished for that is really unfair,” Thai said. “What happens if you get banned from all of the dining halls?”

Tim Ching, a third-year microbiology, immunology and molecular genetics student, said he does not think the policy will discourage students from taking food from the dining halls.

“Even if you’re banned, what if someone else swipes you in?” Ching said. “The hardcore banana thieves will still go at it.”

Rachel Wile, a second-year physiology student, said she does not think the takeout policy can be enforced effectively.

“A lot of times, people just walk out and they’re not caught,” she said. “It might discourage some, … but people will keep doing it anyway.”

O’Connor said Residential Life has considered banning students from certain dining halls in the past, but has only seriously considered putting it into action this quarter.

“The reality is, we don’t want to ban anyone from the individual dining facilities, but we do want the enormous removal of items to stop,” he said. “Every time there are items removed from a dining facility, they’re only hurting themselves and the other residents that live on the Hill.”