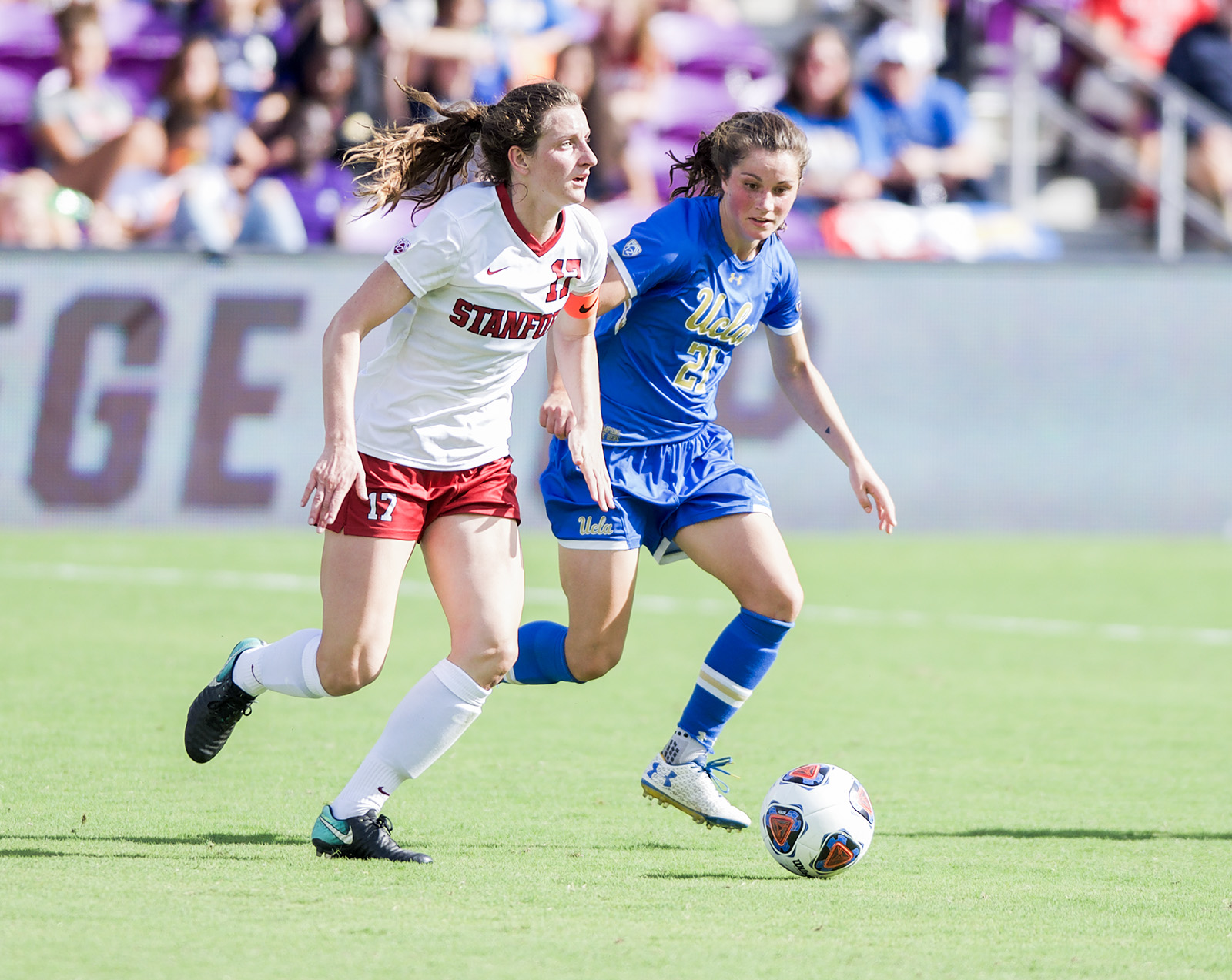 Sophomore midfielder Jessie Fleming took a penalty kick at the beginning of the second half to get the Bruins on the board. UCLA scored another goal to tie things up, but couldn’t overcome a third goal by Stanford. The Cardinal now leads the nation in national championships after claiming its 114th title Sunday. (Axel Lopez/Daily Bruin)

ORLANDO, Fla. – This weekend, the two most successful athletics programs in the country had opportunities to hoist their 114th trophy.

And for the first time in history, Stanford surpassed UCLA to claim the top spot in overall NCAA championships for around six hours Sunday.

The second-seeded Bruins’ women’s soccer team (19-2-3) made a two-goal comeback in the second half of the game, but ultimately fell 3-2 to the top-seeded Cardinal (23-1-0) on Sunday.

“In the end, I don’t think we had enough in the tank to really force the issue the way we normally do with our press,” said coach Amanda Cromwell. “The difference is it was a hot day, big field. I think the effort was there for 90 minutes.”

Stanford’s aggressive offense was ultimately too much for UCLA, as the Bruins struggled to take possession from the Cardinal, who logged a total of 15 shots compared to UCLA’s five.

“Possession is what we do best,” said Stanford midfielder Catarina Macario.

The Cardinal scored the first goal of the game in the 15th minute when sophomore goalkeeper Teagan Micah stepped off her line to chase down a ball, giving Stanford forward Kyra Carusa an open shot at the goal.

“You have to show the other team that you’re ready to play and ready to go after them,” said Stanford coach and UCLA alumnus Paul Ratcliffe. “ You have to start out strong in those big five moments.”

The Cardinal drew blood again in the 26th minute when Macario pushed the ball up the field toward Stanford midfielder Andi Sullivan, who raced ahead and fired another past Micah.

The second half started with the Bruins notching two goals in four minutes to tie up the game.

“During halftime we talked about it and said we were going to go out and fight until the whistle,” said freshman midfielder Delanie Sheehan. “That’s what we did.”

Stanford goalkeeper Alison Jahansouz was given a yellow card in the 54th minute for tackling, allowing sophomore midfielder Jessie Fleming to take a penalty kick and strike it past Jahansouz to get UCLA on the board.

The Bruins scored again in the 58th minute when redshirt sophomore forward Anika Rodriguez took a corner kick and sent the ball into a cluster of white and blue jerseys. Sheehan leapt up and headed the ball straight into the corner of the goal.

“I think these girls have shown all year long they’re super resilient and trust in each other,” Cromwell said. “That’s what you saw in that comeback – doing what they need
to do.”

The Cardinal answered with a third goal in the 67th minute, when midfielder Jaye Boissiere fired a ball just past Micah’s outstretched hands.

“(Boissiere) scored a fantastic goal,” Ratcliffe said. “It’s difficult to come back from a situation like this, but these girls wouldn’t be denied.”

UCLA continued to battle for a goal until the clock wound down, but finished the game one goal shy of Stanford.

This is the Cardinal’s second national championship in women’s soccer, with its first coming in 2011. It is also Ratcliffe’s second title in his 15-year tenure.