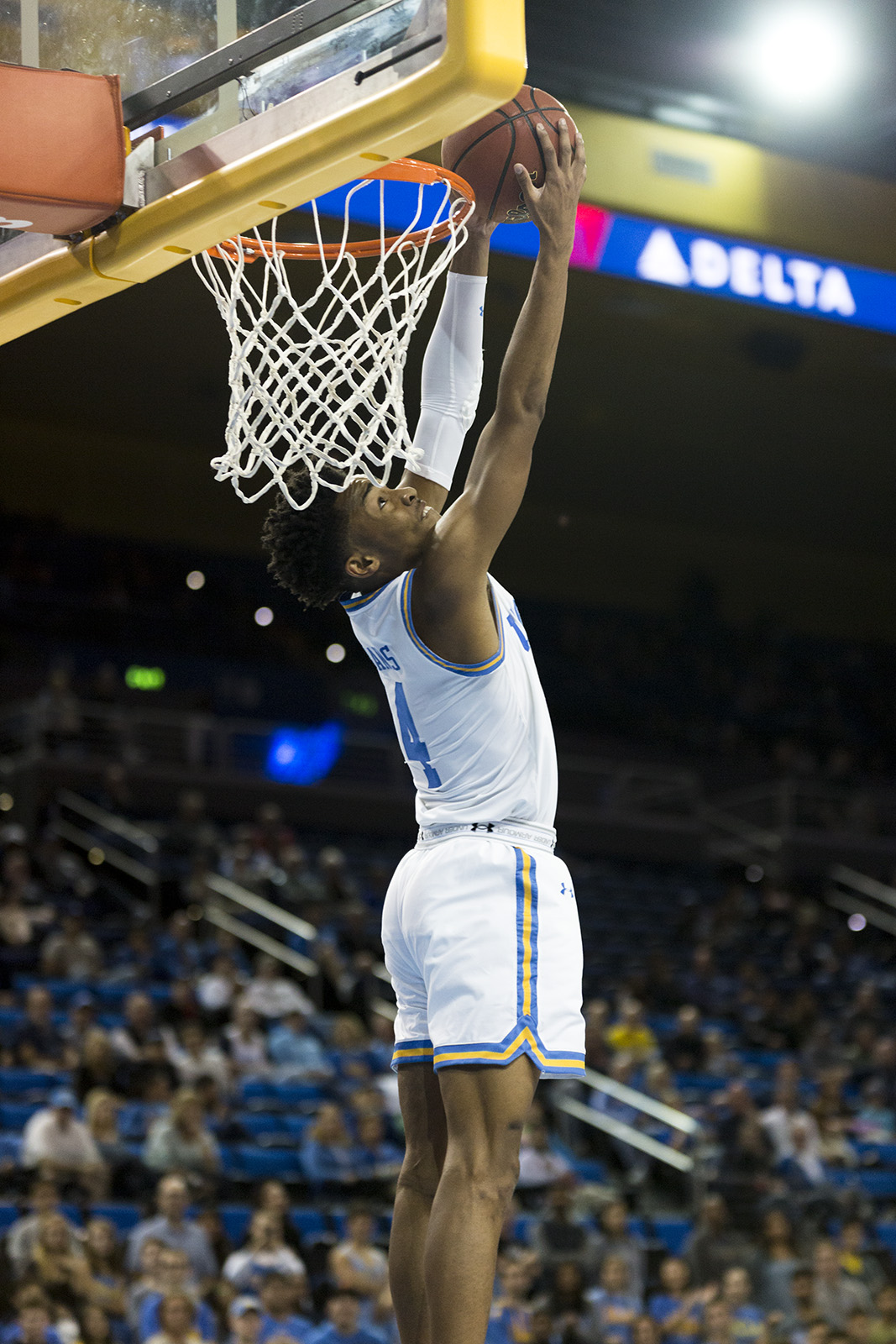 Jaylen Hands had three dunks in UCLA men’s basketball’s shellacking of Detroit Mercy on Sunday. The freshman guard said after the game that the dunks weren’t up to his standards due to the fact that his foot is still giving him trouble. (Michael Zshornack/Photo editor)

Jaylen Hands had seen the play before.

The freshman guard knew where the next pass was going and sprang into the passing lane to tap the ball away.

From there, it was a foot race, with Hands getting to the ball first and taking off for a breakaway tomahawk dunk.

The play was a microcosm of UCLA’s 106-73 win over Detroit Mercy (4-4) Sunday, in which the Bruins (7-1) entertained the Pauley Pavilion crowd throughout by consistently turning defensive stops into easy transition opportunities.

“I knew coming in that if we played defense, it would be a very fun game because of the pace they play,” said redshirt sophomore guard Prince Ali. “We knew if we got stops, we’d be able to run. And we were able to get stops.”

Detroit Mercy entered the game playing at the fifth-fastest pace of any team in the nation, per KenPom.com, and UCLA took advantage by getting out in transition. The Bruins held the Titans to just 43.1 percent shooting, including just 33.3 percent from behind the arc, and scored 19 points off turnovers on the night.

These easy opportunities helped UCLA produce its highest offensive efficiency of the night, according to KenPom.com, with the Bruins shooting 52.8 percent and connecting on 11 3-pointers. They turned the ball over just eight times.

“I thought it was maybe our most complete game,” said coach Steve Alford. “Putting two halves together defensively like we did was very, very good for us and we were really efficient offensively. … We’re starting to value the ball a little bit better and we’re getting better shots.”

Hands came off the bench to ignite the Bruins, racking up 10 points in his first four minutes of action en route to a career-high 23 points on 8-of-13 shooting. Less than a minute after the first breakaway dunk, Hands produced another steal-and-slam.

“That was the most fun we had in a game this year,” Hands said afterward.

The Bruins outscored the Titans by 26 points during Hands’ 24 minutes.

“He definitely gave us a spark each time he came into the game,” Alford said. “He was very, very active. And I think he’s growing defensively, so that’s something that’s going to be crucial to our success moving forward.”

Ali added 20 points of his own on 8-of-12 shooting, and junior guard Aaron Holiday and freshman guard Chris Smith each scored 14 points.

UCLA went into halftime leading 52-35 and quickly put the game away with a 21-4 run early in the second half that included six points from Ali and eight from freshman guard Kris Wilkes.

Two of Wilkes’ points came on a highlight-reel dunk in which he brought the ball down to his knees before slamming it home.

“It’s exciting, just seeing everybody get up, having fun,” Holiday said of the dunk-happy performance. “It just goes back to defense, honestly. We play defense, we’ll get out and run and get all those easy dunks.”

Holiday said the Bruins’ biggest focus on the defensive end was preventing the Titans from getting inside. It worked, as UCLA outscored Detroit Mercy 49-16 in the paint.

“We’ve grown defensively to where we’re able to get more stops,” Holiday said. “Now it’s just becoming a habit, so hopefully we continue that down the road.”