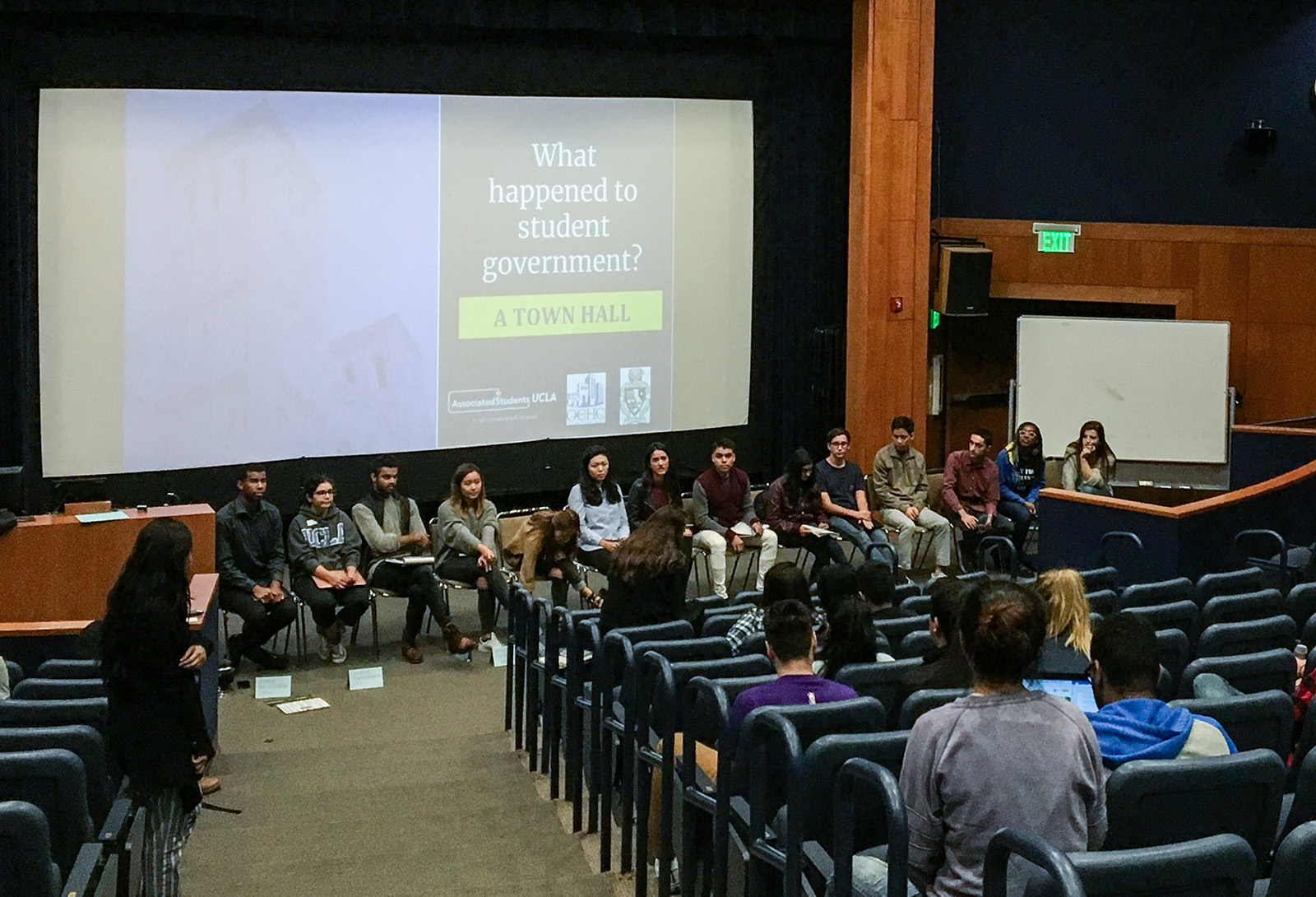 Students called on undergraduate student leaders to better engage with and listen to their concerns at a town hall meeting Friday.

“The lack of people here says a lot about what people think about USAC – they don’t care.” Sharma said. “They don’t know what it is.”

USAC External Vice President Chloe Pan said she thinks it is important that students also participate in local and state politics and encouraged students to engage with the Westwood Forward coalition, a group of students and home and business owners pushing for a new neighborhood council for Westwood.

Several students who attended the town hall said they think USAC is not diverse enough.

Norris’ submission argued council members challenged the office’s appointees because of their affiliation with Bruins United, while the Academic Affairs Commission’s appointees were not challenged despite many being affiliated with mother organizations. Council members make appointments to a variety of campus entities, and some of these appointments, such as to the ASUCLA Board of Directors, receive stipends.

“Do you think that writing an op-ed bashing mother organizations will hurt Bruins United in the upcoming elections?” Njoku said at the town hall, addressing his question to USAC President Arielle Mokhtarzadeh.

Mokhtarzadeh declined to answer Njoku’s question at the town hall but said she thinks individuals are taking parts of the submission out of context. She added she would be willing to answer his question in private after the town hall.

“If we pick bits and pieces out of articles for our own political purposes, we aren’t creating a unified cohesive environment for students’ voices,” she said.

Several students said they think UCLA should introduce more meal plan options on campus and asked why their swipes do not carry as much value at campus restaurants as they do on the Hill. Students can trade one meal swipe for a $2.45 meal voucher they can use at ASUCLA-owned restaurants on campus.

Justin Jackson, USAC general representative 3, said many students have consistently asked to be able to use swipes on campus.

“Having swipes on campus is a huge elephant in the room when USAC and OCHC meet with ASUCLA,” he said. “We are waiting for OCHC to facilitate an initiative that would allow that to happen.”

“As a Jewish student who eats kosher, I did not want to live on the Hill because I ate so much tofu the first year, and I am working to make sure that there are better kosher and halal options in Ackerman Union,” she said.

“As a general representative, my office isn’t tied to any specific thing when deciding what to do, so that means that there’s no limit to what we can or can’t do, so I really encourage everyone to approach me on what you need,” she said.