UCLA engineers collaborate in research for CPS use in military 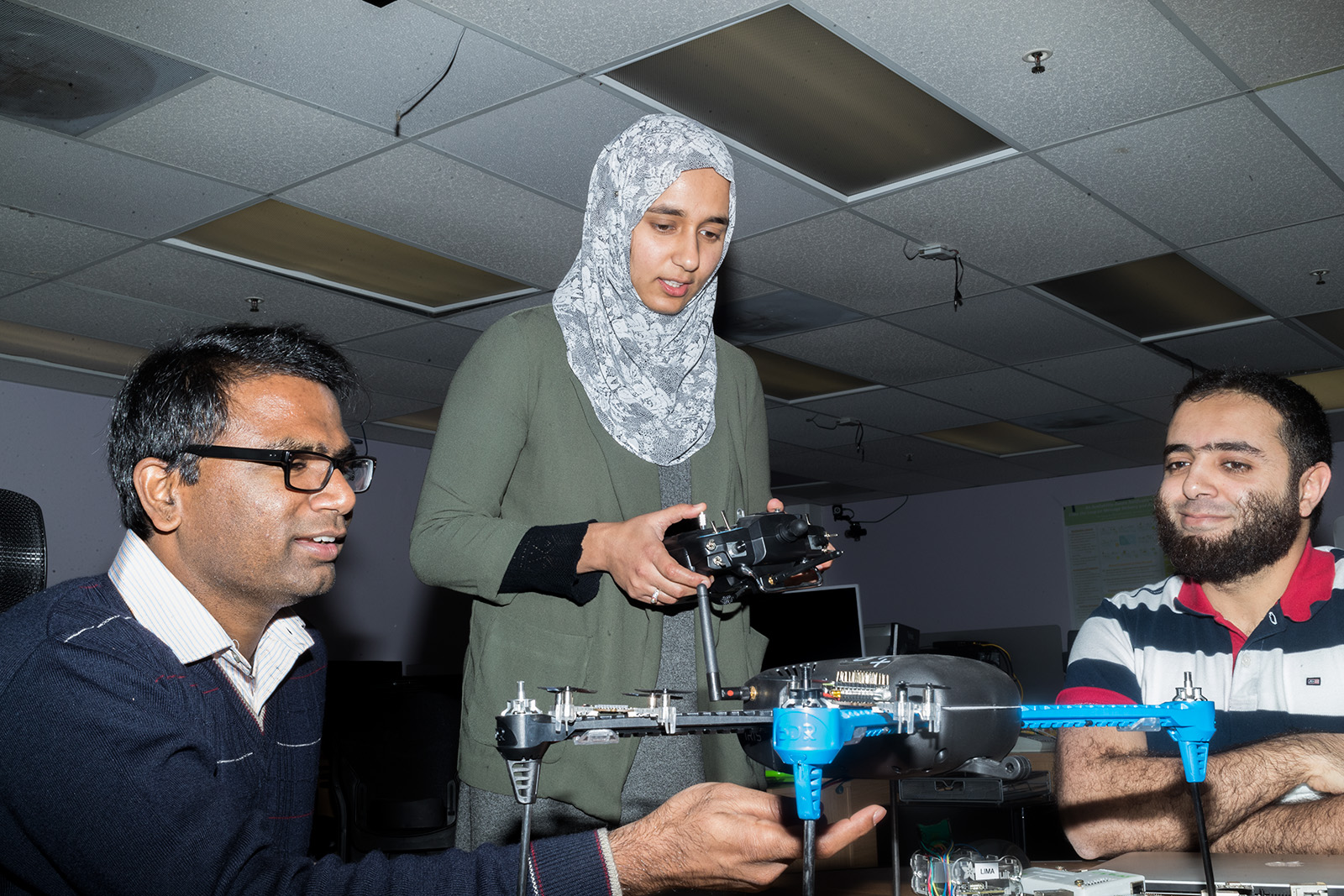 UCLA engineers are researching the use of cyber physical systems in the military, such as CPS-controlled drones to scout dangerous areas or deliver materials for soldiers. (Isa Saalabi/Daily Bruin)

UCLA engineers are researching ways the United States military can use cyber physical systems, an advanced technology that could one day be deployed overseas for safer, robot-assisted operations on the battlefield.

A team of three electrical and computer engineering faculty received $4 million from the United States Army Research Laboratory in October to develop the theoretical foundations of large-scale CPS for future military applications. The team will collaborate with researchers at UC Berkeley, the University of Massachusetts, the University of Illinois at Urbana-Champaign and other universities through the U.S. Army’s larger $25 million Internet of Battlefield Things Collaborative Research Alliance.

Paulo Tabuada, a professor of engineering at UCLA who is co-leading the research, said CPS is a mathematical framework underpinning the invisible computation and interaction between cybercomponents, objects such as smartphones and smart TVs. Cybercomponents, known industrially as the “internet of things,” work together to sense and ultimately manipulate their physical environment, he added.

The researchers will explore how the military could use a city’s existing infrastructure, along with deployed infrastructure, to carry out safer missions, said fellow project investigator and professor of electrical and computer engineering Suhas Diggavi.

The team is working under the assumption that future militaries will be composed of both humans and machines, Tabuada said. In a guerilla warfare situation, CPS-controlled drones or robots could carry heavy loads for soldiers or scout dangerous areas ahead. Troops could also use CPS to hack an enemy city’s electronic systems for reconnaissance or offensive tactics.

“If you can gain access to a city’s grid, like (its) traffic cameras, and use (it) to infer where the enemy may be, (you’ll have gained) very powerful information for a team of soldiers entering this area,” Tabuada said. “We need to orchestrate all these sources of information and make sure they work consistently.”

One challenge in researching CPS for military use stems from the unpredictability of combat scenarios, he added. For example, it may be difficult for troops to conduct reliable CPS operations in rapidly changing adversarial environments where sensors can be moved or destroyed. In addition, the enemy could plant false information within its own grid to deceive the military.

Mani Srivastava, a professor working on the study, said CPS has numerous applications outside of the military. Other researchers are developing CPS designs to improve transportation networks, mobile health and workforce monitoring. Srivastava added his research team is currently working on the use of CPS in buildings and urban spaces to aid energy and water conservation.

Tabuada added CPS could also be used for civilian use in remote healthcare monitoring or smart homes, whose embedded technology can be used to directly manipulate an individual’s surroundings. For example, sensors in a smart home would be able to detect the occupancy of individual rooms and adjust the rooms’ temperature, or redirect the flow of electrical energy to a garage if someone is charging their vehicle.

According to the research team’s abstract, Fragouli is studying the use of defense mechanisms, such as distortion measurements, to foil passive and active attacks on CPS-transmitted information. It proposes that distortion measurements are a resource-efficient way to help stop eavesdroppers from extracting core attributes from systems’ data or disrupting CPS functions.

“Traditionally, security tries to protect bits (of data) so no one can understand what (it says),” Fragouli said. “Now, in wireless systems, what we need to protect is not necessarily the bits but how much an adversary can learn from the system’s actions. Could an adversary, for example, learn whether a smart car is going to go straight or turn?”

Diggavi said CPS allows researchers from multiple disciplines to engage in both theoretical and practical work, enabling them to see the impact of their studies.

“The solution to a CPS problem does not come from innovation in any one individual area. You need to have a deep understanding of communications, networks, security, modeling, physical systems and computation,” Tabuada said. “This makes CPS very different from other areas of research.”