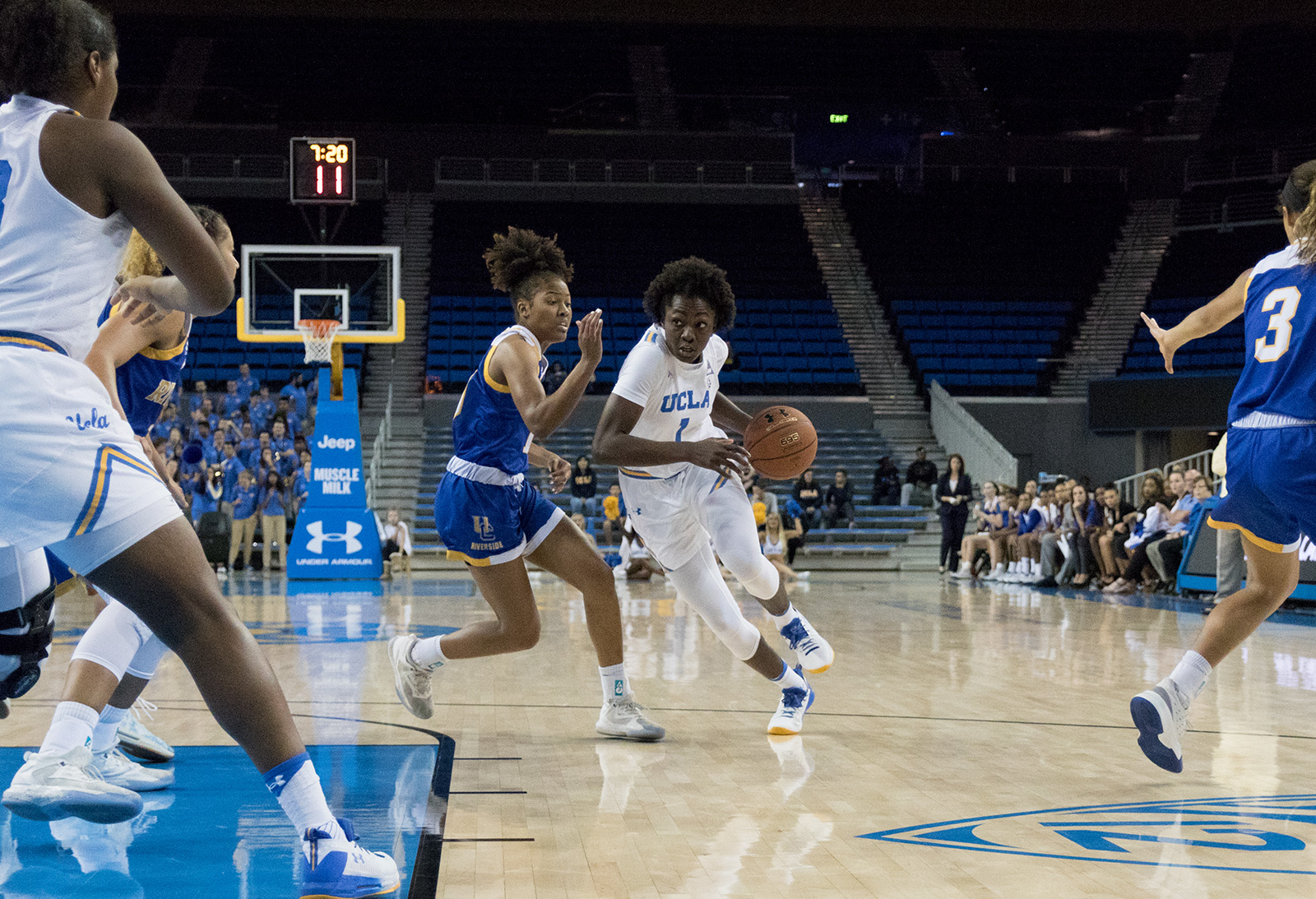 Every Bruin who got minutes Tuesday night was able to contribute.

“We need to learn what (we) do well, how to make plays for each other on a more consistent basis,” said coach Cori Close. “Then we’re going to see more fun results.”

Despite a sluggish start, No. 7 UCLA women’s basketball (6-1) was able to improve its offensive rhythm throughout the contest en route to a 68-48 win against UC Riverside (1-6).

The Bruins, who played their first home game since competing in front of their third-largest home crowd ever as they took on Connecticut on Nov. 11, had a slow offensive start in a near-empty Pauley Pavilion.

“It just felt like one of those days,” said senior forward Monique Billings, despite adding 14 points and 12 rebounds, her third double-double of the season. “I think that’s just something we’re going to have to do and go into practice tomorrow (and focus) on our touch.”

After opening up a 9-0 run, UCLA ended the first period shooting 5-of-17, falling short in attempts to run plays that Close continuously called out.

“We haven’t figured out how to transfer (team chemistry) onto the offensive end of the court on a consistent basis,” Close said.

The Bruins’ defense, however, continued to click on all cylinders, limiting the Highlanders to just three field goals in the first quarter and 17 points in the first half. UCLA’s defense led to easy opportunities for junior guard Kennedy Burke, who finished the half with 4 points, four assists and four rebounds in just seven minutes.

UCLA also pressured the ball successfully, grabbing 15 steals in the game, compared to the team’s season average of 11, which currently leads Pac-12. As a result, the Bruins’ defensive energy was able to get everyone involved on the offensive end, leading to a 34-17 halftime lead.

“I thought (freshman guard Kayla Owens) came in and gave us a spark in terms of her defensive on ball-pressure and hitting some big 3s,” Close said. “It obviously helps everything when we can hit outside shots.”

Owens shot 3-of-4 off the bench, including 2-of-3 from beyond the arc, finishing the night with 8 points and three assists.

Billings reflected on the freshmen’s growth and praised their maturity.

“I think our freshmen are doing fantastic,” Billings said. “I think they’re doing better than I did my freshman year, as far as being poised and accepting the feedback that’s coming to them.”

As UC Riverside began to cut into the Bruins’ lead, UCLA came out of their huddle before the fourth quarter re-energized with offensive firepower, receiving help from the bench. UCLA’s bench players took advantage of their playing time, contributing 23 of the 68 points in the game.