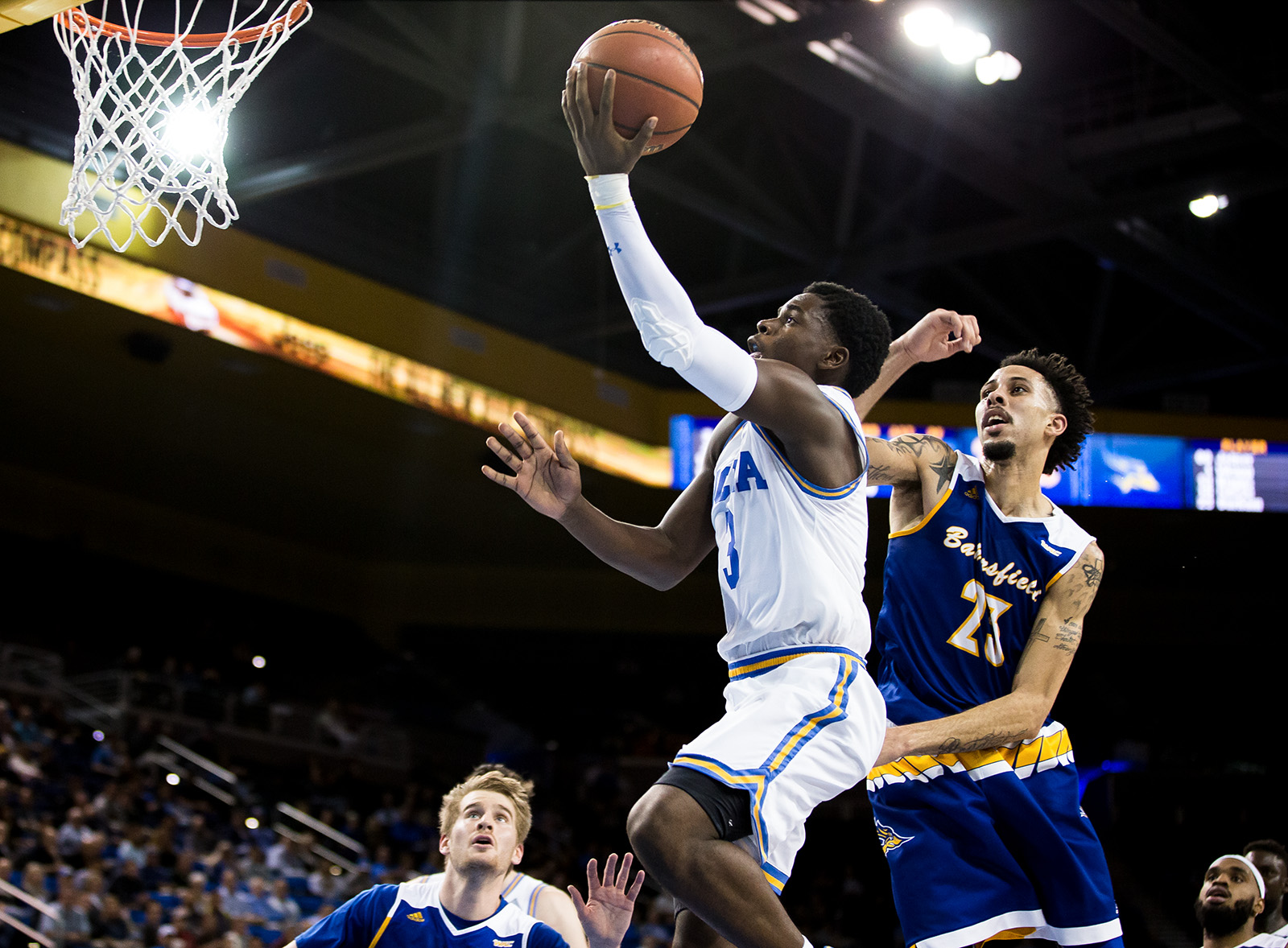 Aaron Holiday led the Bruins in scoring thanks to 7-of-8 shooting in two-point range and 2-for-4 shooting from the free throw line. The junior point guard didn’t make a 3, as the Bruins only shot 2-from-17 from beyond the arc on the night.

It wasn’t pretty, but UCLA men’s basketball grinded out yet another win against a non-Power Five opponent.

The Bruins trailed for the majority of the first half against the Cal State Bakersfield Roadrunners (4-4), but scraped out a two-point advantage at halftime. UCLA (6-1) eventually went on a 9-0 run early in the second half and pulled away for a 75-66 win Wednesday night.

“This was by far, in seven games, … the worst we’ve been offensively,” said coach Steve Alford. “ But I told the team in the locker room afterwards that we showed growth defensively. … We won the game tonight by the way we covered them.”

Cal State Bakersfield started hot from the 3-point range, sinking six of its attempts from beyond the arc in the first period compared to UCLA’s 1-for-10 effort. The Bruins finished 2-for-17 on 3-pointers, with senior center Thomas Welsh and redshirt sophomore forward Alex Olesinski each making one and their guards missing all 13 of their shots.

“We just couldn’t knock down shots and we forced a little bit too many times because they were up in us,” freshman guard Kris Wilkes said. “They just made us to go to the rack more, shoot more contested stuff. I think our defense helped us out a lot in the first half and I think that’s how we stuck with them.”

UCLA held its opponent to 29.9 percent shooting overall, but the visitors still kept the game close through the second half.

The Roadrunners cut their deficit to seven points with less than two minutes remaining, but Wilkes – who entered Wednesday shooting 56 percent from the free throw line – made both of his attempts. Fellow freshman guard Jaylen Hands, who scored all seven of his points from the charity stripe, iced the win with five free throws in the last minute.

Hands returned after missing Sunday’s game against UC Irvine with a left foot sprain. He came off the bench and missed all five of his shots in 24 minutes of action. Alford said that performance reflected the freshman’s rust.

“We didn’t even find out until late last night that he was cleared by (the team doctors),” Alford said. “He didn’t practice Monday or Tuesday after our Sunday game.”

The referees kept the mouthpieces on their whistles warm, calling a combined 44 fouls between both teams. Cal State Bakersfield intentionally fouled in the last couple of minutes and had three players foul out, while UCLA had three players with four fouls each.

The Bruins have also not been able to dominate their lesser-heralded opponents.

Despite facing the likes of Central Arkansas, South Carolina State and UC Irvine, UCLA has yet to hold a double-digit lead at halftime.

Welsh recorded his second consecutive double-double with 13 points and 10 rebounds, while Holiday led UCLA with 16 points. The junior guard was 0-for-5 on 3-pointers but made seven of eight shots inside the line and led the team with six assists.

The Bruins didn’t record an assist until eight and a half minutes remained in the first half. They tallied 10 of their 15 assists in the second half.

“We just needed to settle in, which we did toward the end of the first half,” Holiday said. “We started to move the ball more, but it obviously was an emphasis because we didn’t really pass the ball well in the first half.”