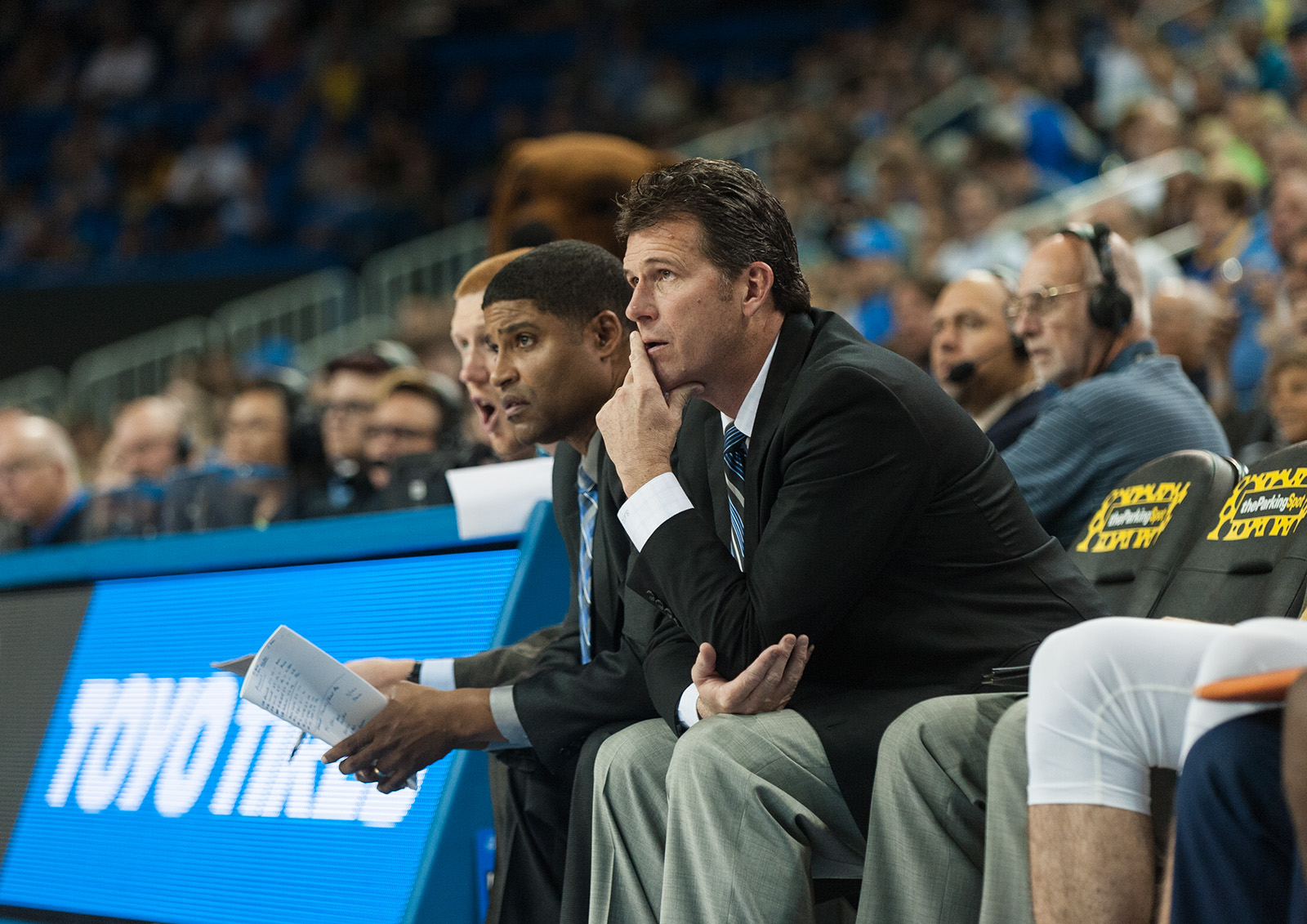 The Bruins are running an even faster offense this year than they did last season, but coach Steve Alford said he thinks this year’s team doesn’t have the experience to play efficiently at that pace. (Amy Dixon/Assistant Photo editor)

Last year’s UCLA basketball team boasted the fastest offense of any power-conference program in the country, with its possessions lasting an average of just 14.5 seconds, per kenpom.com.

This year’s Bruins are even faster – at least for now.

Heading into Wednesday’s home matchup against Cal State Bakersfield (4-3), UCLA (5-1) is averaging just 14.2 seconds per possession, but coach Steve Alford would like to see that number rise.

“I still think we’re a little bit sped up, we’re in a little bit of a hurry offensively,” Alford said Tuesday. “I don’t think we can play at that kind of pace and still be at the efficiency that we want.”

Last year’s team was able to make the break-neck pace work, Alford said, because the Bruins rolled out a more veteran-heavy lineup with just three freshmen in the rotation, who are all now in the NBA.

This year’s squad was projected to rely on six freshmen, though three are suspended indefinitely after having been arrested during the team’s trip to China, and two have redshirted last season.

“Last year’s team had many more veterans to it, a lot less younger players to it,” Alford said. “They really understood the college game and could play at that pace efficiently.”

Alford said UCLA’s performance in its Sunday win over UC Irvine was an encouraging step forward, particularly because the Bruins only turned the ball over seven times.

“We didn’t shoot the free throw well and we didn’t make as many shots as we normally make, but I liked (that game’s) pace, both offensively and defensively … a little bit more than some of the other (games’),” Alford said. “We’ve got to get those turnovers to 11, 12 (per game) consistently. If we can do that, then the speed will take care of itself.”

Freshman guard Jaylen Hands, who missed Sunday’s game with a mid-ankle sprain, is still day to day and his status for Wednesday’s game will be a game-day decision, according to Alford.

The Office of Student Conduct is still in the process of determining how it will handle the case of the three freshman basketball players arrested in China for shoplifting earlier in the month, Alford said. The coach said he was unsure how long the process would take.

Freshman guard LiAngelo Ball and freshman forwards Cody Riley and Jalen Hill are still suspended indefinitely from the basketball team and are not allowed to participate in team activities.

“Getting caught up academically – that’s been their biggest, most important thing,” Alford said. “I’d say 98 percent of what I communicate is, ‘Are you in class?’ (or,) ‘Are you doing what you’re supposed to be doing academically?’”