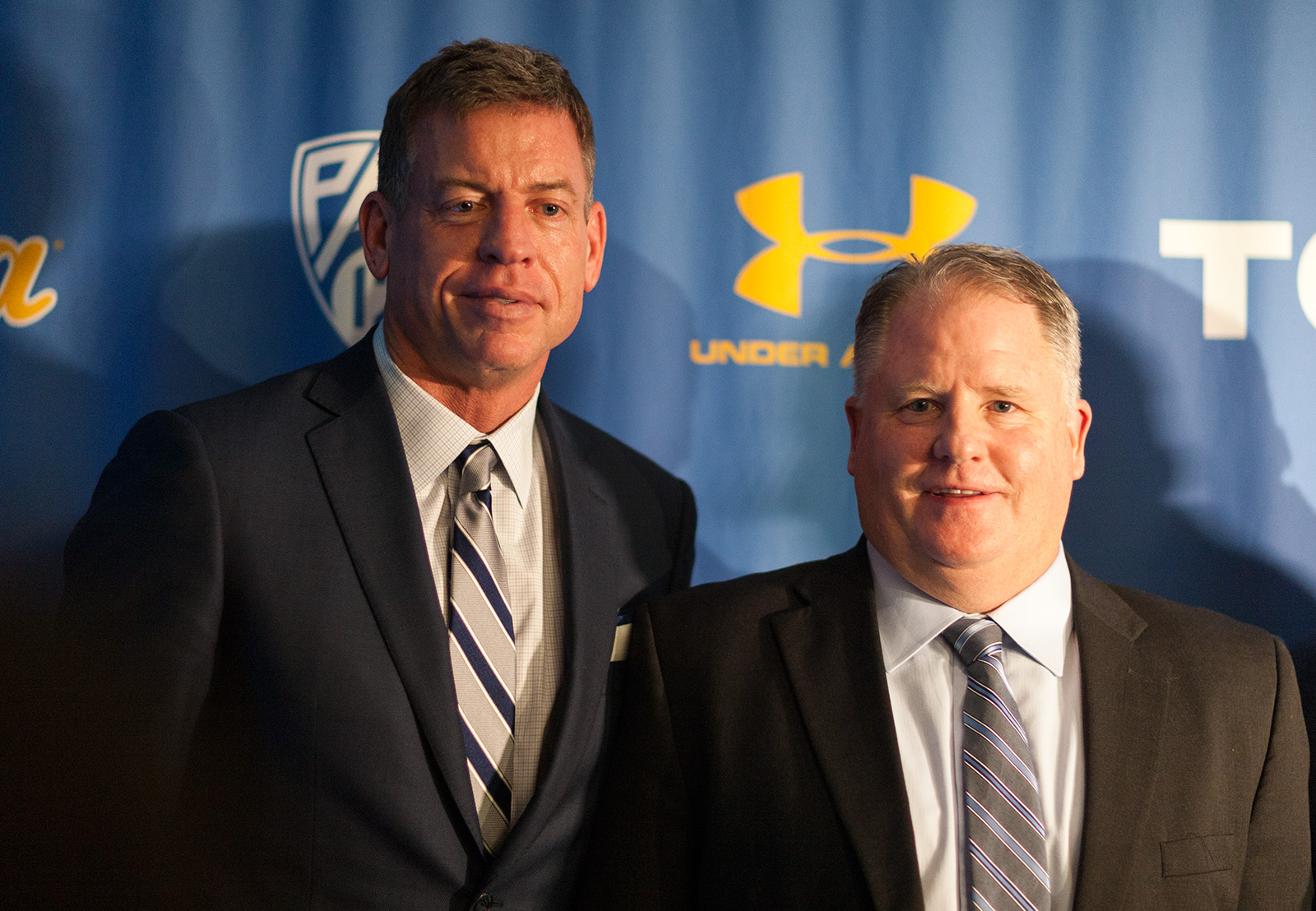 UCLA football great Troy Aikman’s relationship with Chip Kelly got rolling when Aikman was a television analyst and Kelly was an NFL coach,
but got kicked into high gear when Aikman joined the search committee for a new UCLA football coach. (Aubrey Yeo/Daily Bruin senior staff)

When Jim Mora got fired, Troy Aikman got a call.

“Over the years, whenever there’s been a vacancy of the head coaching position here (at UCLA), I’ve generally gotten a call,” said the NFL Hall of Famer and Bruin alumnus.

In the past, Athletics Director Dan Guerrero and others within UCLA Athletics have asked Aikman to suggest candidates. But this time, he was asked to be on the search committee.

“My response to that was, ‘I’d be happy to do it, but I’m going to be pretty active in that role,'” Aikman said.

Aikman had a pre-existing relationship with Chip Kelly, who UCLA announced would be the new head football coach Sunday. Aikman broadcast games that Kelly coached, and even said the Philadelphia Eagles were too quick to fire Kelly after he lost the job nearly two years ago.

“I really clicked with him right away,” Aikman said. “I liked his offensive mind. I liked talking football with him.”

That relationship was what allowed Aikman, who won two Bowl Games as a Bruin quarterback, to serve as the bridge between Kelly and UCLA.

“Obviously (Aikman) was a great quarterback here and a Hall of Famer in the NFL that won Super Bowls, but he’s an outstanding broadcaster,” Kelly said. “Very insightful and really detailed in his work and preparation. I really value his friendship.”

Reports came out early last week that Aikman put on a “full-court press” in convincing Kelly to come to Westwood. At Monday’s press conference, Aikman shared part of why he was so motivated to close the deal.

“I would argue it might be the greatest hire in UCLA history,” Aikman said.

To Aikman, the signing was historic because of the amount of nationwide demand for the coach, including from schools like the University of Florida.

Then-coach Terry Donahue led Aikman to a pair of 10-2 seasons when they were both at UCLA. Aikman said he has the utmost respect for Donahue, but also pointed out that he had never been a head coach before he was hired and was a UCLA alumnus. He also noted that former Bruin head coach Rick Neuheisel was an alumnus.

“I’m not sure why it had gotten to where it had gotten, but we had candidates over the years that were of interest that wouldn’t even interview for this job,” Aikman said.

Aikman iterated that contacts of his from schools all over the country, including people from USC and Florida, have reached out to him to tell him that UCLA got a great coach, and that it had made things tougher on their programs.

When Aikman left UCLA for the NFL, he was picked first overall – a huge moment for Aikman that represented the end of an era for UCLA football. Aikman’s last game as a Bruin in 1987 punctuated a seven-year streak of bowl game wins.

That’s the same amount of bowl games UCLA has won in close to 30 years since.