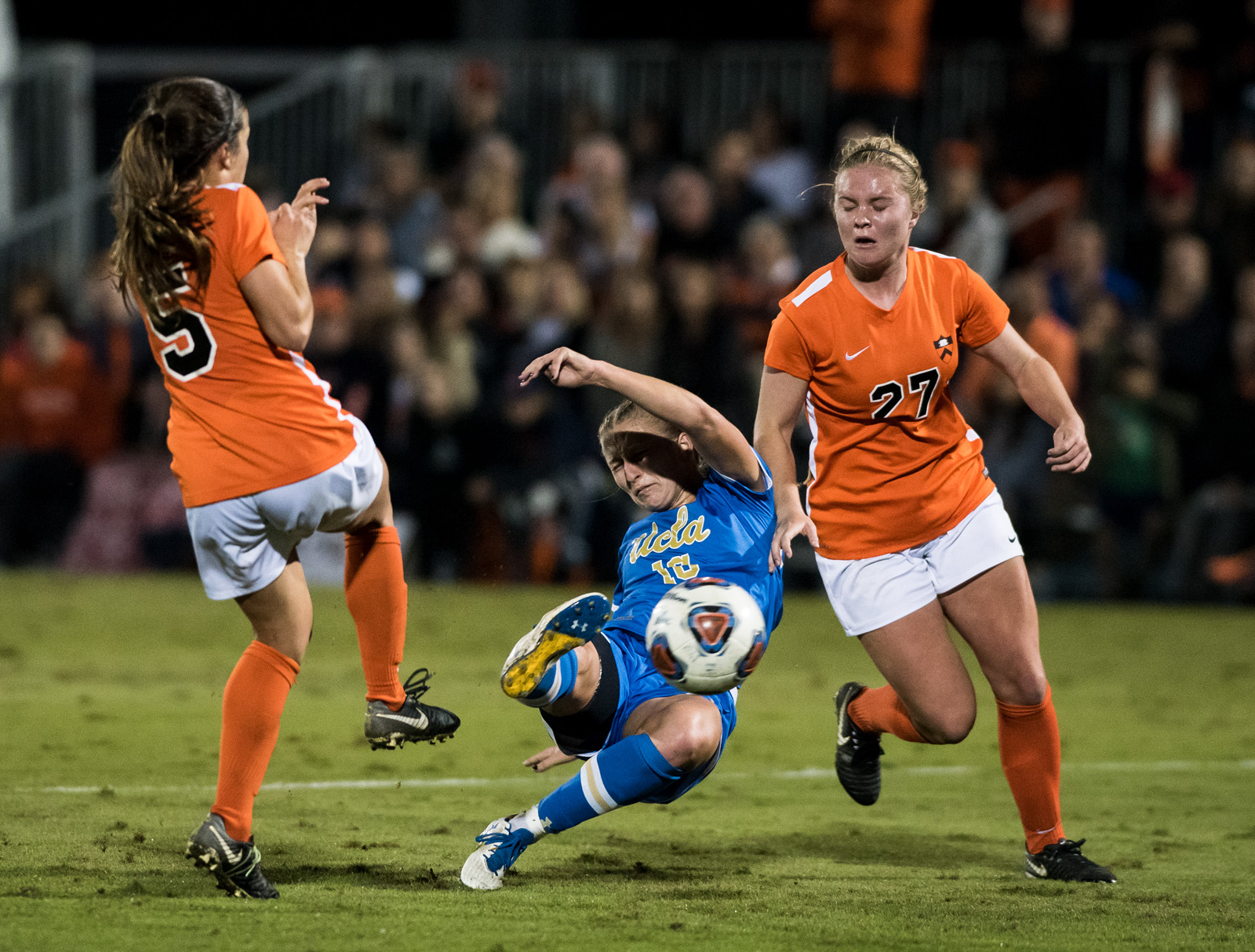 Junior forward Hailie Mace scored two goals for the UCLA Bruins in their win over the Princeton Tigers on Saturday night. With the win, UCLA will head to Orlando for the semifinals Friday, where it will face Duke. (Aubrey Yeo/Daily Bruin senior staff)

UCLA women’s soccer is headed to the NCAA Women’s College Cup for the 10th time in the program’s history.

“It feels absolutely unreal,” said sophomore defender Kaiya McCullough. “I came to UCLA to go to the college cup and win a national championship. To have the chance to do it is an incredible feeling.”

The Bruins dominated the first half.

They controlled possession and pinged the ball around in the final third, searching for the breakthrough. The Tigers struggled to get past the midfield line.

Shot after shot flew at Princeton goalkeeper Natalie Grossi, who was up to the task. Her diving save on redshirt sophomore forward Anika Rodriguez’s shot was the highlight play for the Tigers in the first half.

But given the Bruins’ relentless pressure, a goal seemed inevitable – and one came in the 16th minute.

After a near-miss a minute before, junior forward Hailie Mace headed home a driven cross from senior defender MacKenzie Cerda.

UCLA’s second goal came two minutes later and was the definition of a team goal. Senior defender/forward Zoey Goralski found space out wide and sent a through pass to a streaking Rodriguez, who slid the ball across the face of the goal for freshman midfielder Olivia Athens to score the first goal of her college career.

“We kept the ball, moving it and playing as a team,” Mace said. “No one was trying to do it on their own.”

The onslaught continued. Grossi denied Rodriguez again, and a shot from the top of the box by sophomore midfielder Jessie Fleming hit the woodwork.

The Bruin defense also kept the Tiger attack toothless in the first half, allowing only one shot, which was blocked and rolled safely into sophomore goalkeeper Teagan Micah’s gloves.

“I think that first half was the closest to seeing a team peak, that kind of performance,” said coach Amanda Cromwell. “I thought we were clinical – unlucky not to have maybe three or four in the half.”

Princeton started the second half on a mission, pressing hard and wasting no time getting the ball into dangerous positions.

This time, UCLA had a hard time keeping the ball, giving up attack after attack.

Ten minutes into the half, the Tigers got their reward. They broke on the counter. Princeton’s forward Courtney O’Brien flew down the field with the ball at her feet. Two defenders in front of her and two forwards on either side of her, O’Brien slid the ball to forward Abby Givens, who notched her 12th goal of the season.

“We came out a little flat and were unable to hold the ball and maintain our composure,” Cromwell said. “We have to go back and watch the video to see what was lacking. In the end, we’re going to have to weather some storms of teams getting ahold of the ball and getting shots off.”

UCLA stepped it up a notch after the goal, reclaiming control of the game.

Six minutes later, the Bruins restored their two-goal lead. Mace dribbled past the onrushing Grossi and finished into an open net to collect her second goal of the game and 15th of the season.

In the end, the margin could have been much higher were it not for more heroics from Grossi, who finished with 10 saves on the night, and missed opportunities.

“We gave up a goal. That kind of sucks,” McCullough said. “But I think we did a good job of handling their press and getting out of pressure when we needed to and coming up big when we had to.”

Next up is Duke in Orlando.

Cromwell believes her team is heading into the matchup on a run of good form.

“I think we’re peaking going into the final four, really confident, playing some of the best soccer we’ve played this season,” Cromwell said.