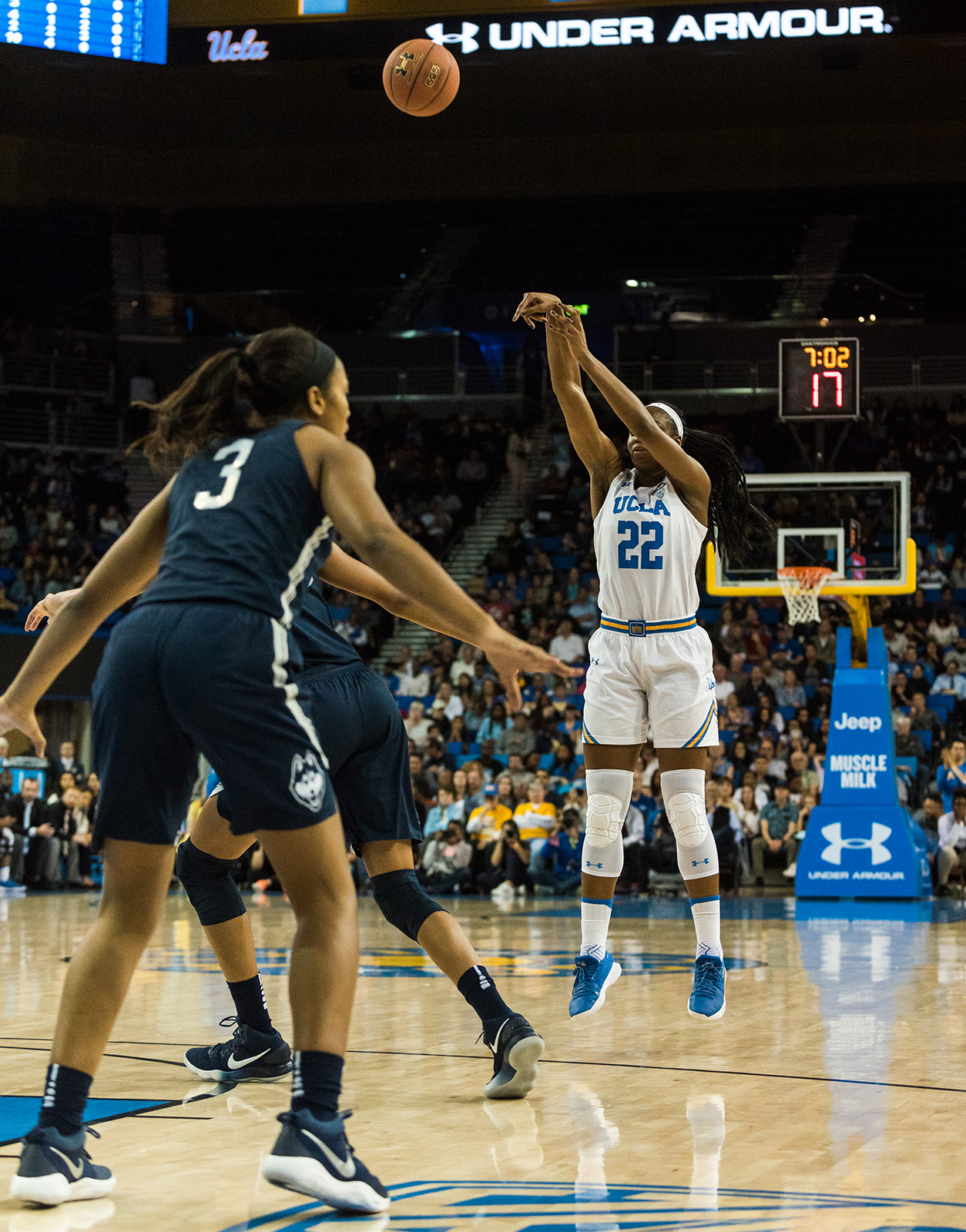 UCLA women’s basketball fell to top-ranked Connecticut 78-60 on Tuesday night. Junior forward Kennedy Burke struggled from the field, shooting just 1-of-10 from beyond the arc and 5-of-19 overall. (Isabelle Roy/Daily Bruin)

Tonight was no different.

Senior Jordin Canada shot just 5-of-16 from the field and had four turnovers, and the point guard placed a lot of the blame on her own shoulders.

“It starts with me,” Canada said. “I didn’t do a good job of setting the tone in the second half, and (the) whole game for that matter, and it definitely showed tonight.”

Connecticut handed UCLA its first loss of the season, snapping the Bruins’ 32-game winning streak at home. This was the second-longest active home winning streak in the nation behind the Huskies’ streak of 67.

Although UCLA’s offense ranked in the top 10 in both field goal percentage at 51.9 percent and points per game at 95.7, the Bruins struggled to get any offensive rhythm going throughout the game, shooting only 34 percent from the field.

“(Connecticut tried) to not let (Canada) and (senior forward Monique Billings) get going north and south, and that’s where we were effective last year against them,” said coach Cori Close.

Billings, however, had one of the Bruins’ more efficient performances, falling one rebound shy of a double-double with 15 points on 6-of-13 shooting and nine rebounds.

The Bruins even attempted 17 more shots than the Huskies, and had seven more offensive rebounds, but were unable to convert them into points. However, Close said the team walked away from this game with an experience to learn from.

“All of the things that were exposed in our game tonight, I believe are completely fixable,” Close said. “I think there’s nothing like a game like this to teach our hearts – coaches included.”

UCLA led 5-2 early in the game but would never lead again. Connecticut went on big runs, including a 9-0 run to end the first quarter, and a 20-0 run spanning the third and fourth quarters.

Close discussed that the Huskies came out crowding the inside on defense, challenging the Bruins to make its outside shots – notably in junior guard Kennedy Burke’s performance.

“It really shows that practice matters,” Burke said. “I made a lot of lapses, mental lapses, on the defensive end and offensive end, so I just really have to take practice seriously now.”

Burke shot 26.3 percent from the field attempting 19 shots, but she continued to take shots despite the margin increasing throughout the game, with the largest Connecticut lead being 29 points with seven-and-a-half minutes left in the fourth quarter.

In four games, Connecticut faced its third opponent from the Pac-12, arguably one of the most competitive conferences in the NCAA with six out of 12 teams ranked in the top 25.

The Huskies also played their third game in five days, on the road, and without their best shooter – guard Katie Lou Samuelson. The All-American sprained her left foot against Cal, and sat on the bench Sunday in their win against Maryland.

“(Connecticut) was the better team tonight, and they obviously set the standard of excellence,” Close said. “We’re a really good basketball team but there is no margin of error with a great basketball team.”

UCLA will travel to Las Vegas as they prepare to take on Kansas State on Friday in the South Point Thanksgiving Shootout.