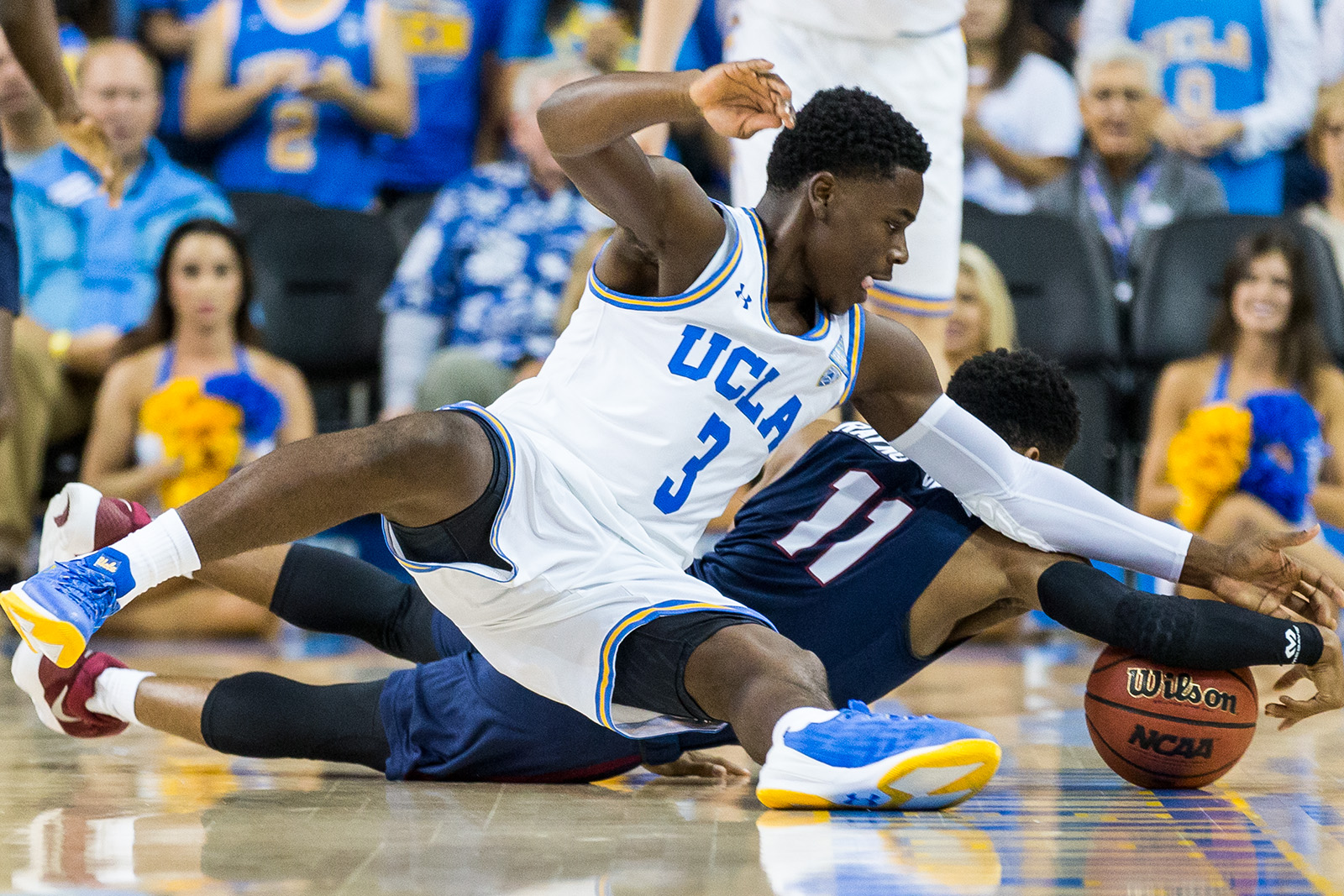 Aaron Holiday got a layup off with less than a second left in Tuesday’s game, sending UCLA men’s basketball to a 2-point victory. (Aubrey Yeo/Daily Bruin senior staff)

Aaron Holiday dribbled past a Thomas Welsh screen and had the ball poked away.

For a split second, the junior point guard nearly lost UCLA’s chance to go ahead in the final seconds of its tied game against Wisconsin. But Holiday regained his dribble, blew past Badger Ethan Happ and laid the ball off the backboard and in, just as the shot clock buzzer sounded.

Holiday’s game-winner ended an up-and-down 72-70 victory for No. 23 UCLA (4-1) over Wisconsin (2-3) in the third-place game of the Hall of Fame Classic in Kansas City, Missouri.

The Bruins spent most of the game playing catch-up – they either trailed or tied the game for nearly 16 consecutive minutes spanning the first and second halves.

But after the Badgers built their game-high lead of 12 with less than two minutes left in the first half, the Bruins scored 16 of the game’s next 18 points to take the lead. From there, neither team could finish off the other.

Coach Steve Alford’s squad built a 9-point lead with 13 minutes left in the game, but Wisconsin flipped that to its own 6-point lead with less than four minutes remaining.

Then came Holiday’s takeover – he scored UCLA’s last 10 points of the contest to finish with a team-high 18 points.

Four other Bruins scored in double figures, but turnovers again were a problem as the Badgers scored 21 points off 19 turnovers. Senior forward Gyorgy Goloman and redshirt sophomore guard Prince Ali combined for 11 turnovers, and Ali was additionally guilty of committing a technical foul in the first half where he shoved a Wisconsin player to the ground.

Had the game gone into overtime, Alford would have only had five full-health players available from his usual eight-man rotation late in the second half. Goloman and freshman guard Kris Wilkes both fouled out, and freshman guard Jaylen Hands twisted an ankle by landing on a Wisconsin player’s foot after a layup attempt.

Wilkes had his worst game of the season after scoring in double digits in all of UCLA’s previous four games. He only scored 4 points on 2-of-5 shooting to go with four rebounds.