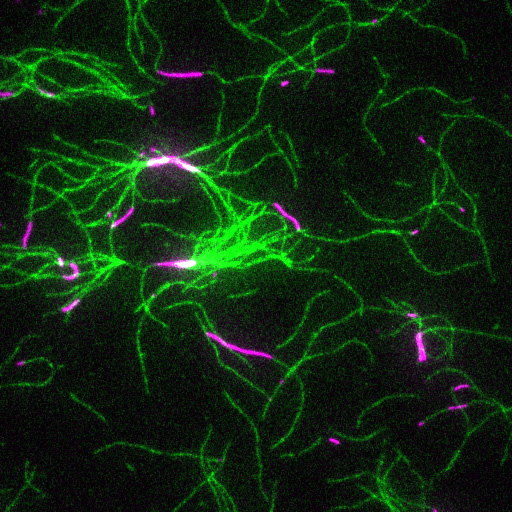 UCLA researchers have found the protein FHOD1 actually increases the assembly rates of actin, which is a protein involved in muscle contraction and cell connectivity. (Courtesy of Aanand Patel)

UCLA researchers have found a new role for a protein involved in muscle function.

In a study published Nov. 10, researchers in the Department of Chemistry and Biochemistry discovered a new role for the human protein FHOD1 in accelerating the assembly of actin, one of the main proteins in the structure of muscles.

Researchers, led by Aanand Patel, a doctoral student in molecular biology, demonstrated that FHOD1 is effective in forming an actin cluster but not as effective in making it grow longer. According to the study, researchers said the result was unexpected because other studies had shown that FHOD1 actually decreases rates of actin assembly in rabbits.

To understand FHOD1’s role in actin assembly, the researchers examined individual actin molecules on a microscope slide to count the number of actin molecules growing and calculate their growth rate.

The researchers also found that FHOD1 only accelerated actin assembly for certain kinds of actin not involved in muscle contraction in rabbits. Patel said he thinks other researchers may have overlooked FHOD1’s biological role because proteins similar to FHOD1 usually accelerate actin assembly for actin involved in muscle contraction.