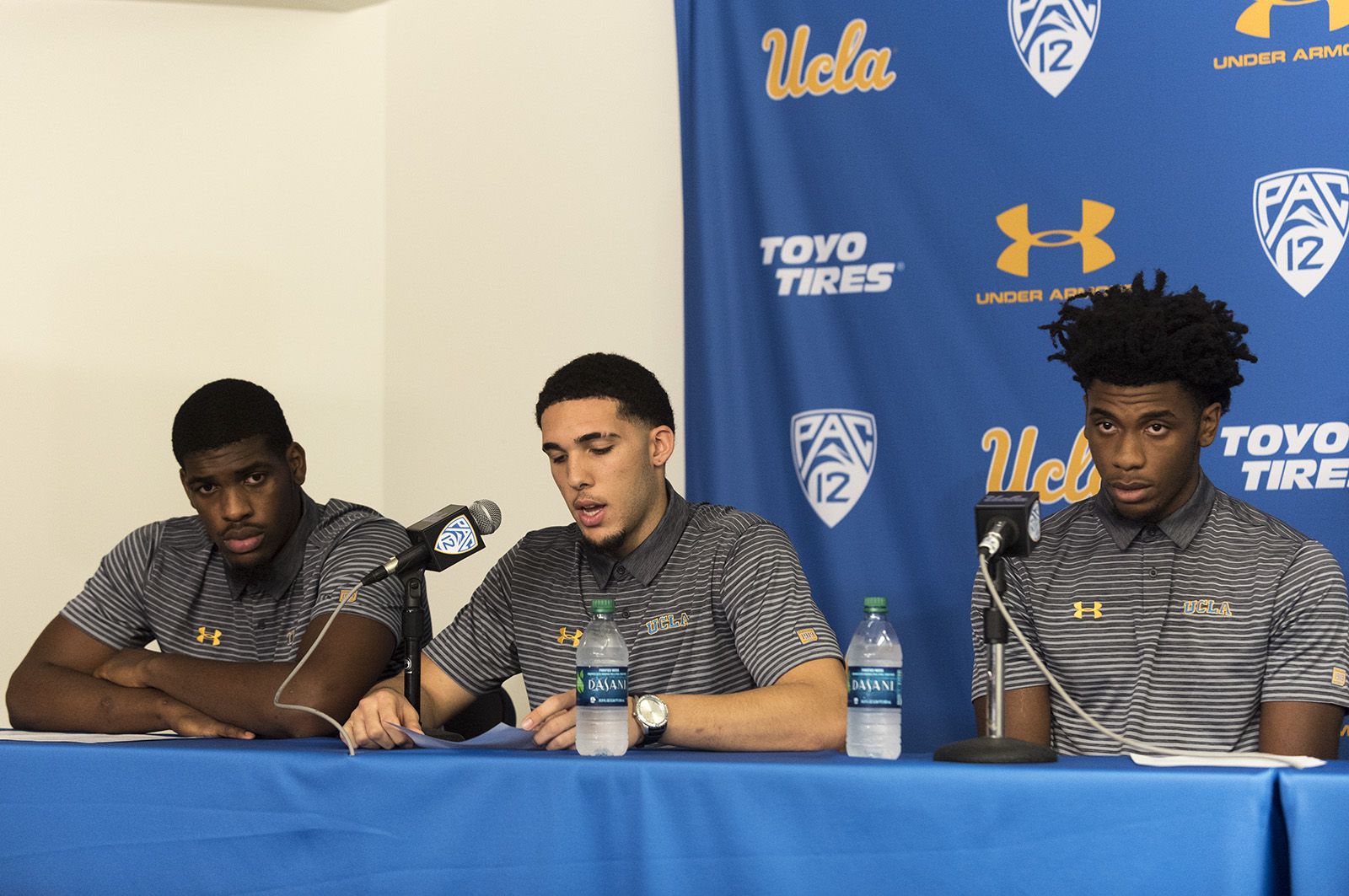 UCLA men’s basketball held a press conference Wednesday morning. Cody Riley, LiAngelo Ball and Jalen Hill admitted to shoplifting from three stores in China and apologized to the team, the university, their families and the public. They also thanked President Donald Trump for his involvement. (Michael Zshornack/Photo editor)

Coach Steve Alford announced Wednesday morning that the three UCLA men’s basketball freshmen arrested in China will be suspended from the team indefinitely.

Cody Riley, LiAngelo Ball and Jalen Hill gave short prepared statements to the media, in which they admitted to shoplifting and apologized to the UCLA community, their families and the team. They also thanked Chinese authorities for treating them with respect and President Donald Trump and the United States government for intervening.

All three players reiterated they believe their crime does not reflect their characters. Alford said he thinks all three players are good young men who exercised an inexcusable lack of judgment.

“These three young men will remain suspended indefinitely from our program as we work through the review process with the university’s Office of Student Conduct,” Alford said. “At some point, they may be permitted to join team workouts, practices and meetings, but that timeline is yet to be determined.”

Alford and Athletic Director Dan Guerrero announced that UCLA Athletics and the Office of Student Affairs are investigating the incident. Riley, Ball and Hill remain enrolled as students, and Alford said they will cooperate fully with the university’s review of the matter and will use this time to focus on academics.

Guerrero added that the bail for the three players was approximately $2,200, and the university self-imposed that the players had to stay in the team hotel in Hangzhou, China, while authorities investigated the crimes. All three players had their passports taken and have been placed under travel restrictions.

UCLA also provided the legal services and other resources to get the players released on bail and eventually out of the country.

“On what should have been a very positive, memorable trip for our entire team and for our university, their irresponsible actions overshadowed that opportunity,” Guerrero said.

None of the five participants in Wednesday’s press conference revealed if any UCLA players, coaches or representatives saw the reported surveillance video of Riley, Hill and Ball committing the crime.

No questions were taken at Wednesday morning’s presser.