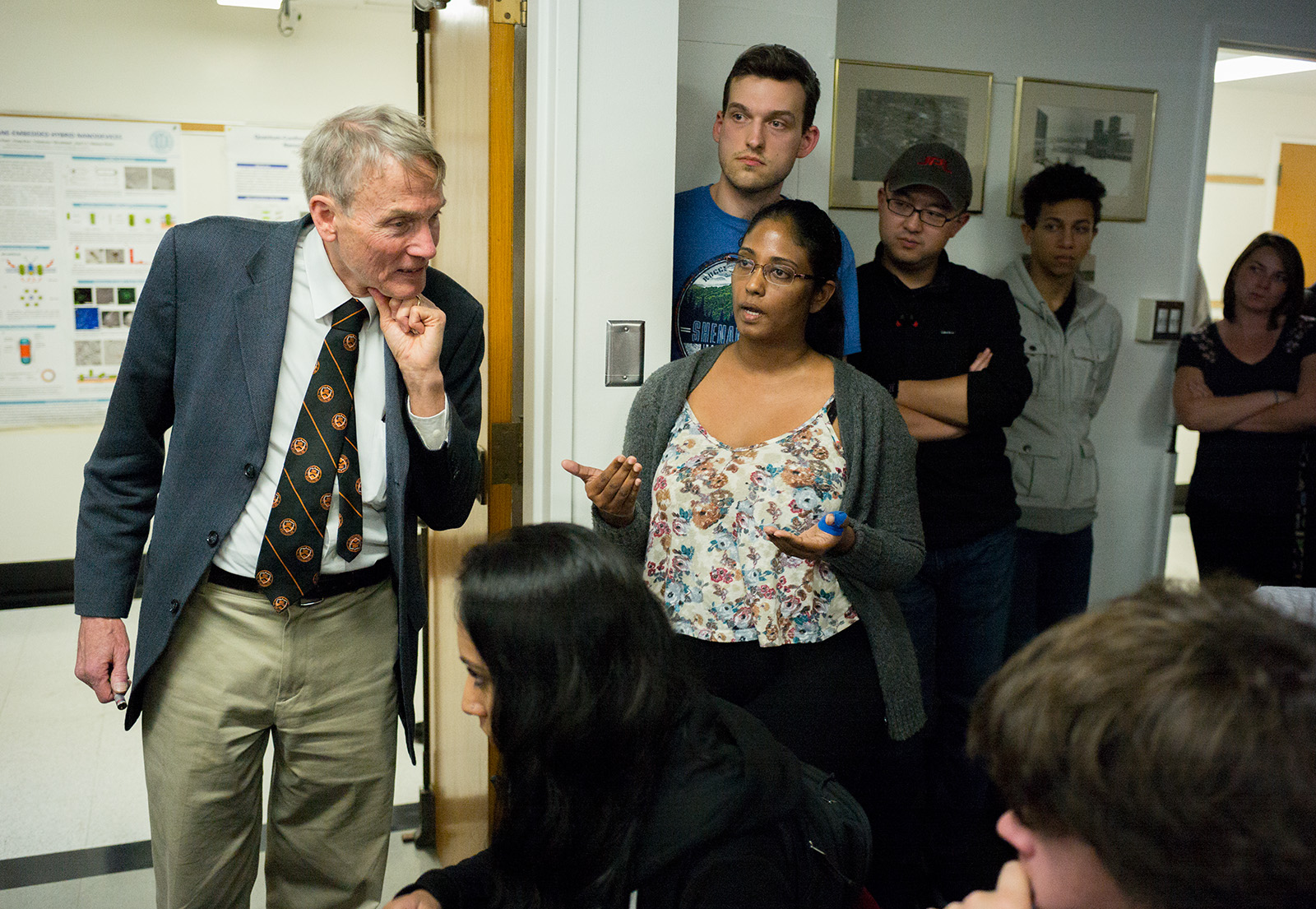 William Happer, a professor emeritus in physics at Princeton University, gave a seminar called “Some Thoughts on Climate” to more than 90 chemistry graduate students and faculty in Young Hall. Happer said that carbon dioxide is beneficial to the environment and not a significant contributor to climate change.

Peter Felker, a professor in chemistry and biochemistry at UCLA, invited Happer to UCLA because of Happer’s accomplishments in the field of atomic physics. Felker said Happer was allowed to choose the topic of his presentation, and he chose to speak on climate issues.

“We invited him because he’s a talented physicist … (and) there is a tremendous amount of physical chemistry in climate science,” Felker said.

Happer, known for hiscontroversial belief that increasing levels of carbon dioxide does not have severe environmental consequences, said he thinks computer models have inaccurately forecast dramatic increases in temperature.

“Hysteria over climate change is driven by computer models, not by observation,” he said.

Happer said models of climate change predicted a 0.2 degrees Celsius increase over the last decade, but actual data has shown that temperature has increased by only 0.05 degrees.

He added he thinks carbon dioxide is only a minor contributor to climate change,

“What does carbon dioxide do when you increase it? The answer: not very much,” Happer said. “(Even) if you double carbon dioxide levels, you get a very, very little change (in warming) – roughly 1 degree Celsius.”

Several students who attended the event said they were skeptical of Happer’s conclusions.

During the Q&A session, one student said Happer’s statements on temperature change neglected to include the effects of increased levels of water vapor in the atmosphere. Happer said the data did not reflect any increase in water vapor levels.

“(Looking at the data,) that doesn’t seem to be happening,” Happer said. “Since the (water vapor) model doesn’t agree with observations, then it’s wrong.”

Taylor Aubry, a graduate student in the department of chemistry and biochemistry, asked Happer to consider whether humans can continue to rely on fossil fuels. Happer said he acknowledged the detrimental effects of fossil fuels on the environment and added he thinks humanity will need to find new sources of energy in the next couple hundred years.

“When you burn fossil fuels, there are real pollutants, but carbon dioxide isn’t one of them,” Happer said. “I’m 100 percent (in support) for finding better energy sources.”

Another student asked Happer why his views went against the majority of the scientific community on climate change. Happer said scientists can sometimes be wrong.

“At the Salem witch trials, every one of those judges had a Harvard degree,” he said. “Scientific consensus is often wrong.”

Many students said they were frustrated with Happer’s dismissal of the scientific consensus on climate change.

“There’s a big difference between scientific consensus and what’s true,” Alex Bradley, a biochemistry graduate student, said. “Most of what Happer said was scientifically valid but didn’t fit with other scientific data.”

Aubry said she entered the seminar with an open mind, but was disappointed with Happer’s presentation.

“I hoped to hear the other side and see if they had any logical arguments,” Aubry said. “(But Happer’s talk was) a lot of obfuscation of data and the consensus of climate scientists without much proof.”

“(In cell biology), we look at (and) discuss models and try to test them,” he said. “Happer never fully presented a competing model. He never presented something that explains current levels of warming.”

Some students, however, said they think the presentation was scientifically valid.

“(When it comes to climate change), I think most people haven’t looked at the data for themselves,” Jahanbakhsh said. “They just repeat what’s been told to them.”

Happer said that he has no competing financial or political interests, but he did point out he is a member of the CO2 Coalition, an organization meant to educate policymakers and the public about the benefits of carbon dioxide.

Bradley, who advocates for science education and policy, and organized the Los Angeles March for Science in April 2017, said he was disappointed with Happer’s disregard of the larger body of climate change data.

“There is no harm in (presenting) an opposing viewpoint, but there is harm in claiming that an opinion supersedes a mountain of data that contradicts it,” Bradley said. “As a political agent, Happer increasingly undermines the crucial role of science in policy.”

Happer said he thinks students should analyze data on climate change for themselves.

“Whenever you get a chance, look at the data,” Happer said. “(It’s) on the internet.”