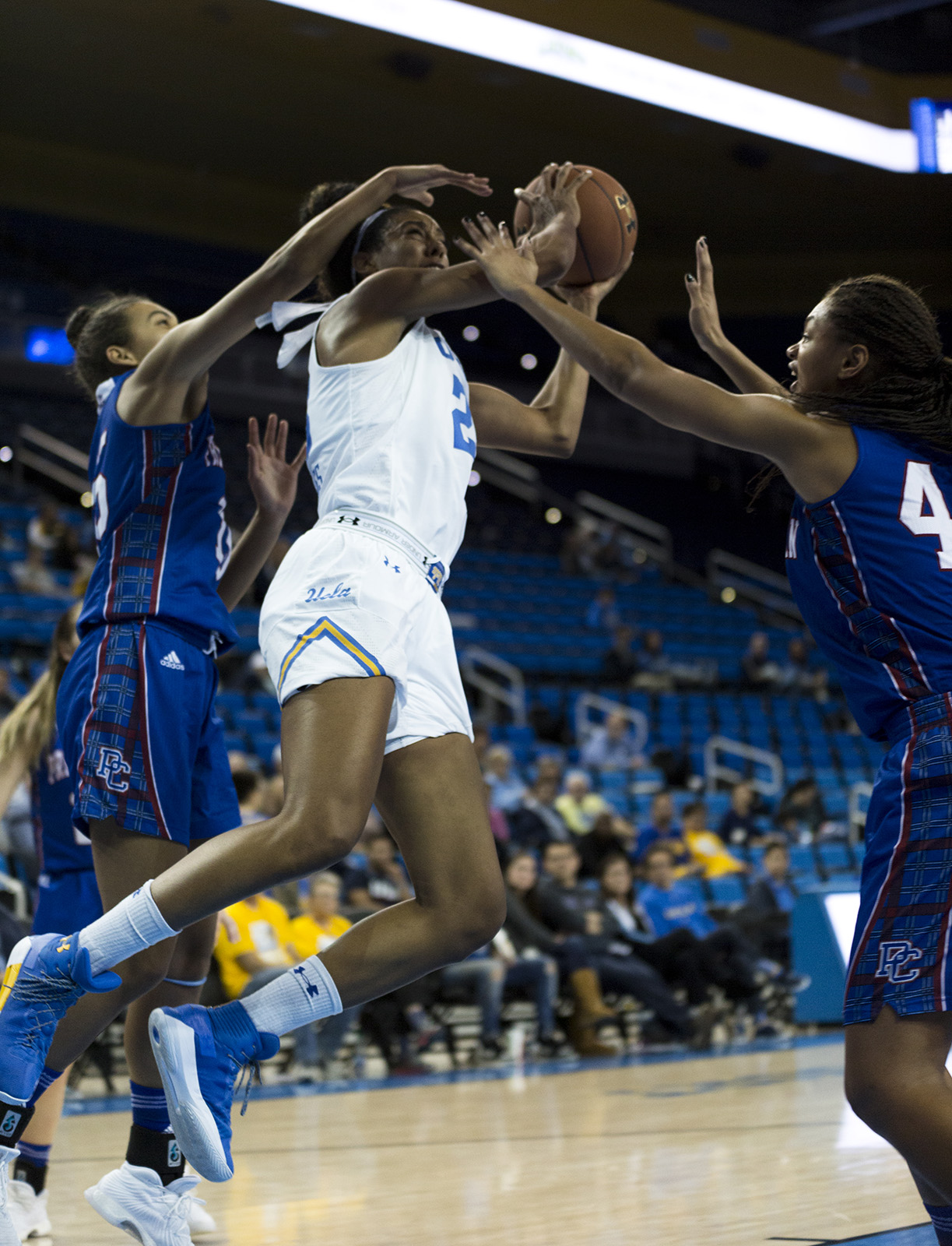 The Bruins won by a healthy margin, but to coach Cori Close, the scoreboard didn’t tell a winning story.

“I’m disappointed with our effort tonight,” Close said. “I didn’t think we were as focused as we needed to be.”

No. 8 UCLA women’s basketball (2-0) defeated the Presbyterian Blue Hose (0-2) 76-40 on Sunday afternoon. The Bruins had a well-distributed scoring load, and they continued to force turnovers at a high rate, converting 20 Blue Hose turnovers into 30 points.

The Bruins offensive output fell short of their record-setting performance Friday, when they scored 129 points. While UCLA still shot over 50 percent Sunday, they attempted 22 fewer shots against Presbyterian than against San Jose State something Close believes stems back to their defense.

“We didn’t make sure to impose our will defensively to create the style we wanted to create,” Close said. “And if you don’t, that’s what’s going to happen, we’re going to have to go deeper into the shot clock … and it snowballs from there.”

One of the bright spots for the Bruins was senior forward Monique Billings, who led the team with 12 points. Billings played one of the few clean games for the Bruins, with no turnovers or fouls.

Freshman guard Chantel Horvat, who scored 10 points on 4-for-5 shooting from the field and two-of-two from the 3-point line, tallied two turnovers.

“I think I’ve got a lot of things to work on,” Horvat said. “Continuing to be physical, crashing the rebounds, being proactive on defense, making sure I’m always there and pressuring the ball.”

The Bruins’ streaky performance continued in the fourth quarter, when they went almost five minutes without making a field goal. Though UCLA would outscore Presbyterian in the quarter, coach Todd Steelman was satisfied with his team’s effort.

“I felt like we were resilient,” Steelman said. “I told them to be responders, not reactors, and I felt like we consistently did that towards the end of the game.”

“At the end of the game, it’s like, what’s there to lose?” Storey said. “You start taking those open shots and just get into your rhythm.”

Outside of Horvat, the Bruins’ freshman class tallied only 16 points. After the game, Close was focused on their improvement.

“It’s easy to just feel so overwhelmed and overtaken and taken by the moment, but the reality is, hey, things happen,” Close said. “Swish your feet in the pond and get out, move forward.”

Junior guard Kennedy Burke, who scored 11 points, was also disappointed with the freshmen, and put some of the blame on her own shoulders.

Senior guard Jordin Canada injured her knee in the third quarter, but coach Close said it was nothing serious, and that she should be ready for the Bruins’ next game Saturday against No. 3 Baylor (2-0).