Women’s soccer opens up tournament play with victory over SDSU 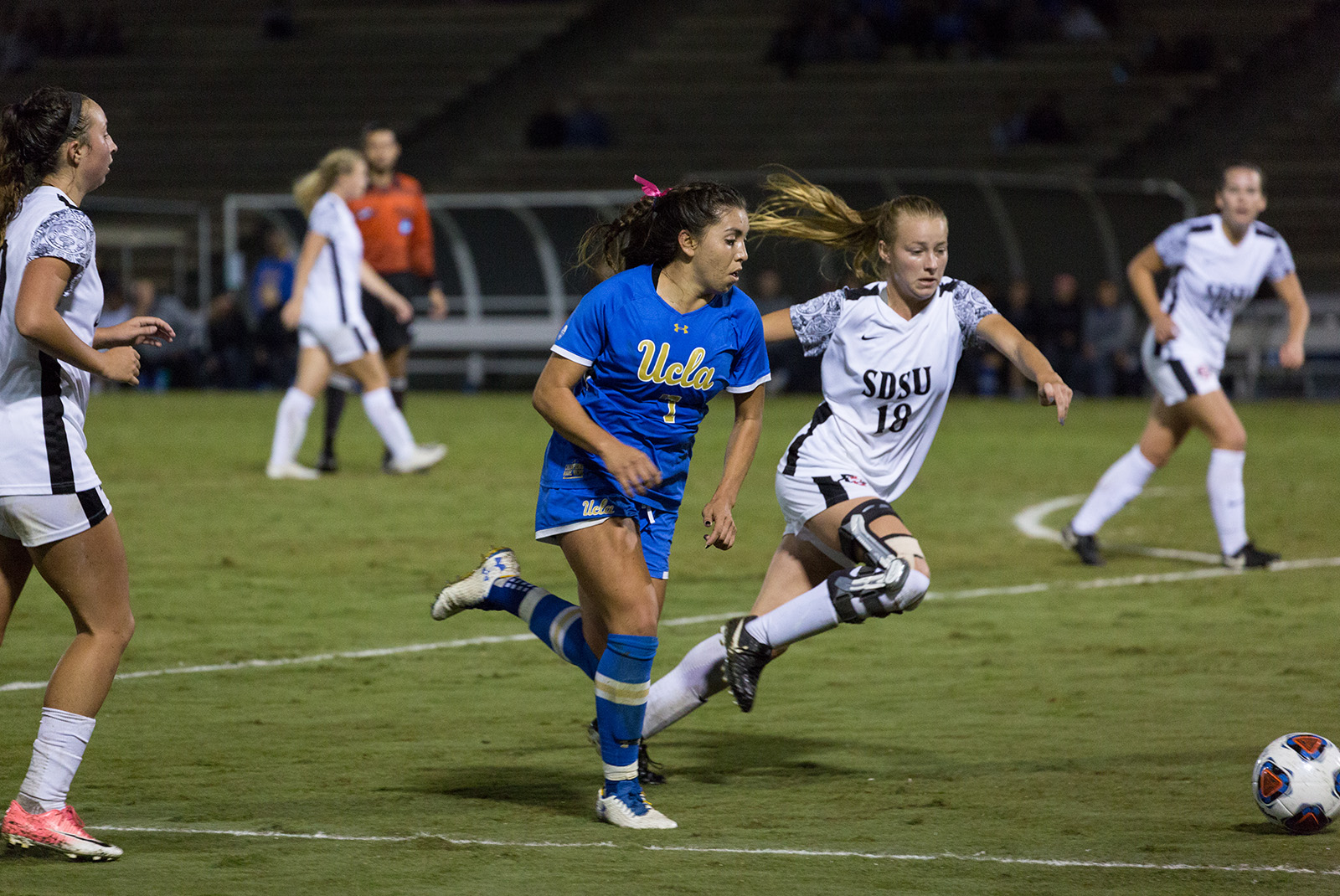 Redshirt sophomore midfielder Anika Rodriguez scored the first goal for the No. 2 seed Bruins in their 3-1 win over the San Diego State Aztecs on Friday night. (Edward Figueroa/Daily Bruin)

The Bruins started well, as the Aztecs tried to sit back and wait to break on the counter, and UCLA wasted little time jumping out to an early lead.

In the 16th minute, the Bruins were awarded a free kick just outside of the box. Redshirt sophomore forward Anika Rodriguez and freshman forward Ashley Sanchez lined up to take the kick. Sanchez ran past the ball, leaving it for Rodriguez, who placed the ball into the top-right corner. San Diego State goalkeeper Gabby English was rooted to her spot, becoming a bystander watching the ball sail into the net.

“It’s always nice to score a goal,” Rodriguez said. “I saw the space and it’s all about placement (from that distance).”

UCLA continued to control possession throughout the first half.

Redshirt senior winger Zoey Goralski, junior forward Hailie Mace and senior defender MacKenzie Cerda sent in cross after cross without success. One nearly led to a goal, but a double save from English kept her team from falling behind even further.

Sophomore goalkeeper Teagan Micah maintained the Bruins’ lead with a quick reaction when the Aztecs nearly stole one against the run of play.

“I was happy about the first half except that I thought we could have finished one or two more,” said coach Amanda Cromwell.

The flurry of crosses continued in the second half, with one leading to UCLA’s second goal.

Cerda found space on the left flank and hit a driven ball to the edge of the six-yard box. Junior forward Julia Hernandez got her head onto it, leaving English helpless to keep it out.

Despite the success, Cromwell felt the team could have converted more of the crosses.

“I would’ve liked to have been more dangerous on crosses,” Cromwell said. “We had more opportunities to score off crosses and that’s something we need to do moving forward.”

Two goals down, San Diego State pushed to get back into the game. UCLA turned the ball over in its own third.

Aztec forward Mia Root collected the ball on the left side and dribbled towards the center. At the edge of the box, Root sent a curling ball that looped over Micah and into the net.

“We left ourselves open a few times on the counter,” Cromwell said. “They got one on one of our giveaways in the defensive third. Any good team is going to pounce on those and (Root) hit a great shot.”

After giving up the goal, the Bruins put their feet down. The Aztecs struggled to maintain possession and faced an attack determined to finish off the game.

“It’s always great to see the team flip a switch,” Rodriguez said. “We weren’t going to let them be the last to score and we wanted to get the extra one to put a dagger in it.”

In the 85th minute, Cerda drove the stake into San Diego State’s playoff hopes. She hit a swerving shot into the corner of the net from a difficult angle.

“The build-up was really good,” Cerda said. “(Freshman midfielder) Olivia Athens found me on the outside, and I was able to take a touch in and find space for an open shot.”

UCLA advances to the second round of the NCAA tournament, which they will host at Drake Stadium once again next weekend.

When asked what she wanted to see moving forward, Rodriguez kept her answer simple.