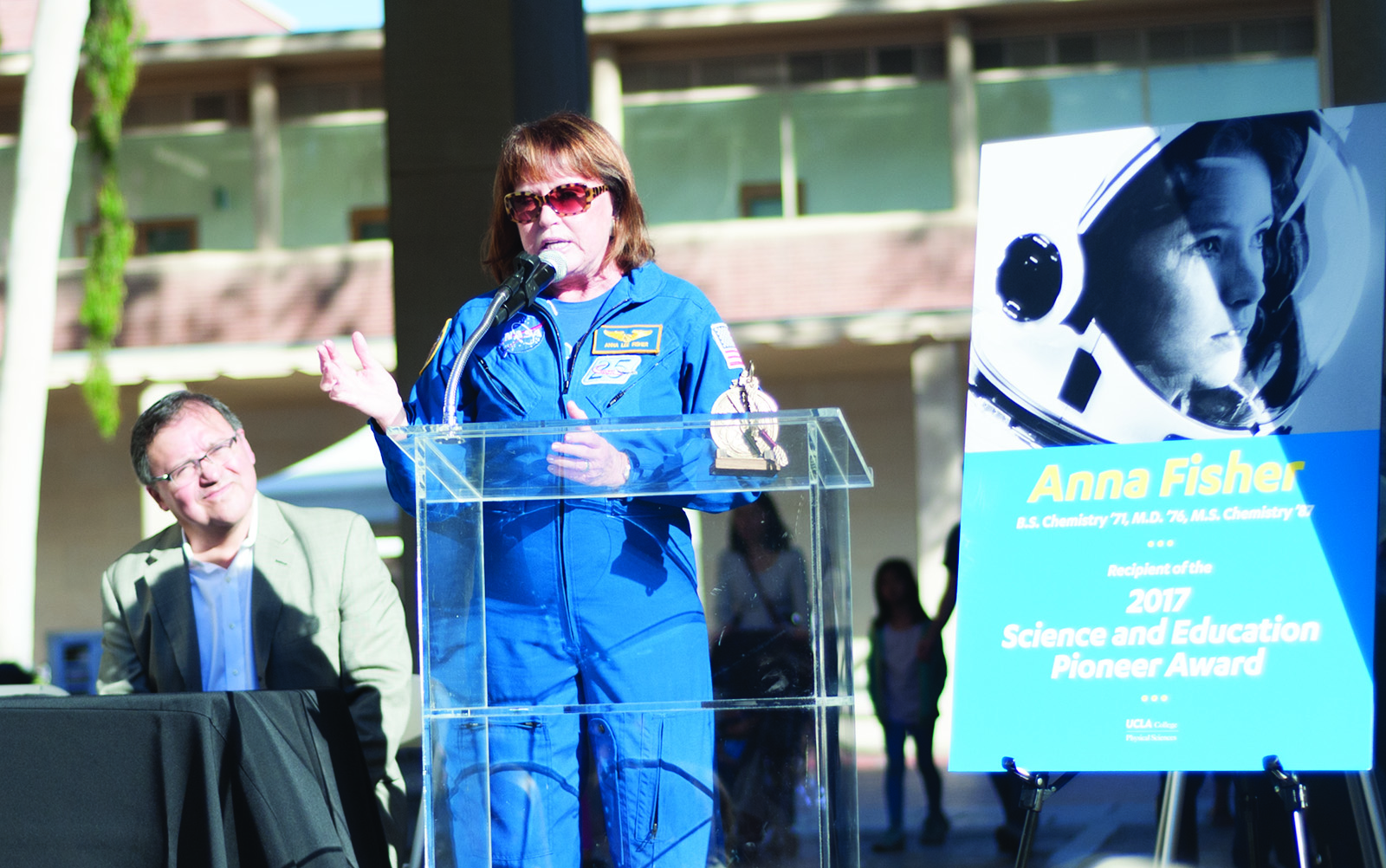 Anna Fisher, a UCLA alumna and the first mother in space, had attended a NASA meeting to prepare for flight three days after giving birth. (Amy Dixon/Assistant Photo editor)

A recently retired astronaut, who is also a UCLA alumna, encouraged children attending a science festival Sunday to pursue an education in science, technology, engineering and mathematics.

Anna Fisher, who flew a successful mission for NASA in 1984 and became the first mother in space, received UCLA’s first Science and Education Pioneer award at the Exploring Your Universe festival in the Court of Sciences. Fisher received three degrees from UCLA between 1976 and 1987.

“I felt so prepared going to NASA with everything I had learned to do here (at UCLA),” Fisher said at the ceremony. “Education is the key that opens doors. … Get a good education and then get prepared for whatever life has to offer you.”

Fisher said she first dreamed of becoming an astronaut in seventh grade after listening to Alan Shepard speak on the radio during his 1961 suborbital flight that made him the first American in space.

Fisher went on to be the first person in her family to attend college, earning a bachelor’s degree in chemistry in 1971 and a medical degree in 1976 at UCLA.

“My family couldn’t afford to send me across the country for school, and UCLA back then was reasonably affordable,” Fisher said. “UCLA was the only option, the only school I applied to, and I’m incredibly grateful I was accepted.”

After graduating from UCLA, Fisher learned NASA was recruiting astronaut candidates for the first time since 1969, and would consider female candidates with science and medical backgrounds. NASA selected Fisher as one of its 35 candidates in 1978.

“NASA was looking for people with just the background I had,” Fisher said. “I was so lucky to be in the right place at the right time with the right credentials.”

Fisher embarked on mission STS-51A on the space shuttle Discovery in 1984. The mission’s crew successfully deployed two communication satellites and recovered two other satellites from orbit. Fisher logged 192 spaceflight hours during the mission.

“Ours was a particularly challenging flight and to have it go so flawlessly at an early stage of the flight program was amazing,” Fisher said.

The flight occurred 14 months after Fisher gave birth to her daughter, Kristin Fisher, making her the first mother in space. Anna Fisher attended a NASA meeting to prepare for the flight only three days after giving birth, she said.

“I was assigned to my flight two weeks before I delivered, and I wanted everyone to know I wasn’t going anywhere,” Anna Fisher said. “I made a commitment, and I wanted to go.”

Anna Fisher spent the 14 months before her flight making as many videos with her daughter as possible in case she died during the mission, she said.

“Leaving Kristin was probably the hardest thing I ever did … and we videoed so much her first year because I wanted her to at least know who I am,” Anna Fisher said. “Today, she’s in broadcast journalism, and we say it’s probably because she was on camera so much when she was young.”

After her flight, Anna Fisher served as chief of the Space Station branch, assisting with development of the International Space Station. She returned to UCLA to earn a master’s degree in chemistry in 1987, and worked on display development for NASA’s Orion Multi-Purpose Crew Vehicle, which is intended to carry astronauts into deep space, until she retired in April 2017.

Anna Fisher said one of the highlights of her career was collaborating with the space agency in Russia, a country that had only recently been an enemy of the United States at the time, to develop the International Space Station starting in 1996.

Jean-Luc Margot, chair of the earth, planetary and space sciences department, said he thinks Anna Fisher was a logical choice for the pioneer award because she uses her status as a public figure to encourage people to learn about space sciences and other scientific fields.

He added Anna Fisher is a member of the Physical Sciences Board of Advisors and repeatedly gave guided tours of the Lyndon B. Johnson Space Center to UCLA alumni during her career.

Anna Fisher said she plans to return to UCLA whenever she is invited in the future, and will continue to encourage students to pursue their interests in space and STEM careers. She added she is excited for the birth of her first grandchild, for whom she has already bought a flight jacket.

“One of our codes of conduct (at NASA) is once an astronaut, always an astronaut,” Anna Fisher said. “I feel an immense gratitude for the education I received and I consider it a privilege to try and encourage young people – but women especially – to pursue STEM careers.”