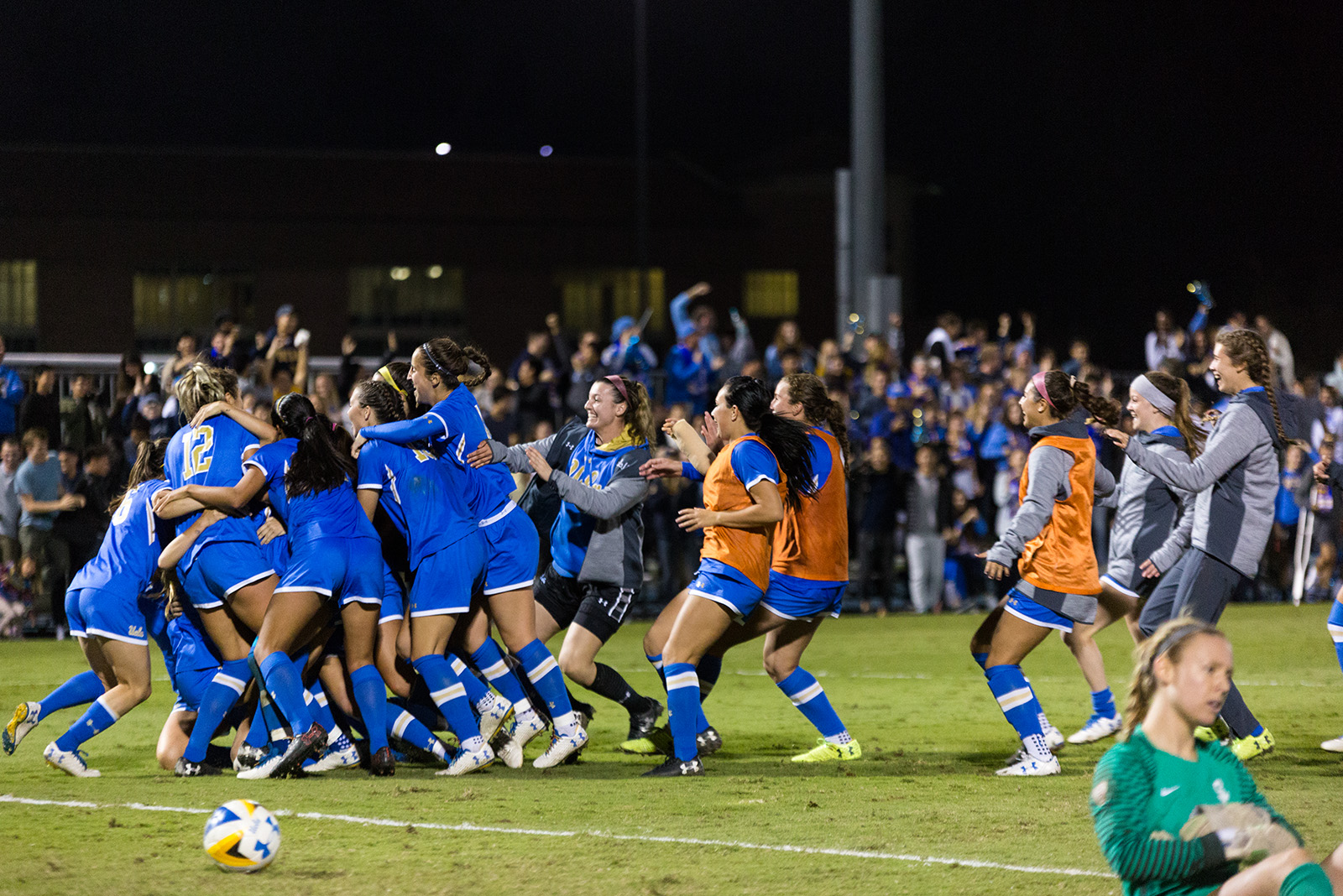 No. 5 UCLA women’s soccer defeated corsstown rival USC for the second year in a row, in overtime by a score of 3-2 on Friday. (Amy Dixon/Assistant Photo editor)

But as overtime entered its second minute, redshirt sophomore forward/midfielder Anika Rodriguez received the ball on the top of the box. No defender in front of her, she charged into the open space.

Two USC defenders rushed to close her down and the goalkeeper started to come off her line, and it seemed like Rodriguez had the game winner in her sight.

Then, she cut the ball back to the penalty spot, where freshman forward Ashley Sanchez was unmarked. Sanchez took the shot. It hit a defender and bounced over the line.

“It’s unreal,” Sanchez said. “I really didn’t think (Rodriguez) was going to pass that ball, but (she did) and it went in.”

Sanchez did not share the same positive emotions about the Gatorade shower she received after the game.

“Not good,” Sanchez said. “I did not like that too much.”

The match was a physical battle between two teams from start to finish. A victory was not inevitable for UCLA, and looked unlikely when USC jumped out to a quick lead in the 10th minute.

Trojan midfielder Nicole Molen got on the end of an almost uncontested cross and looped the ball over a helpless Bruin senior goalkeeper Siri Ervik.

It didn’t take long for the Bruins to find an equalizer.

In the 25th minute, UCLA’s sophomore defender Kaiya McCullough took the ball and pushed forward into the attack. Just outside of the box, she let loose with a hard low shot that the goalkeeper couldn’t stop from finding the bottom left corner.

USC reclaimed the lead before halftime. UCLA failed to clear a corner and the ball fell to Molen near the 6-yard box and she notched her second goal of the game.

“That was a really good corner,” said coach Amanda Cromwell. “(Ervik) hasn’t been in a whole lot of games. Given more game experience, I think she comes out and punches that.”

Down 2-1 at the half, the Bruins were in danger of dropping their third game in five matches heading into the NCAA Tournament. They came out in the second frame and pinned the Trojans to their back third.

Then, Rodriguez pressed a USC defender and stole the ball. She dribbled into the box, waited for the goalkeeper to commit, and rolled the ball into the net.

“We knew we could catch them sleeping a little bit,” Rodriguez said. “We knew if we sneak-attacked them and pressed their back line, we could get some loose balls and that’s what we did. I definitely got a nice chance on frame.”

The Bruins continued to press for goals. After being outshot 9-4 in the first half, they flipped the script, outshooting the Trojans 7-2 in the second half.

However, 80 seconds into the first overtime period, the game was over.

UCLA came back from two one-goal deficits to claim a confidence-boosting win to close out the regular season.

“That’s a great sign. This team is super resilient,” Cromwell said. “We know we can score goals, so we never lose our confidence. We just put ourselves in a hole.”