No. 6 UCLA women’s soccer takes down No. 16 California in tight game 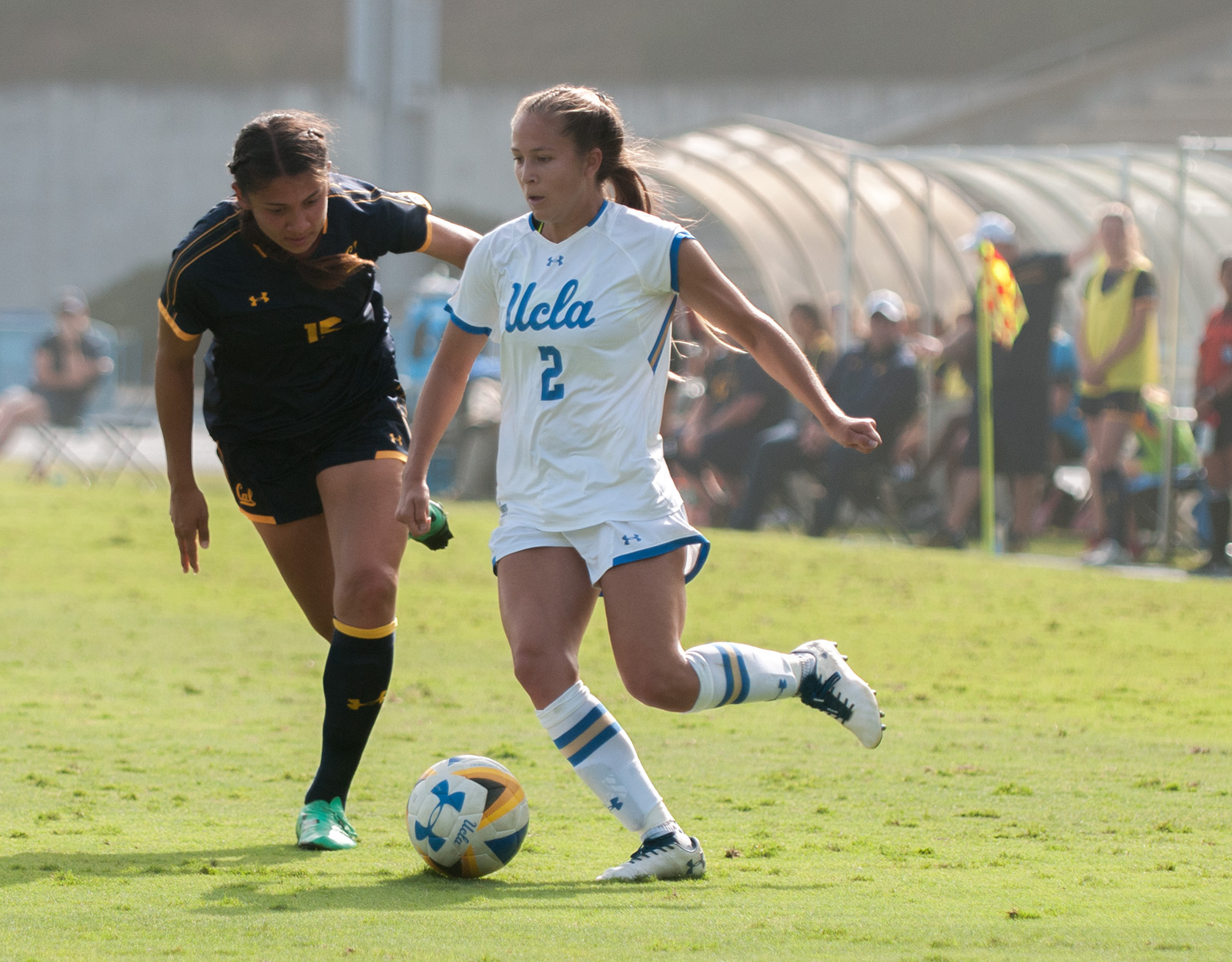 Freshman forward Ashley Sanchez was the only player in uniform Sunday afternoon who was able to come up with a goal. The No. 6 Bruins would take the game by a score of 1-0. (Axel Lopez/Daily Bruin)

Freshman forward Ashley Sanchez delivered with a display of patience and individual talent.

In the 57th minute from her left forward position, Sanchez stopped a lobbed ball from distance. She then worked her way into the penalty area where the freshman took another touch that ricocheted first off an incoming Cal defender, back to her chest, continuing its path.

Sanchez restlessly kept her run as another Cal defender made her way toward the Bruin, but Sanchez let the defender run past her.

“I knew (sophomore defender) Kaiya (McCullough) was going to hit a long ball and I took a touch and knew that the girl was fighting to my left side, it kind of bounced up,” Sanchez said. “I didn’t want to shoot it right away, so I beat the next girl and hit on frame.”

Sanchez hit the ball directly at Golden Bear goalkeeper Emily Boyd, but the shot had enough pace that Boyd was unable to stop the attempt.

“I have as much confidence as a freshman can have. I think that I’m playing well and meshing with the team,” Sanchez said.

The forward – who has youth national team experience – proved to be a problem for Cal’s left back throughout the afternoon, creating numerous opportunities for UCLA’s offense.

“She shows composure when she’s getting pressed and things are really tight,” said coach Amanda Cromwell. “Her touch, her skill, she’s so slippery with the ball.”

Boyd kept the Golden Bears in contention throughout the match making eight saves including a couple diving efforts. The goalkeeper was in excellent form preventing a number of clear goal scoring opportunities, as the Bruin offense persistently attacked the Bears defensive third, but her inability to prevent Sanchez’s shot cost the Bears the game.

Following a loss to No. 1 Stanford, Sunday was another opportunity for UCLA to matchup with a ranked opponent as the regular season comes to an end.

The Bruins shot the ball 19 times, including nine on goal but a combination of Boyd and the crossbar kept the first half scoreless.

UCLA had a number of clear goal scoring opportunities but the ball would not go into the net.

In the 18th minute, a corner from senior defender MacKenzie Cerda made its way through the crowd into the back end of the penalty area where sophomore midfielder Jessie Fleming headed the ball toward the goal where the goalkeeper was nowhere to be found but a Cal defender was perfectly placed on the goal line, heading out the attempt.

In the 36th minute, a set-piece shot by Fleming was denied by Boyd as the goalkeeper dove left from the middle of the goal and saved the attempt by punching the ball out of bounds.

Cal also missed out on a few goal-scoring opportunities, including one in the 25th minute. On a Golden Bear counterattack midfielder Kelly Fitzgerald found herself alone on the left side of the penalty area with sophomore Bruin goalkeeper Teagan Micah out of position but Fitzgerald, who was running full speed toward the ball, misfired left.

By halftime, UCLA had 10 shots compared to Cal’s four.

The Bruins backline held their ground throughout the match making few mistakes and defending the counterattack well. After the goal UCLA kept possession of the ball and ran out the clock.

“Our backline was in sync. Cal has amazing players with great speed, dangerous attacking players,” Cromwell said. “Kaiya and (freshman defender) Karina (Rodriguez) are playing the best, they had an excellent weekend including the Stanford game. (Micah) is also playing well.”

“The team played well we communicated with each other and looked out for one another,” Micah said. “You can’t ask for a better performance than that.”