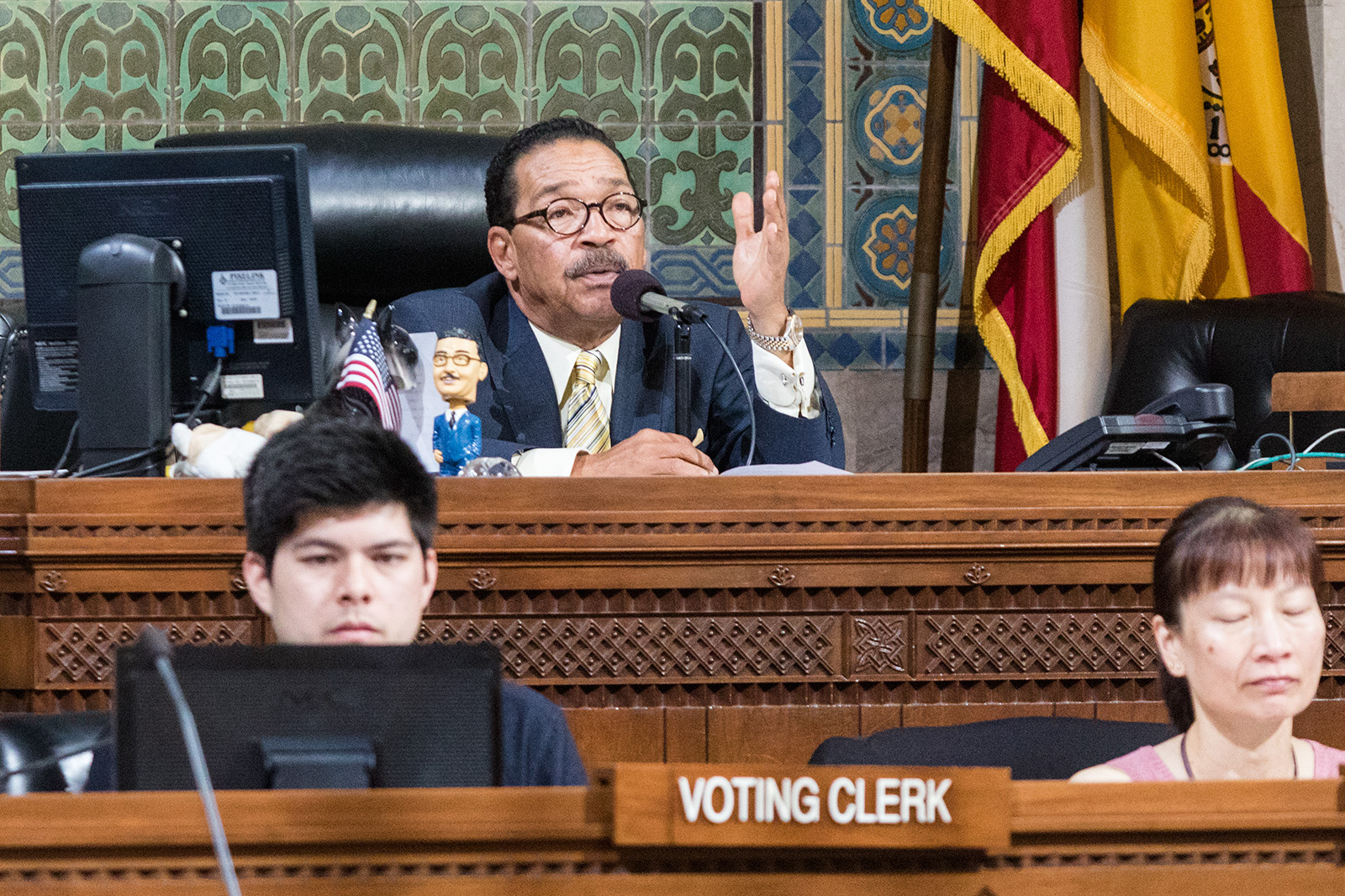 Herb Wesson, president of the Los Angeles City Council, proposed an ordinance that would make any violation to rules posted on public buildings a misdemeanor trespassing, which could result in a $1,000 fine or six months in prison. The Public Safety Committee will vote on the ordinance at its meeting next week. (Daily Bruin file photo)

The City of Los Angeles will consider a proposal at its meeting Nov. 8 that could criminalize speaking out of turn at city council meetings.

The city council’s Public Safety Committee planned to vote on an ordinance last week that would make it illegal to break rules posted on signs in civic buildings, libraries and public parks, but postponed voting on the ordinance until the next city committee meeting. Under this ordinance, initially proposed by Council President Herb Wesson, people violating these rules would be committing misdemeanor trespassing and could serve a six-month prison sentence, be fined $1,000 or both.

Melanie Ochoa, a staff attorney at the ACLU, said she thinks the proposed ordinance is a continuation of the city council’s efforts to curb freedom of speech.

“(The) city council had previously expressed concerns against comment and commenters who they believed had offended them in some way,” she said. “There was already a concern about this new law being applied in a way that was discriminatory, based on what people’s comments were.”

In the letter, the ACLU cited previous attempts by police to arrest people at city council meetings. In 2016, LAPD officers arrested an 81-year-old man for speaking off topic and Melina Abdullah, a professor at California State University, Los Angeles and Black Lives Matter activist, for speaking over her allotted time. Both speakers were arrested but not charged.

Members of the ACLU said they think the proposed ordinance would give Los Angeles police the authority to charge people who speak out of turn with misdemeanors.

Ochoa said she thinks the ordinance’s ramifications are difficult to predict because it enables any sign posted in a public building, library or park to become law. Such signs could include a time allotment for speakers at city council meetings.

“We don’t know exactly what this ordinance would do,” she said. “It criminalizes things that people engage in on a regular basis and pose no actual threat to public safety.”

Jim Newton, a lecturer in the communication studies department and Luskin School of Public Affairs, said he thinks there is a need for order in council meetings but does not support the proposed ordinance because he thinks the city council already has sufficient authority to remove disruptive individuals from its meeting room.

“I sympathize with the folks that are trying to run these meetings,” said Newton, who spent many years covering city council while working as a reporter at the Los Angeles Times. “People can be very rude – there are reasonable limitations on this meeting.”

However, Newton said he thinks the proposal unnecessarily expands the definition of trespassing.

“Trespassing to me is wandering around city hall after hours or breaking in,” he said. “That’s criminal and ought to be.”

UCPD Lt. Kevin Kilgore said UCPD would not be obligated to enforce the ordinance if the city passes it because UCLA and the surrounding area have its own set of rules.

“We don’t subscribe to (Los Angeles) city ordinances because they aren’t applicable to us,” Kilgore said.

He added individuals who are not students or faculty are already subject to arrest for trespassing if they cause a disturbance on campus property.

The city’s public safety committee plans to review the proposal at its next meeting Nov. 8.

Newton said he thinks the ordinance, if approved, would grant the city unnecessary authority.

“Arresting people for violating those rules is more power than a government needs,” he said.