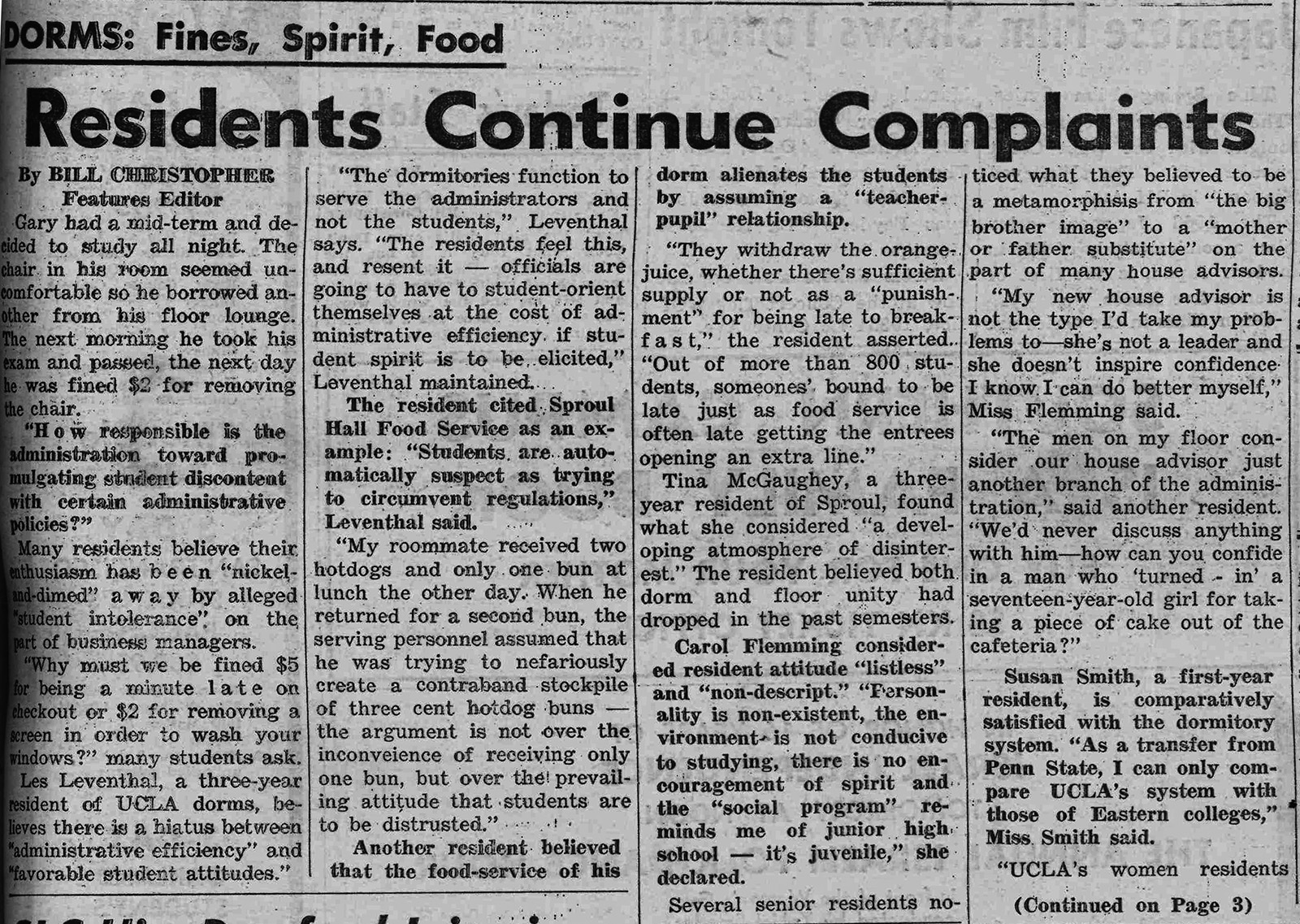 Joe Bruin had a midterm and decided to study all night. The chair in his dorm room seemed uncomfortable, so he borrowed one from his floor lounge. The next morning, he took his exam and passed. He was also fined $2 for removing the chair.

On April 16, 1964, the Daily Bruin ran a front-page story describing how residents of the Hill were complaining about being belittled and overpoliced by Residential Life administrators. The students argued the administration was favoring dorm efficiency over treating students well.

“Many residents believe their enthusiasm has been ‘nickel-and-dimed’ away by alleged ‘student intolerance’ on the part of business managers,” then-features editor Bill Christopher wrote.

And nickel-and-dimed the students were.

“‘Why must we be fined $5 for being a minute late on checkout or $2 for removing a screen in order to wash your windows?’ many students ask,” Christopher wrote.

There were more egregious fines than being late and removing window screens, though. The story detailed how several students were suspected of stealing food from the dining halls and how students weren’t given orange juice if they showed up late to the dining halls – presumably when the halls had regimented hours.

One student, Les Leventhal – then a three-year resident of the dorms – spoke of how dining hall personnel suspected his roommate of creating a “contraband stockpile” of hot dog buns because he had received only one bun for two hot dogs and asked for a second bun.

“The argument is not over the inconvenience of receiving only one bun, but over the prevailing attitude that students are to be distrusted,” Leventhal said back in the day.

Another resident spoke of how students weren’t inclined to interact much with their resident assistants – termed “house advisors” back in the day – because of how strict some of the assistants were.

“We’d never discuss anything with (our house advisor) – how can you confide in a man who ‘turned in’ a seventeen-year-old girl for taking a piece of cake out of the cafeteria?” the resident said.

Clearly, the dining halls were fond of keeping hot dog buns and cakes to themselves.

Of course, not all students were fed up with the the dormitory administrators. Peggy Miller, then a two-year resident of Sproul Hall, vouched for UCLA’s dorm system, arguing it allowed students to meet with a diverse array of Bruins.

“I also like the administration, it’s young and liberal,” Miller added.

Perhaps Miller was referring to the student staff working in the dorms at the time. Perhaps she wasn’t.

It’s safe to say, though, that 53 years later UCLA Housing has thoroughly changed its image. Housing’s motto of “Hospitality First” has reached an almost over-the-top level, with Hill residents being pampered with top-notch dining hall food and a variety of events intended to keep student morale high – and stomachs full.

UCLA Dining nowadays also allows students to take a small number of dessert and fruits when they leave the dining halls. Of course, students sometimes sneak out with utensils and kitchenware from the halls, but you don’t see RAs conducting witch-hunts to smoke out these residents.

“Lessening or obviating fines, giving orange juice to a latecomer, or allowing a seventeen-year-old girl to take her cake out of the cafeteria should certainly not cause the dorms to crumble,” Christopher wrote.