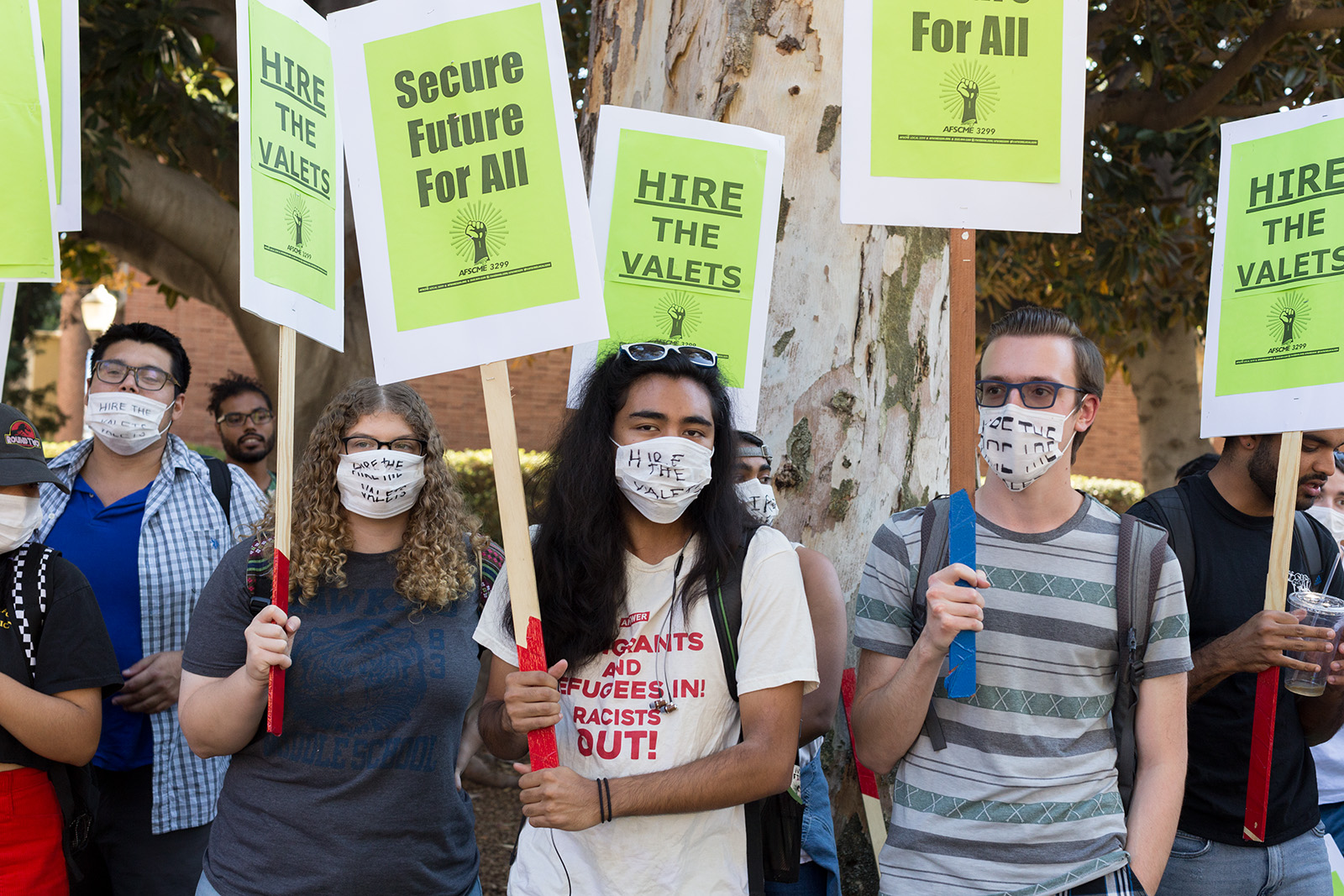 Protestors from the Student Labor Advocacy Project of UCLA and UCLA Sanctuary Campus Committee wore face masks with “hire valets” written on them because they believe some valet workers have developed respiratory issues from breathing in fumes while working in the hospital’s basement. (Marley Maron/Daily Bruin)

By Sharon Zhen and Ryan Leou

About 30 students protested in support of valet workers at the Ronald Reagan UCLA Medical Center on Wednesday and marched to an administrator’s office to deliver a letter asking to meet with him.

Student Labor Advocacy Project of UCLA and UCLA Sanctuary Campus Committee organized the protest to demand the UCLA administration hire valet workers. Protesters wore face masks with “hire valets” written on them because some valet workers have said they developed respiratory issues from working in the hospital’s basement, said Audrie Francis, a fourth-year environmental science student and member of SLAP.

UCLA ended its contract with ABM, a facility management company that employed about 80 valet workers at the Ronald Reagan UCLA Medical Center, in August. UCLA spokesperson Tod Tamberg said in a statement that current employees at ABM were strongly encouraged to apply for these new positions and ABM said it plans to place employees who want to remain with the company at other locations it operates.

He added in a statement the air quality in the hospital’s parking garage is within the California Occupational Safety and Health Administration standards.

After marching to Administrative Vice Chancellor Michael Beck’s office in Murphy Hall, the students then marched through campus chanting “We’re sick of UCLA, hire all the valets” before meeting at Ackerman Union.

Francis said the protesters marched to Beck’s office because he said in a July submission to the Daily Bruin that current ABM employees will not lose their jobs and that the American Federation of State, County and Municipal Employees Local 3299, the UC’s largest union, was perpetuating misinformation about the valet workers.

“He slandered valet workers, making excuses for why their arguments for not hiring the workers are not morally repugnant, saying they can earn poverty wages somewhere else,” they said.

Francis added they think the workers should get the jobs students now hold because they have more experience with the job.

“(UCLA is) trying to replace experienced workers with part-time student workers,” they said. “(We are) marching through campus to raise awareness (among the) student body, because they’re not getting the whole picture.”

Nicole Corona Diaz, undergraduate student government general representative 1, said she attended the protest because she felt angry after hearing about the valet workers’ situation at a town hall organized by SLAP on Tuesday.

“It’s hard to get this type of information unless you’re actively seeking it,” she said.

However, Diaz said she thinks the protest’s turnout was small and said not many people know about the valet workers’ issues.

“What I’m starting to realize (is) it’s incredibly difficult to mobilize students, first of all because they need to know what they’re protesting – no one is going to join unless they know about the cause” she said. “You can’t create an event two days before and expect a huge turnout.”

Francis added SLAP and SCC plan to hold more protests if UCLA does not respond to their requests.

“(UCLA) gets away with things like this when we stop caring,” they said.