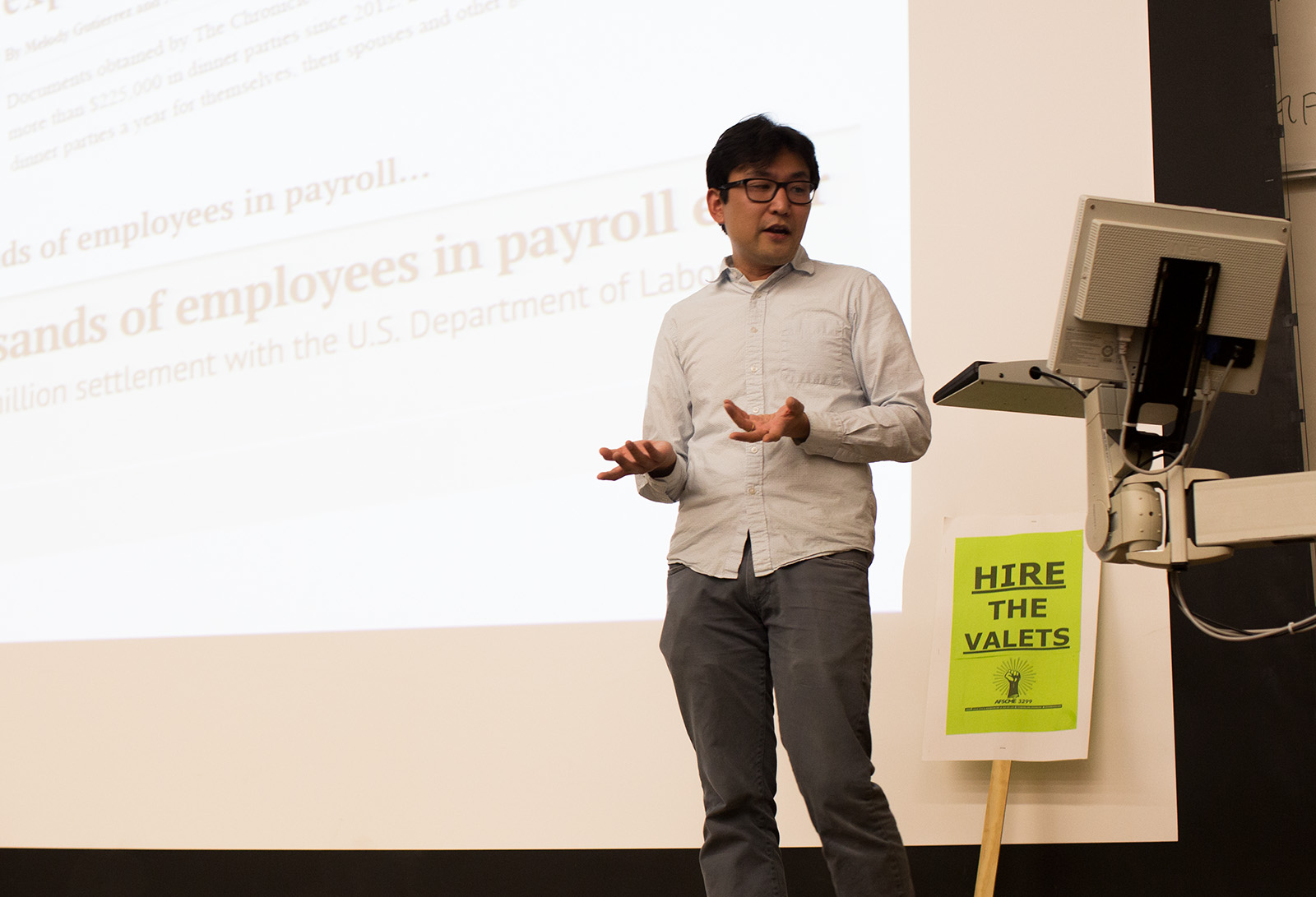 Owen Li, a senior researcher for the American Federation of State, County and Municipal Employees Local 3299, said most of the jobs UCLA is offering to current valet workers are part-time jobs and do not offer enough pay enough to live on. (Marley Maron/Daily Bruin)

Speakers at “Emergency Town-Hall: UCLA to Fire Immigrant Workers,” held by the Student Labor Advocacy Project of UCLA and UCLA Sanctuary Campus Committee, called on the campus to support the valet workers and brought up different University of California labor rights issues.

UCLA ended its contract with ABM, a facility management company that employed valet workers at the Ronald Reagan UCLA Medical Center, in August. Although ABM had employed about 80 valet workers at the hospital, the university created 37 senior parking representative positions and has also hired part-time student workers.

Ahmed Mahire, a contract valet worker at the Ronald Reagan UCLA Medical Center, said at the town hall he often has to send money to his mother back home in Ethiopia.

“I work three jobs. I sleep in the car sometimes,” he said. “(It has been) really hard for me to have family and kids to support.”

He added ABM plans to place employees who want to remain with the company at other locations it operates in.

Victoria Salgado, a union organizer at the American Federation of State, County and Municipal Employees Local 3299, the UC’s largest union, said many workers are concerned for their job security because they received unclear notifications in July and September about their employment dates.

Some of the newly hired student valet workers are not as experienced as the contract workers, said Maged Habib, a contract valet worker at the hospital.

“Some of them don’t even know how to start the cars,” he said.

Edwin Cifuentes, a contract valet worker at the hospital, said he got bronchitis and asthma from breathing in car exhaust fumes after working basement shifts. He added workers have to work longer shifts in the basement because of the transition.

“I got bronchitis and I got better,” he said. “I went to the doctors (again and) they told me I had asthma. I found out I got asthma from the fumes from the cars and the smog.”

Tamberg said in a statement the air quality in the hospital’s parking garage is within the California Occupational Safety and Health Administration standards.

Owen Li, a senior researcher for AFSCME Local 3299, said the UC has been increasing executive pay while cutting benefits for workers.

“The University of California literally wastes billions of dollars on hedge funds, management bloats and on these crazy executive perks,” he said.

The UC has 67 percent more overall staff than in 1993, and the number of senior managers has increased by 327 percent since 1993, Li added.

Li said most of the jobs UCLA is offering to current valet workers are part-time jobs, which he he thinks do not offer enough pay to live on.

Student leaders said they attended the event to demonstrate support for the valet workers and educate students about labor issues.

Nicole Corona Diaz, undergraduate student government general representative one, said she brought her staff to the event to support workers and learn more about their issues.

“I wanted to … be there to support not only UCLA students, but UCLA workers as well,” she said.

Audrie Francis, a fourth-year environmental science student and member of SLAP, said she thinks the event informed students about the valet workers’ situation and encouraged them to get more involved in labor advocacy.

“UCLA direct employees … have a good wage, good benefits and pensions because of labor movements that have fought for these rights,” she said.