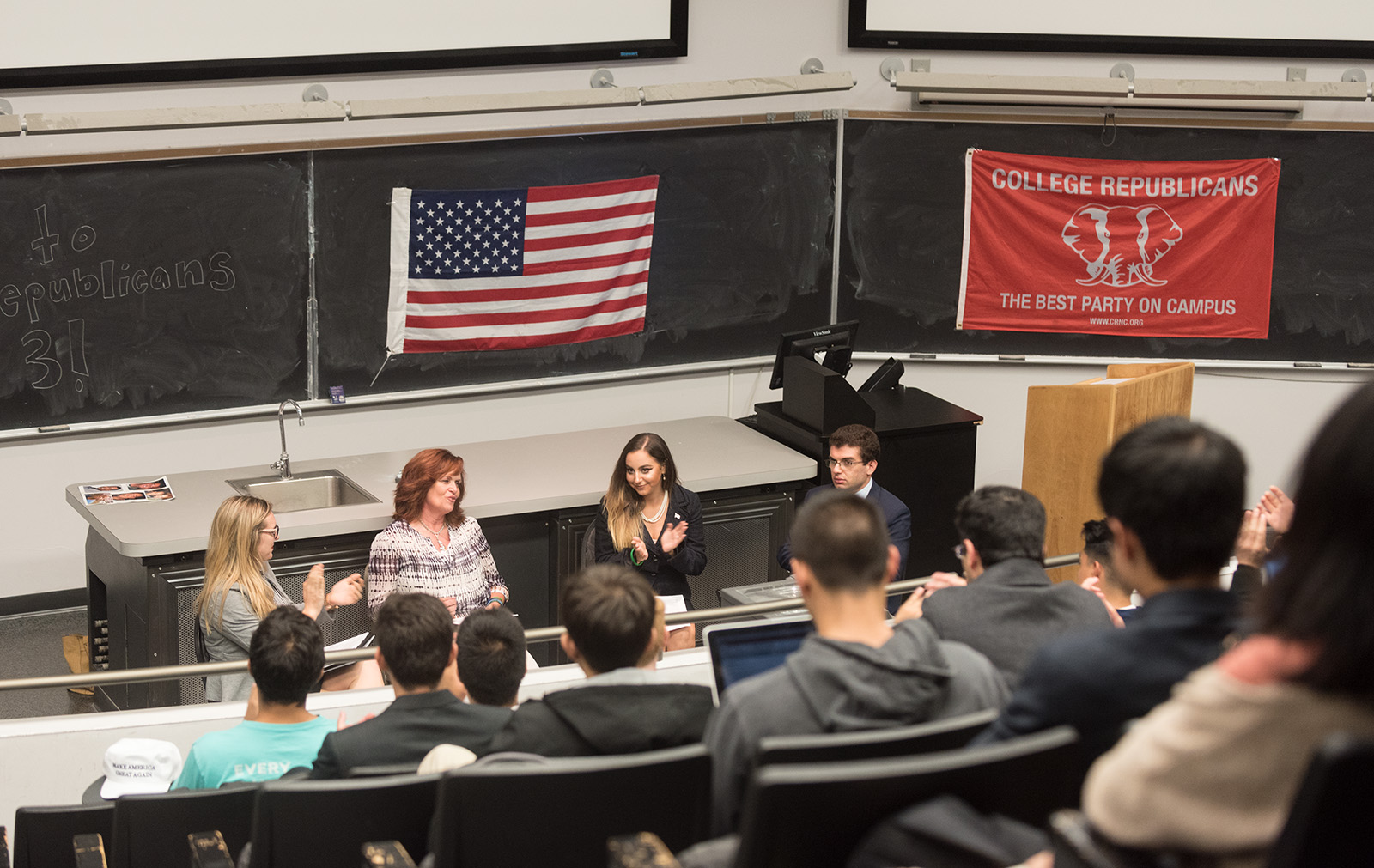 Bruin Republicans has hosted several events in the past featuring conservative speakers.
The group is claiming UCLA is stifling its free speech by imposing additional costs on its Ben Shapiro event in November. (Daily Bruin file photo)

A campus political group is accusing UCLA of suppressing free speech because the university may impose additional security costs for an event the group plans to hold in November.

Tyler Fowlkes, the internal vice president of Bruin Republicans, said the university has told the club it will have to pay the security costs for the event if more than 30 percent of its event’s attendees are not affiliated with UCLA. He added the club’s officers could be responsible for the event’s security costs, which he said could be several thousand dollars.

“We’re being (made) financially responsible for something the university should be paying for,” said Fowlkes, a fourth-year political science student.

UCLA spokesperson Tod Tamberg said UCLA’s policies governing safety expenses for campus events state the university will waive basic security costs for an event if at least 70 percent of its attendees are affiliated with UCLA. If less than 70 percent of the event’s attendees are affiliated with UCLA, the university will bill the cost of the event’s security to the student group holding the event.

However, Tamberg added that even if less than 70 percent of the event’s attendees are affiliated with UCLA, the university will pay all incremental security costs associated with protests that may occur in connection with the event.

Fowlkes said UCLA has not given the club a specific estimate of the event’s security costs, and will only do so the week of the event.

“We are forced into a situation where we have to put our names down financially for an undisclosed amount,” he said.

Tamberg said it is sound safety planning to assess security needs as an event date draws closer, and added UCPD may learn additional information about safety and security risks in the next few weeks.

Jordan Sadlier, president of Bruin Republicans and a fourth-year political science student, said even if 70 percent of the event’s attendees were affiliated with UCLA, the group would still have to pay for crowd control and for a third party to oversee ticket sales.

Fowlkes said he thinks it is unfair for the university to use the ratio of UCLA-affiliated individuals attending the event to make its decision on whether to charge the security costs to the club.

“We’re signing for us to be financially responsible for all security costs if we can’t meet a quota that is used subjectively in its implementation and is completely outside our realm of control,” he said.

Sadlier added he thinks the university arbitrarily enforces the policy and is singling out Bruin Republicans for its conservative views.

“This is viewpoint discrimination – they are enforcing this because of the nature of our event,” Sadlier said.

Shapiro, who graduated from UCLA in 2004, is the editor-in-chief of the Daily Wire, a conservative news and opinion website. He also briefly worked as an opinion columnist for the Daily Bruin when studying at UCLA. When Shapiro gave a speech at UC Berkeley last month, the security costs for the event totaled $600,000, according to the Daily Californian.

“Ben Shapiro’s an alumnus. … He preaches to 700,000 people daily on a radio podcast. Clearly, to those people, he’s not controversial,” Fowlkes said.

Fowlkes said UCLA has funded the security costs for other speakers, like Hillary Clinton, who came to campus in 2014.

“Plenty of other groups have brought speakers to campus that are controversial and deemed as high of a status as Ben Shapiro,” he said.

Tamberg said Clinton’s visit to UCLA was not subject to the same policy as the Bruin Republicans event because her speech was not a student-organized event.

Fowlkes said he thinks the university is violating the club’s First Amendment rights by imposing the security costs and said the U.S. Supreme Court has ruled that speech cannot be financially burdened.

“Free speech shouldn’t be based on viewpoint and a reaction to a hostile mob,” he said.

Sadlier added he thinks UCLA should fund the event’s security costs because UC Berkeley and the University of California funded the security costs for Shapiro’s event last month.

“(UCLA) should follow the free speech mantra of the (UC) and pay the security costs,” he said.