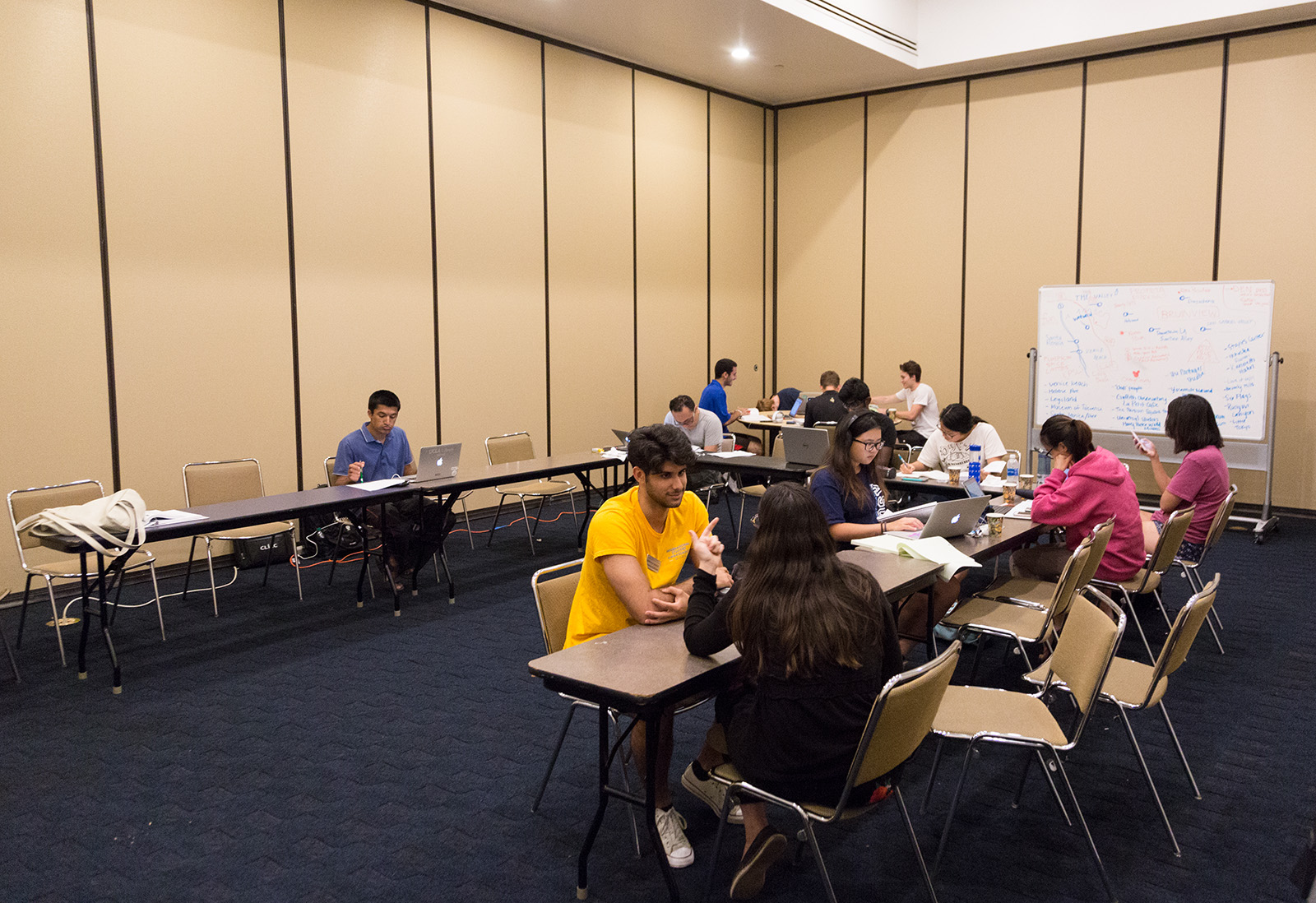 A new study space equipped with snacks, tables and student ambassador office hours opened this quarter at Tom Bradley International Hall. Though the center’s programming is mainly geared towards international students, both international and domestic students are free to use the study hall. (Amy Dixon/Assistant Photo editor)

Students can schedule office hours with student ambassadors, do homework and grab coffee and snacks at a new weekly study hall on campus.

The Dashew Center for International Students and Scholars opened a study space at Tom Bradley International Hall this quarter. The study hall is open from 7 p.m. to 11 p.m. Mondays, and will be open at the same time from Sunday through Thursday on finals week, said Jennie Weingarten, assistant director of programs at the Dashew Center.

“Students have complained that there has been a lack of study spaces on campus,” Weingarten said. “There’s also been a lack of places where international students can hang out and meet each other, so the idea behind the study hall was to (address) both (concerns).”

The new study hall is part of an overall expansion of the center’s International Student Ambassador program, she added. Several ambassadors hold office hours at the hall, where they will be available to answer questions, chat with students and give advice.

The ambassadors are students who represent their home country at cultural events or in cultural groups on campus, and serve as a resource for questions on issues such as academics, study abroad programs or housing, Weingarten said. The ambassadors are unpaid volunteers, and applications are still being accepted on a rolling basis for the countries that do not yet have ambassadors.

She added that while the ambassadors mainly advocate for international students, the events and services they provide are open to all students.

“We would appreciate if domestic students came to our events as well. Then you can look at the U.S. as just another, different culture to international students, ” said Aysan Rangchian, a graduate student in bioengineering and the student ambassador for Iran. “It’s a good exchange of cultures.”

The Dashew Center roughly doubled its budget for the ambassador program this year in order to fund the expansion, Weingarten said. The expansion includes new Skype sessions for students to contact ambassadors during the summer and the formation of six task-oriented subcommittees.

The subcommittees comprise ambassadors who must address a specific concern within the international community, such as professional development and health and financial wellness, Weingarten said.

Yuwan Guo, a third-year chemical engineering student and one of the student ambassadors for China who is in the community outreach, volunteering and social justice committee, said her group hopes to set up a database of volunteering organizations on and off campus, and organize quarterly volunteering events for international students.

Meanwhile, the professional development and networking committee hopes to make career fairs more accessible to international students, such as by inviting more companies that recruit them, said Karmelo Gazzaz, committee member and the student ambassador for Saudi Arabia.

“There are so many internships or jobs that are available only for American students. The resources for international students on campus is so limited.” said Gazzaz, a third-year neuroscience student. “We want to help international students bridge the gap between school and real-world jobs, because often people come here and are only prepared for their education, but not their careers.”

Michala Li, a third-year chemical engineering student who used the study hall Monday, said she had difficulty finding space at first because of the limited seating arrangements, but found it quiet and convenient compared to other study spaces on campus.

“(The Study at) Hedrick is really crowded and loud, and the libraries also close pretty early – sometimes I get kicked out of Powell Library before I even start studying,” she said. “I would use this again. … It’s an extra study space.”