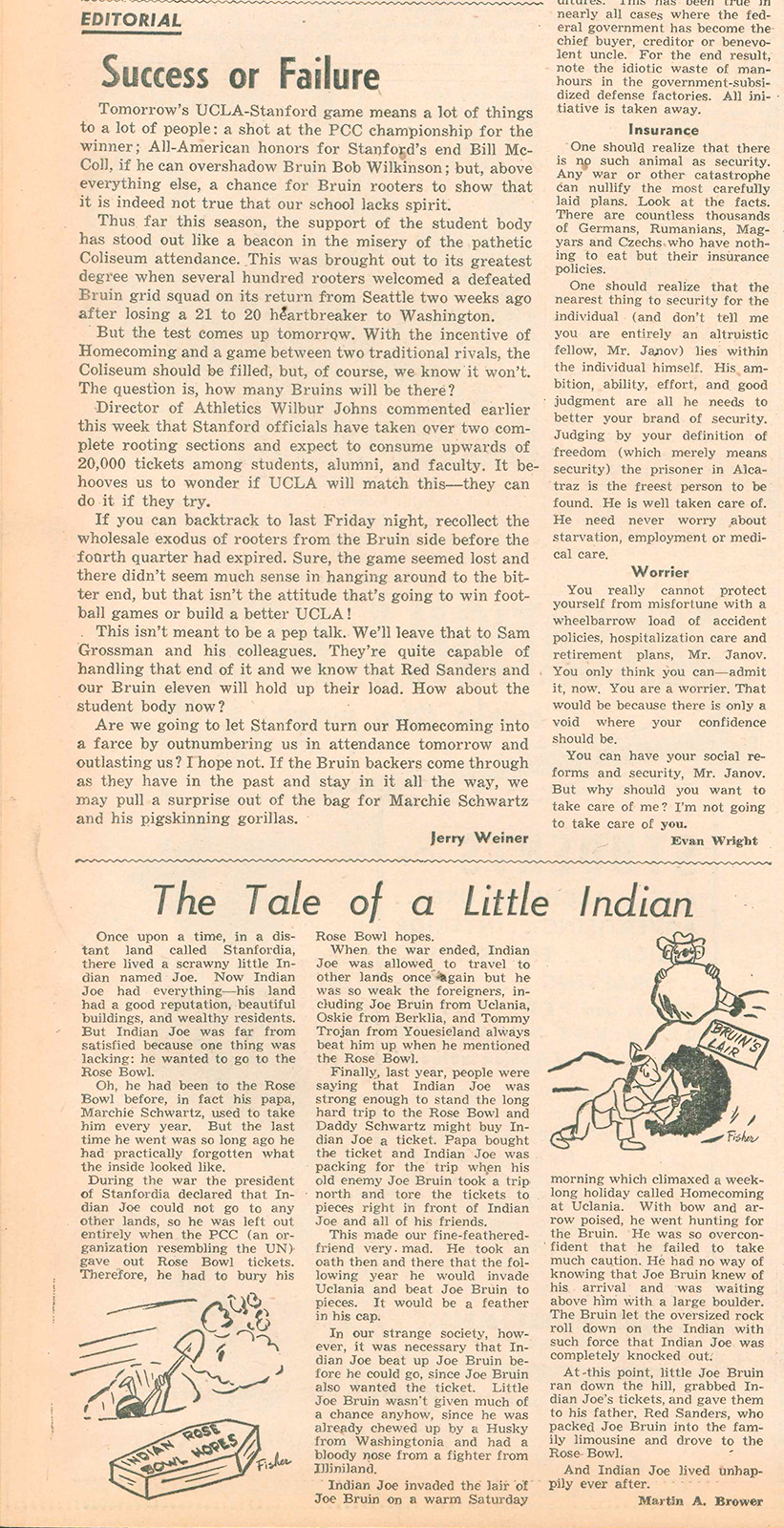 If the Daily Bruin’s Opinion page ever seems to lack that entertaining storytelling you’re looking for, fear not: Our brethren from the 1950s have you covered.

The Daily Bruin Opinion page took it upon itself on Oct. 20, 1950 to extensively cover a big homecoming football game between UCLA and Stanford University. This game, according to the paper’s account, would help decide which of the two teams would compete at the Rose Bowl game, a celebratory postseason football game held at the Rose Bowl stadium in Pasadena. An opinion column written by Martin Brower detailed a satirical – yet distinctively narrative – prediction of UCLA’s ascension to one of the Rose Bowl hot seats.

“Once upon a time, in a distant land called Stanfordia, there lived a scrawny little Indian named Joe,” Brower wrote.

“Now Indian Joe had everything – his land had good reputation, beautiful buildings and wealthy residents,” Brower continued. “But Indian Joe was far from satisfied because one thing was lacking: He wanted to go to the Rose Bowl.”

That’s right: The Daily Bruin Opinion section told the story of the Rose Bowl game by breathing life into university mascots and crafting mythical lands, with the then-Stanford Indians portrayed as “Indian Joe” from “Stanfordia.”

Brower spoke of how during World War II, Stanfordia prevented “Indian Joe” from being able to go to “other lands” – presumably to play away games at other universities – and that it was left out of the Pacific Coast Conference, a body Brower compared to the United Nations. The PCC was the previous name for the Pac-12 Conference.

Brower added that after the war ended, Stanford’s team was susceptible to defeat from “foreigners” such as “Joe Bruin from Uclania, Oskie from Berklia and Tommy Trojan from Youesieland.” He professed that these figures, who represented UCLA, UC Berkeley and USC respectively, regularly beat Stanford. Apparently, the idea that UCLA could beat Stanford wasn’t as big of a pipe dream back in the day.

Stanford’s football team had a resurgence in 1949, Brower argued. But, the column then described how UCLA smashed Stanford’s chance at a Rose Bowl seat.

“This made our fine-feathered friend very mad. He took an oath then and there that the following year he would invade Uclania and beat Joe Bruin to pieces,” Brower wrote. “It would be a feather in his cap.”

The drama only spiked from there.

“In our strange society, however, it was necessary that Indian Joe beat up Joe Bruin before he could go (to the Rose Bowl), since Joe Bruin also wanted the tickets,” he continued.

The column described how “Indian Joe,” with “bow and arrow poised,” went hunting for Joe Bruin, only to have the clever Bruin set a trap for him and have a heavy rock knock Stanford out cold. Humor has changed a great deal in 67 years, so Brower probably meant to say he thought UCLA would pummel – not literally – Stanford in the race for the 1950 Rose Bowl.

This isn’t to say the Oct. 20, 1950 Opinion page didn’t have serious takes to present to the student body. An editorial written by Jerry Weiner, then-Sports editor, spoke of the significance of the UCLA-Stanford game and how Bruins needed to support their football team.

“Thus far this season, the support of the student body has stood out like a beacon in the misery of the pathetic coliseum attendance,” he wrote, referencing the Los Angeles Memorial Coliseum football stadium that UCLA used to play in.

He quickly qualified that statement, though.

“With the incentive of homecoming and a game between two traditional rivals, the Coliseum should be filled, but of course, we know it won’t,” he added.

School spirit was clearly a problem back then. Perhaps that’s why the Opinion page decided to report on sports matters in 1950.

Six decades later, though, the Daily Bruin’s Opinion page tends to keep the sarcastic sports dramatization to a minimum. Aside from being downsized from publishing nearly two pages to only one page, the Opinion section focuses itself on campus, universitywide and state matters and leaves the sports matters to the Sports section.

And outside of Daily Bruin Opinion, California has also changed a great deal in 67 years. UCLA sees record crowd attendance, and school spirit is continually in the stratospheric levels. Stanford changed its mascot to the Cardinal, and has gained the upper hand in the football arena – so much so that UCLA has been defeated by former ”Indian Joe” for the better part of the decade.

But, in an ironic turn of events, it looks like the Daily Bruin is once again graced by an entertaining, tongue-in-cheek narration.