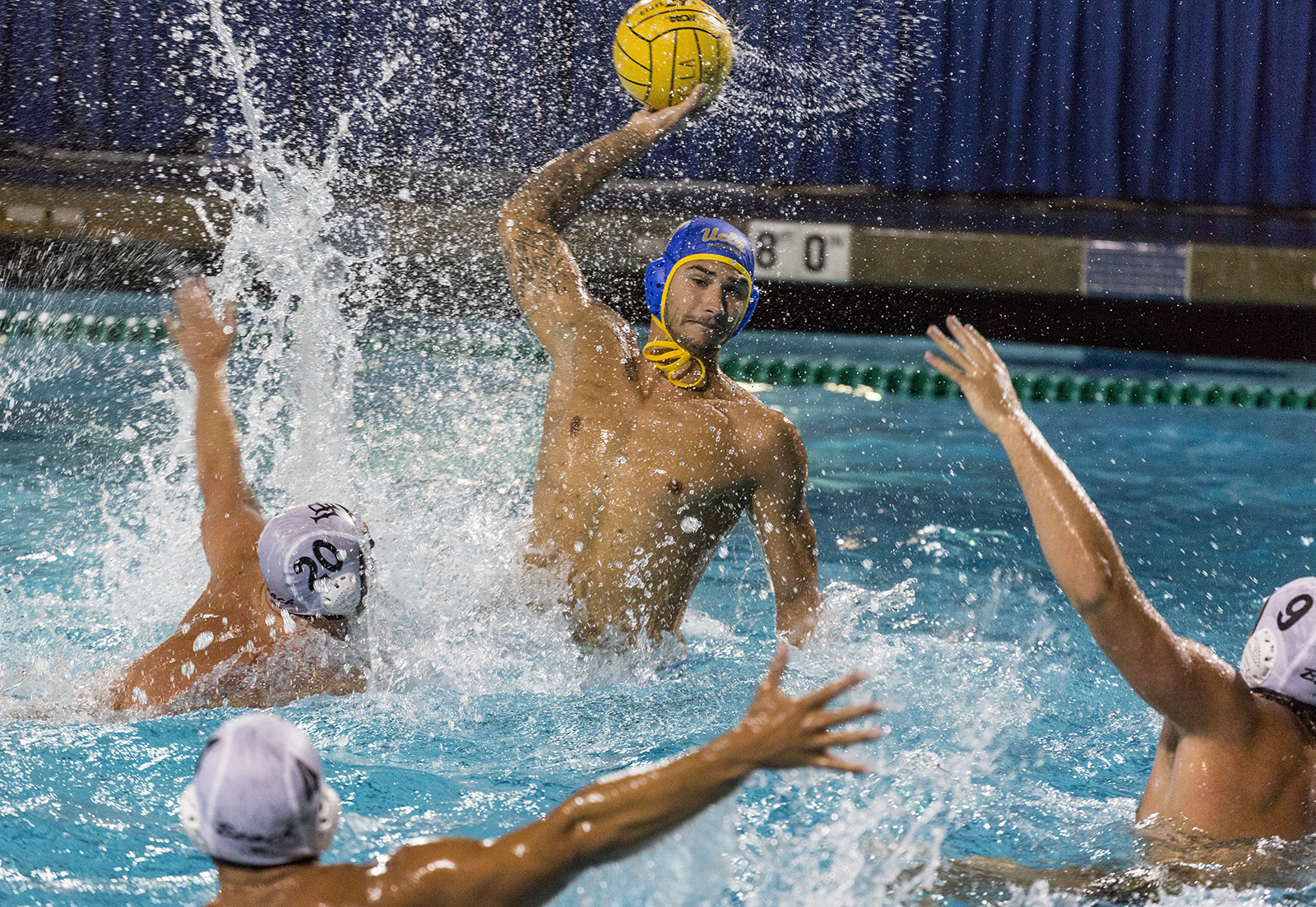 Freshman attacker Nicolas Saveljic recorded the sixth hat-trick of his career against No. 7 Long Beach State on Saturday. The Bruins improved to 15-1 and will play No. 3 California next week. (Kathy Chen/Daily Bruin)

The Bruins picked up a pair of wins over ranked opponents at Spieker Aquatics Center this weekend.

The Bruins began their weekend schedule with a 20-9 win over the Lancers.

“I think they are a good team,” Inoue said. “We knew going into tonight that we couldn’t slack off any bit and that they were going to bring all they had.”

Leading up to the weekend, each of UCLA’s previous five matches had been decided by two goals or fewer.

Against LBSU, the Bruins came out fast. Just 25 seconds in, freshman attacker Nicolas Saveljic scored his 29th goal of the season on a screamer from the left side to open the scoring

A minute and a half later, freshman attacker Chasen Travisano added to the lead, but then things began to slow down.

“We came out great and we were controlling the situation on defense, in transition and on the attack we were getting shots on the goal,” coach Adam Wright said. “And then we let it go all of a sudden.”

UCLA looked out of sync on the offensive end, failing to convert on a handful of 6-on-5 opportunities throughout the night.

The Bruins went fourteen minutes before allowing their first even-strength goal. The streak ended when 49er attacker Austin Stewart got in behind the defense for an easy goal with just two minutes to play in the first half.

Attacker Nemanja Bakic scored another goal for the 49ers within a minute, cutting the deficit to one goal entering halftime.

The second half was very similar to the first.

Saveljic scored the opening goal to give the Bruins a 5-3 lead, and then scored again on the 6-on-5 to complete the hat-trick. He leads the team with 31 goals this season.

Despite the victory, Saveljic said the team is already focused on next week.

“This is a good win for us, but we still need to move forward thinking about our consistency,” said Saveljic. “We have a game next week against Cal that we are already trying to be ready for.”

California is currently ranked third in the nation and is the defending national champion.

Wright said a performance similar to that of Saturday’s won’t be enough to get the job done against the Golden Bears.

“We’ve got a lot of work to do,” Wright said. “They are the defending champions, but they are also so dynamic that if we can’t be present and consistent that whole game, then it’s going to be tough.”