Throwback Thursday: ASUCLA has looked to food outlets to save it from debt for over 20 years 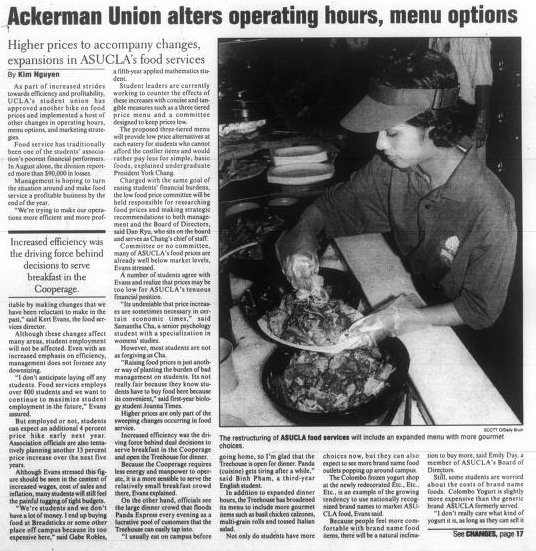 ASUCLA announced last week that it expected to lose more than $1 million this year. Robert Williams, ASUCLA’s executive director, pointed towards increasing labor costs and lower textbook sales as the main reasons for the losses. To improve their budget, ASUCLA is bringing in new restaurant services and planning on expanding e-commerce sales.

This isn’t the first time ASUCLA has looked towards food as a savior for its operations. On October 10, 1995, the Daily Bruin published an article about Ackerman Union changing its operation hours and menu options to boost profits.

ASUCLA’s food services were deep in the red at that point, generating $90,000 in losses in August 1995 alone. But Kurt Evans, then-ASUCLA food services director, said he did not anticipate any layoffs among the association’s over 800-strong student workforce. Instead, the association planned on hiking food prices by four percent in 1996, and considered a 13 percent hike over the next following five years.

Students were naturally unhappy about the hike. One student lamented how the change was unfair because the association knew students had to eat there – even though businesses are not expected to operate on personal sentiment. To counter the hikes, student leaders simultaneously proposed a three-tiered menu that would give students the options to buy “basic” foods for low prices.

Another move ASUCLA felt would help its business was bringing brand names to its food services. One example of this, as pointed out at the time by the Daily Bruin, was replacing the generic brand of yogurt the union was serving with Colombo Yogurt.

Mike Kim, a then-student interviewed by the Daily Bruin, was particularly disgruntled about this. He said he didn’t care what kind of yogurt ASUCLA sold, so long as it was cheap. The amount he was paying extra? All of 10 cents.

Clearly, if you care more about 10 cents instead of the quality of yogurt, you don’t deserve yogurt.

The association also decided to offer breakfast at a restaurant called Cooperage, and serve dinner at an outlet called Treehouse. Shockingly, Evans said there existed even a relatively small crowd for breakfast. Officials felt Treehouse could siphon off the student crowding at Panda Express every evening.

Two decades later and there’s no Treehouse, no Cooperage and no Colombo Yogurt. One of the restaurants mentioned in the article still remains: Panda Express. Panda Express is forever.

ASUCLA’s future plans in 1995 included opening up the Ackerman Union A-Level Cafe and the North Campus Coffee House. The article said the A-Level Cafe was expected to serve coffee and pastries. Evans described the cafe as a place where students could study and read magazines and newspapers.

Twenty-two years later, the A-Level cafe – Bruin Buzz – still serves coffee and pastries, although fast food has a major presence in the area in restaurants such as Carl’s Jr. and Taco Bell. Studying in A-Level is fairly hard because of the sound of the television, and students are more likely to spend time on their laptops rather than reading the Daily Bruin, unfortunately.