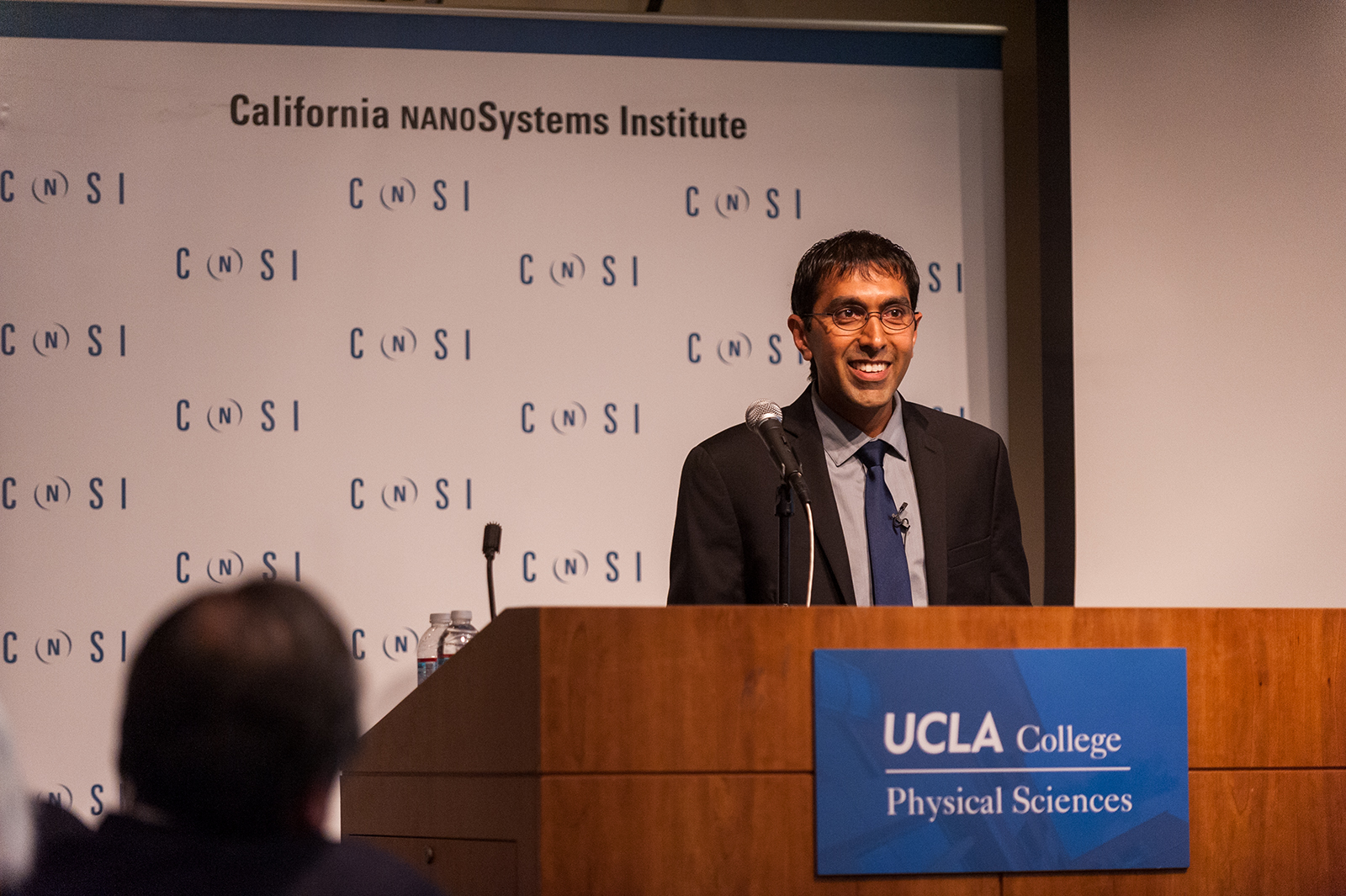 Chemistry professor Neil Garg gave a lecture on how he helped his students enjoy learning organic chemistry and made it a popular course at UCLA. (Mackenzie Coffman/Daily Bruin)

Correction: The original version of this article incorrectly stated finalists for the Cherry Award receive $50,000. In fact, they receive $15,000.

When Neil Garg asked his audience if they heard organic chemistry was the best class they would take, the audience laughed in response.

“It’s a class typically associated with memorization,” Garg said. “Some people say it’s impossible, it’s a weeder class and it will crush your dreams.”

At a free public lecture at the California NanoSystems Institute auditorium Friday, Garg, a chemistry and biochemistry professor, said he encourages student engagement and collaboration to make his organic chemistry class more interesting.

Garg is a finalist for this year’s Robert Foster Cherry Award, which honors professors who have a positive and lasting effect on students. The lecture is part of the award process for finalists.

In his lecture, Garg said he is well-known for teaching Chemistry 14D: “Organic Reactions and Pharmaceuticals,” a popular course at UCLA. On Bruinwalk, a website where users can rate UCLA professors and classes, the course he teaches is rated a 4.6 out of five.

“All the clothing you’re wearing (involved organic chemistry), not only is the fabric organic, but the dye that gives them the colors is as well,” Garg said.

Garg said he removed grading curves in his class because he thinks curves create competition and make students feel uncertain about their grades.

“It lets people relax a little bit, and it fosters collaboration, which is critical when preparing students for the future,” he said.

He added his extra credit assignment, where students create music videos on organic chemistry, encourages students to have fun and be creative with the subject.

“It’s getting people excited enough to go off and start solving these tough problems,” Garg said.

“We’ve had to fight top schools to keep him,” he said. “It’s like in baseball, when you have the star pitcher that every team wants and will do anything to get.”

Students who attended the lecture said they were impressed that Garg was able to make a difficult subject fun in the classroom.

Emily Siegler, a fourth-year biochemistry student who has taken Garg’s class, said she thinks Garg is a brilliant professor and a good faculty mentor.

Jennifer Shintaku, a third-year neuroscience student, said she heard Garg was a fun professor who was able to make a difficult course entertaining.

“I had already taken organic chemistry before I transferred to UCLA,” she said. “ It was one of the hardest classes I’ve ever taken, and I was curious to see how he made the subject fun and creative.”