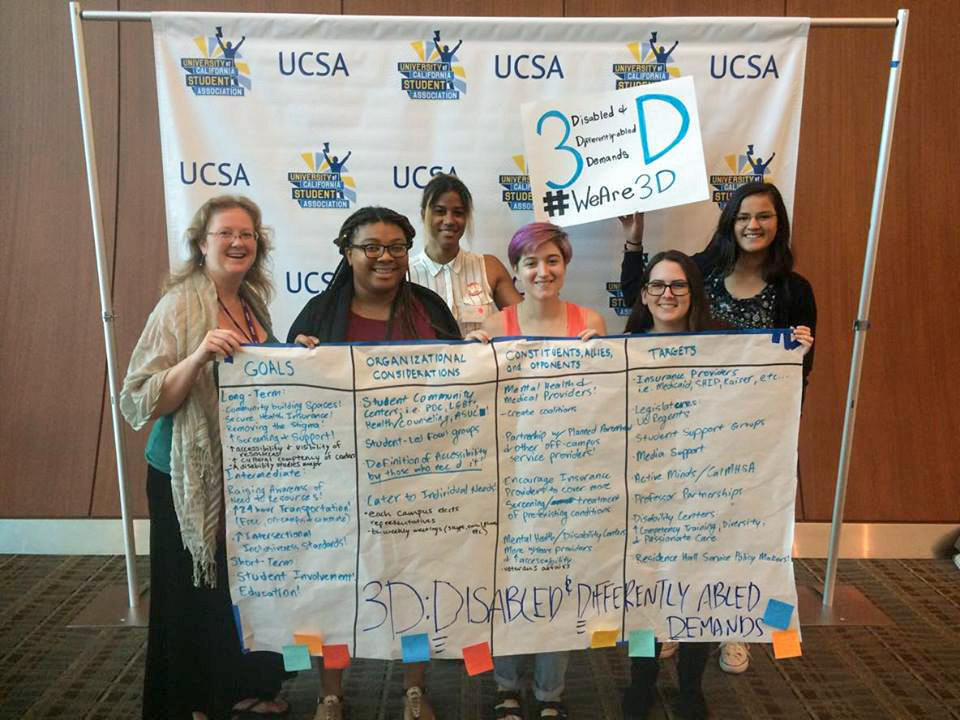 UC student delegates presented a new campaign called #WeAre3D, which was selected as the top choice at this summer’s Student Organizing Summit. Different student leaders will carry out the campaign’s mission at their individual UC campuses. (Courtesy of Cristobal Alberto)

Students across the University of California are working to improve resources for students with disabilities through a new two-year project.

Student delegates voted to pass a campaign called Demanding Disability Resources and Diversification, or #WeAre3D, at the UC Student Association’s UC Student Organizing Summit in September. The campaign aims to bring attention to problems faced by disabled, chronically ill and neurodivergent students, as well as advocate for more and better resources for them.

UCSA is comprised of student governments from various UC campuses and advocates for student-related issues such as affordability and accessibility across the university system.

Each year, the summit’s participants select a campaign to bring to UC campuses. In 2016, they chose to focus on food and housing security and on ending the prison pipeline through Sustain Our Students and ReIGNITE, respectively. This year, student presenters from UC Davis and UC Riverside launched #WeAre3D.

Each campus has assigned #WeAre3D student organizers, who will work on the campaign at their respective schools and try to increase its visibility through social media and on-campus promotions such as posters or events, said Kosi Ogbuli and Christine Tran, UCLA’s campus organizing directors.

The campaign is primarily funded by a UCSA budget allocation. The Undergraduate Students Association Council external vice president’s office will run the campaign at UCLA and will also contribute funding.

Ogbuli and Tran said they are focusing on promoting the campaign and its mission through grassroots advocacy. In the future, they hope to institutionalize the campaign on campus.

One idea they have involves asking the university to guarantee health insurance specifically for disabled students under the UC Student Health Insurance Plan.

“For example, somebody who is disabled is given access to ramps, but not necessarily insured if they do get hurt,” said Ogbuli, a second-year neuroscience and political science student. “The school is not necessarily responsible for that – if something were to happen, the student might not be able to afford the medical cost and would take money out of their own bank account.”

Tran, a second-year international development studies and Asian American studies student, said the campaign will later include legislative advocacy at the state level.

Students who attended the summit as part of the 24-person UCLA delegation said they think the campaign can help more students understand what obstacles disabled students may face.

Eduardo Solis de Luna, a second-year political science and communication studies student and an EVP immigration advocate who attended the summit, said he thinks the campaign can help address the intersection between mental health and disabilities.

“The UC system has kind of ignored that issue (of mental health and disability), but it is important to keep (it) in the spotlight right now so one day it won’t be a taboo subject anymore,” he said. “I feel like with everything going on politically and socially, everyone is affected by mental health right now, and this (campaign) can remind them to take care of their own mental health and be aware of what everyone else is going through.”

Jack Lam, a mental health peer coach who attended the UCSA summit, said some of his friends have disabilities that are invisible to the eye, and thus often have negative experiences on campus. For instance, they might be unable to physically get to class, be more discouraged to go to Counseling and Psychological Services because of long wait times or even have difficulties getting certified by a clinician to get classroom accommodations, he said.

“It’s definitely a really good time for this campaign to be coming out,” said Lam, a fourth-year communication studies student. “If we deepen the understanding of these issues among students and faculty, we’ll create more educational awareness that will influence all the planning and designing on campus in the future.”

Tran and Ogbuli said they hope to work with the UCLA Center for Accessible Education, which facilitates accommodations for students with disabilities, to either increase awareness of its resources or to potentially expand them. They also plan to reach out to students who use resources such as the CAE to ask for their input on which issues should be addressed.

“We also want to reach students who don’t necessarily have a background in USAC,” Tran said. “We’re not speaking on behalf of them, we’re amplifying their own voices.”

The directors have hired a disability justice advocate and are now in the process of assembling a task force composed of students with disabilities or chronic illnesses to help come up with ideas and suggestions.