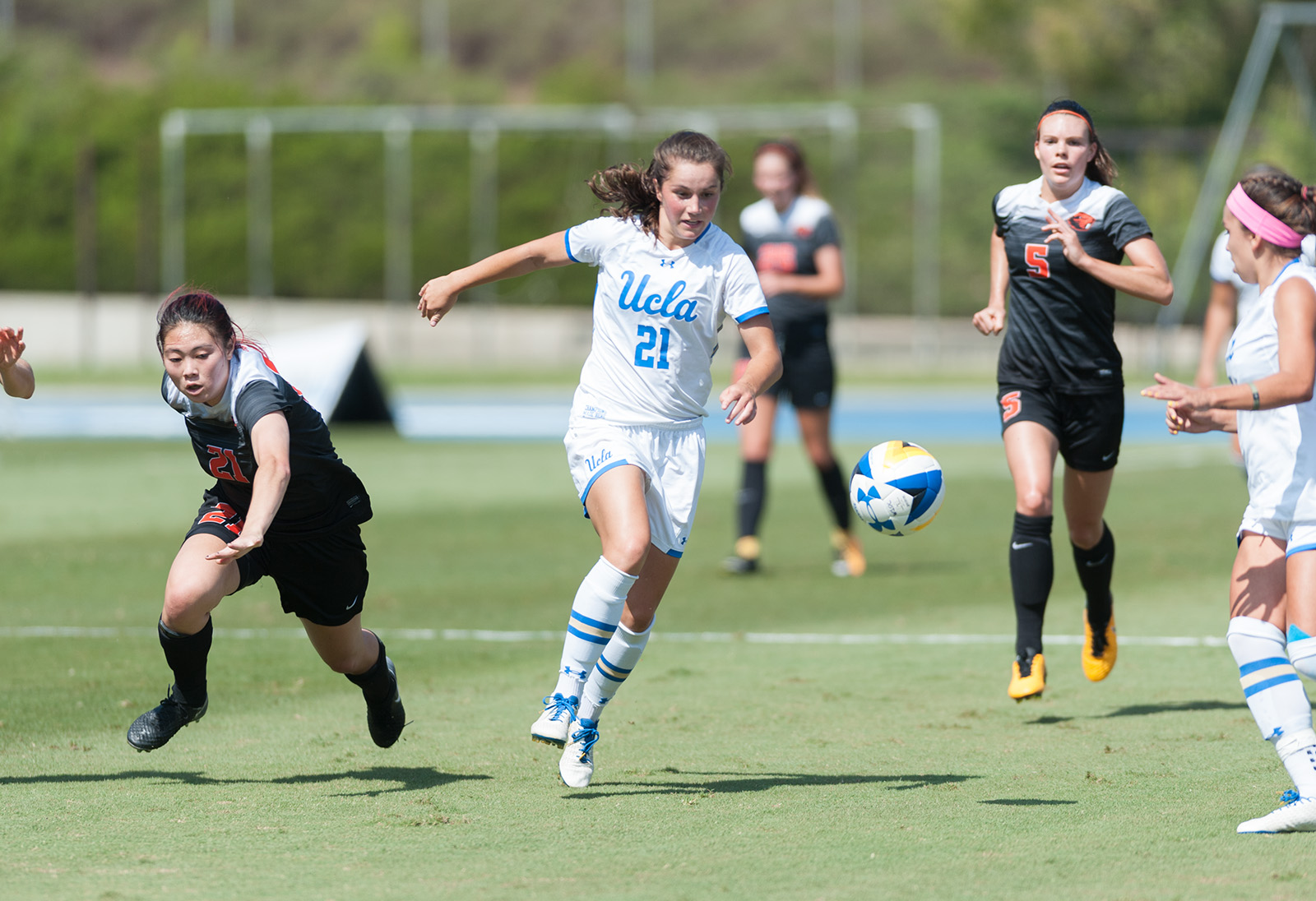 Several issues could potentially arise on the road to the playoffs, however, specifically with the potential of overusing key players.

Coach Amanda Cromwell has been implementing a few strategies to combat this concern, which were apparent in Sunday’s victory over Oregon State.

One of these is resting UCLA’s key assets that are heavily utilized, such as junior Hailie Mace. The forward currently leads the team in goals with nine, and is one of several players to have played over 800 minutes so far this season.

“Giving Jessie Fleming and Hailie Mace (a break was good),” Cromwell said. “In this kind of game, the other team might get frustrated, so we try to protect some players.”

Cromwell took Mace and sophomore Fleming out during Sunday’s second half, except for the last 10 minutes of the game.

Mace played as a center back last year before returning to her natural forward position this season.

“There’s definitely still some kinks to work out but we’re getting more chemistry,” Mace said. “It’s definitely been part of a transition because I was getting used to center back and then going back to forward has been hard.”

Another approach Cromwell used in Sunday’s game was to switch from a 4-3-3 formation to a 3-5-2 lineup. In doing so, the coach eased the load on redshirt senior defender Zoey Goralski and others bearing larger roles.

“I’d like to have given Zoey Goralski more rest, but she was in a three-back so there was less of a load,” Cromwell said.

Redshirt sophomore Anika Rodriguez has also been used heavily this year, with her role expanding into wider coverage as a forward.

Cromwell said that Rodriguez has a really good connection with Ashley Sanchez, Mace and Fleming, which creates a better rhythm on the attack.

“Not only do we have a lot of good players, but players who can also play different positions, including Anika Rodriguez and Jessie Fleming.” said senior wing-back Gabrielle Matulich.

Rodriguez said she played forward before she started her collegiate career, which made it easier to transition into a different role.

“It’s been trying to find that groove again and trying to do things that I did before really well,” Rodriguez said. ” I think this season has been really about putting the team before myself and doing the things that the team needs to be done.”

Cromwell noted that other members of her roster who were decidedly less prepared for the rigors of playing more minutes, and hopes to increase their stamina by giving them more game time.

“We had some players in there that got tired; they hadn’t gotten a lot of minutes,” Cromwell said. “You could tell they started getting fatigued, but that’s what we needed. We needed them to get them fatigued and use this as fitness.”