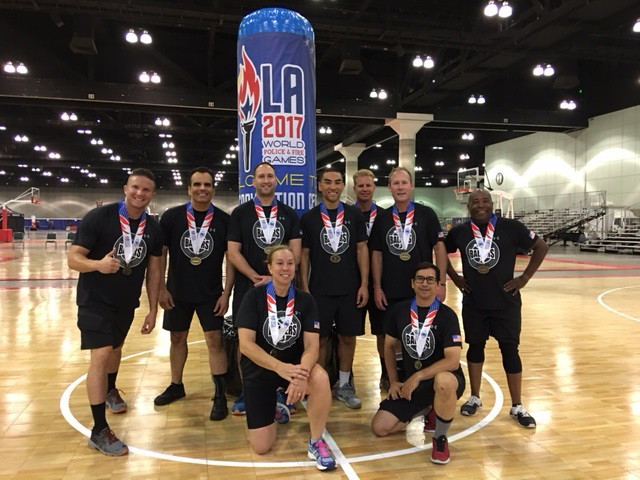 UCPD officer Anthony Hall was one of the 11 UCLA squad members to compete in the 2017 World Police and Fire Games in Los Angeles. He participated in the dodgeball event, for which he won a bronze medal. (Courtesy of Kevin Kilgore)

For just a few weeks during the heart of every other summer, though, a select number of officers change their focus to competing in Olympic-style events.

Every two years, thousands of first responders from across the globe come together to compete at the World Police and Fire Games. This year, Los Angeles hosted the event from Aug. 7 to 16, giving UCPD members the opportunity to compete in their own backyard.

The opportunity to participate in the games was appreciated by Detective Justin Bell.

“It was a really nice break,” Bell said. “I ended up getting nights that week so I competed on Friday morning and I had to go in for a 12-hour shift overnight that night, but it was totally worth it.”

With only a few months to train, many of the officers – such as Bell, who competed in police pistol combat – said they aimed to be competitive while enjoying the experience.

“My goals were to show up, have a good time, not get disqualified and not get last,” Bell said. “Being a totally new experience, I just wanted to go in and have a good time.”

Officer Fabi Leon, who participated in cross country running, said she also wanted to enjoy her time away from work and have fun, but had a few personal goals in mind.

“I definitely wanted to finish in a decent amount of time,” Leon said. “The last time I ran a 5k was in high school. I ran it in like 21 minutes and I knew I wasn’t going to get anywhere near that … so I wanted to do it in under 25, which is what I did.”

Officer Anthony Hall competed in dodgeball, where he ended up winning a bronze medal, the only medal any UCPD officer received at the games.

Despite Hall’s success, he was quick to point out how difficult the event ended up being in comparison to his initial expectations.

“I can definitely say dodgeball became a lot more challenging than I assumed it would be,” Hall said. “I’m sure most people think it’s, ‘throw the ball and don’t get hit,’ but there’s a lot of techniques and strategies.”

Winning is not easily achieved. Top-of-the-line athletes from first responder teams around the world all join up in one location to compete. Success has to be earned.

Dodgeball consisted of 26 teams and more than 300 participants from different countries, but they all shared a common thread.

“That was probably the highlight of it,” Hall said. “Aside from being competitive and wanting to do the best to medal and all that, just seeing all the people that are involved in the first responder team outside of their element, relaxing and having fun was eye-opening.”

Personal goals aside, officers who participated in the games said they were an opportunity to have fun and represent UCPD as a whole.

“Even though we all competed in different competitions we still had one goal in mind, and that was to represent UCLA and UCLA Police Department in a positive light, and I think that is what we accomplished,” said officer Kevin Kilgore.

Moving forward, a trip to San Diego to compete in the annual United States Police and Fire Championships is on everyone’s mind, including Hall’s.

“I’m definitely making my trip to San Diego next year,” Hall said. “I got hooked and hopefully next year I’ll be participating in a few more events.”

Kilgore did not rule out a future trip overseas to compete in the games again because he enjoys being in a different spotlight.

“It is great for us because we represent a university that is known internationally for sports, research and education,” Kilgore said. “You don’t typically get to see police officers get involved.”