Football’s altered defense will need to cover its mediocre offense 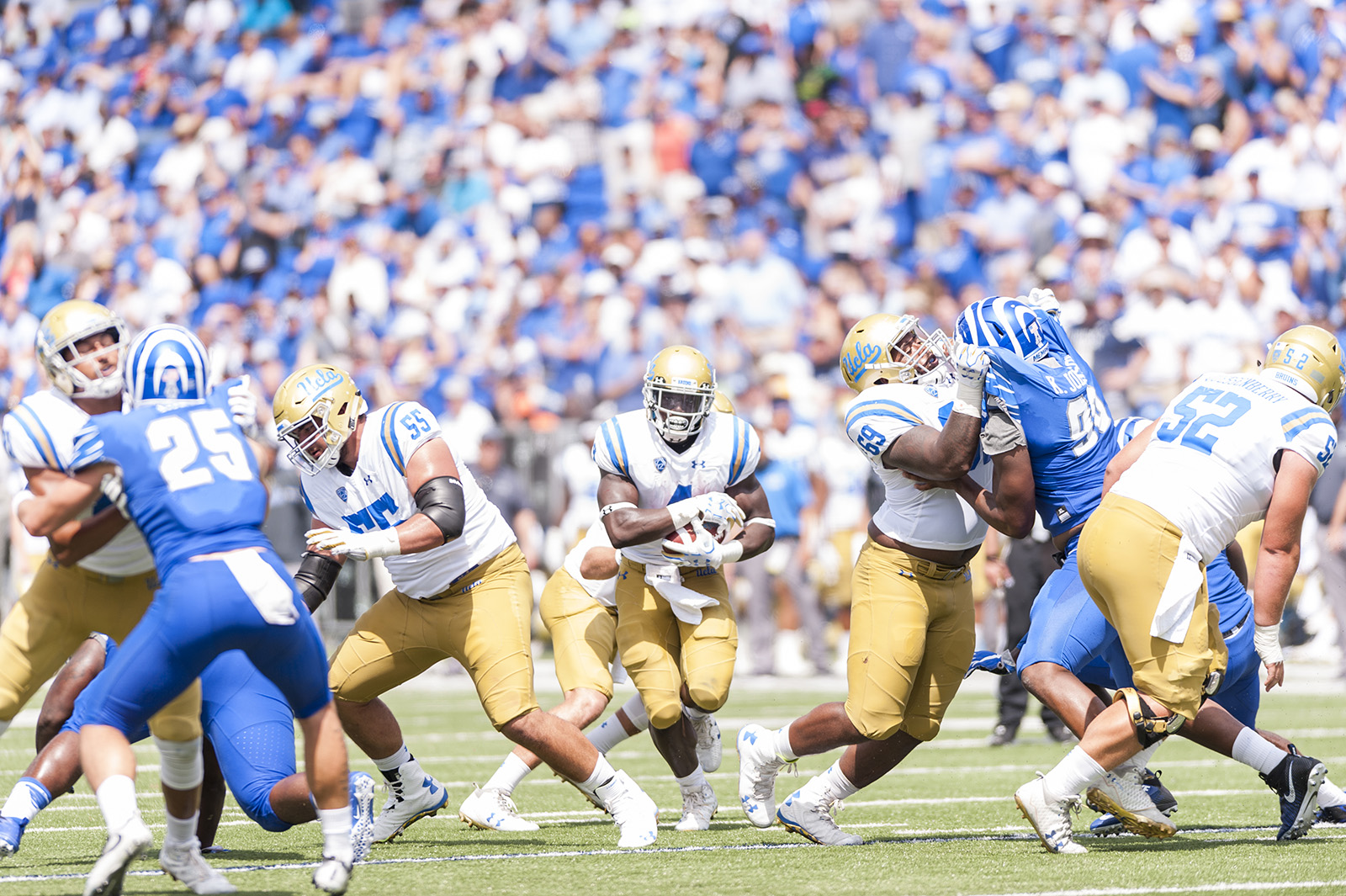 Josh Rosen and the rest of UCLA’s offense will need to up their game Saturday if they hope to get past Stanford, a team UCLA has lost to every year since 2009. (Michael Zshornack/Photo editor)

Josh Rosen is not perfect after all.

The junior quarterback said as much following UCLA football’s first loss of the season Sept. 16, but he’s still leading the country in passing yards and passing touchdowns.

“He’s thrown for 13 touchdowns and two interceptions, so those (interceptions) are (going to) come,” said offensive coordinator Jedd Fisch. “I haven’t seen a perfect season yet. … (But he’s) someone that I’m hoping we have the opportunity to coach for another 19 games or so.”

Coincidentally, 19 games ago was the last time a UCLA running back recorded a 100-yard day. That’s just one of several ominous streaks clouding over the Bruins (2-1) when they visit the Stanford Cardinal (1-2, 0-1 Pac-12) on Saturday night in a battle between two teams freshly dropped from the Associated Press rankings.

UCLA, which has lost to Stanford in nine consecutive games, averages 121.7 rushing yards per game and 4.2 yards per rush. Both figures rank in the Pac-12’s bottom four, but Fisch said that considering the past two weeks, the latter figure is not an overwhelming cause for concern.

On the other hand, the Bruins have allowed four 100-yard rushers so far this season, and they will face another explosive running back in the Cardinal’s Bryce Love. Love ranks second in the country with 174.7 running yards per game and first with 12.19 yards per rush.

Another challenge will be Stanford’s three tight end sets, something UCLA has not seen much of, if at all, this season.

“With all the tight ends, it does create different sets of problems, especially for your linebackers,” said defensive coordinator Tom Bradley. “We had a lot of guys playing in different positions. … This is an opportunity for them to grow.”

Having numerous first-time defensive starters means experience will be in play for the relatively young Bruins against the Cardinal, who return 26 players who started a game last season and 25 fifth- and fourth-year seniors.

Freshman defensive lineman Jaelan Phillips could miss the game with a right leg injury he suffered against Memphis, so redshirt sophomore Keisean Lucier-South could be in line to start.

And if senior linebacker Kenny Young remains out with a head injury he suffered against Hawai’i, the rest of UCLA’s starting linebacker corps will have only 11 combined starts.

The rotating door in the Bruins’ seven-man defensive front will also impact their ability to pressure Cardinal quarterback Keller Chryst. In Stanford’s loss to San Diego State, Chryst was only 9-20 for 72 yards and two interceptions, while also taking four sacks and losing a fumble.

“The problem is when you’re mixing and matching guys you have to judge what they can and cannot execute,” said coach Jim Mora. “I’d like to see more production out of our edge rushers. … We have decent numbers, but I think on a consistent basis being able to move the quarterback off his spot is what you want to be able to do.”