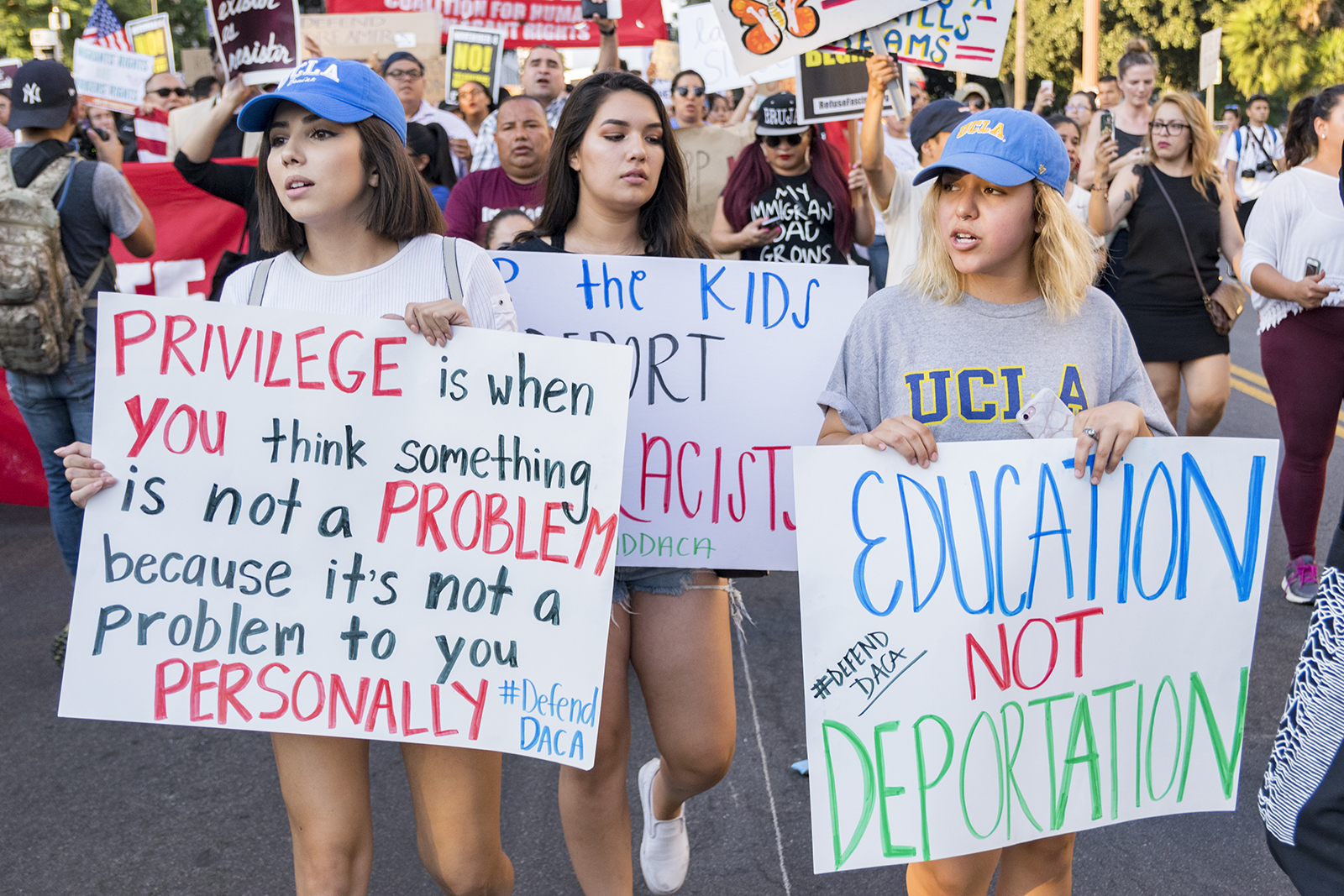 UCLA students have protested in support of undocumented students after the election of Donald Trump as president. (Michael Zshornack/Photo editor)

When Mishelle Oh wanted to join her high school basketball team, the family she lived with urged her not to play.

Because Oh was undocumented, she could not get health insurance and would have had to pay to treat injuries out of pocket.

Oh, a 2017 UCLA alumna, said when she enrolled in the Deferred Action for Childhood Arrivals Program, her life improved significantly through access to better work options and financial resources.

On Tuesday, President Donald Trump announced he will end DACA, a program created in 2012 by former President Barack Obama that delayed the deportation of undocumented immigrants brought to the United States as children. The decision has left many undocumented UCLA students and alumni feeling betrayed by their government.

DACA allows undocumented immigrants who arrived as children and do not have a serious criminal history to work legally and defer deportation for up to two years. DACA protects nearly 800,000 undocumented individuals in the U.S., and about 4,000 students at the University of California.

Hiroshi Motomura, an immigration law professor at the UCLA School of Law, said he takes issue with the Trump administration’s reasoning that the creation of DACA violated the separation of powers between the executive and legislative branches.

“I think the idea that (DACA) is making law misunderstands its purpose,” he said. “Rather, it regularizes the discretion with how immigration law is administered.”

In 2011, the Department of Homeland Security issued guidelines on which undocumented immigrants to prioritize for deportation, but some Immigration and Customs Enforcement field offices ignored them, Motomura said. Obama created DACA to make enforcement of immigration law more transparent and to try and mitigate instances of racial profiling, he added.

“DACA takes priority from (ICE officers) and puts power into a system that has requirements, a form and a fee,” Motomura said.

Oh said before DACA existed, she had difficulty paying for higher education because she lived in the US with only her brother and a host family.

“When I was left financially independent at age 17, I started working and getting paid under the table,” Oh said. “But I experienced wage theft – I didn’t have a choice because I had to pay for things like rent and books out of pocket.”

Oh said because she worked while undocumented, employment protection policies, such as overtime pay regulations, did not apply to her. She regularly worked until after midnight but felt she could not tell anyone about her situation.

She added her life changed after she received a DACA work permit because she could work at a job with adequate pay, qualify for financial aid, receive a driver’s license and even study abroad.

However, Oh said she is frustrated the Trump administration will end the program because she thinks by doing so, the U.S. government would deport many skilled workers that employers need to help the economy grow.

Ricardo Ayvar, a UCLA alumnus and DACA recipient, said he was initially hesitant to apply for the program when it was first created for financial reasons and because he was afraid of giving the government his name and information.

Ayvar added he has kept a close eye on the Trump administration’s stance on DACA for the past few months.

“(The announcement) was something I was bracing myself for, but I wasn’t holding my breath,” he said. “I hoped for the best that something would happen before then (to preserve DACA), but I planned for the worst.”

He also said he has explored different options for when his DACA work permit expires in a year, such as graduate programs in Canada or Europe, and is looking into whether he qualifies for other visa programs.

“I haven’t (interviewed with a lawyer), so I don’t know if I would qualify or what the process would be,” Ayvar said. “I’m exploring all my options.”

Scott Kang, a rising fourth-year mechanical engineering student who recently renewed his DACA work authorization, said he does not understand why the Trump administration would disrupt the livelihoods of people who are working, contributing to society and paying taxes.

“I just want to know why he has to ruin lives of 800,000 people to (make a political statement about immigration),” Kang said. “I see where he’s coming from, with his view on immigration, but the steps he’s taking aren’t moral.”

Kang added when talking to a friend who is also undocumented, he felt like a criminal trying to stay out of trouble.

“Literally the things I was saying to my friend, like ‘stay safe’ and ‘be careful not to get caught,’ it’s what criminals say,” he said.

DACA recipients can still renew their work permits by Oct. 5 if they expire on or before March 5, 2018. Renewed authorizations are then valid for another two years.

Kang said even though he recently renewed his work permit, when he heard that DACA recipients do not have guaranteed protection against Immigration and Customs Enforcement officers, he felt unsettled.

“Two years go by so quickly,” he added. “With a Republican Congress, (Trump is) basically saying we’re going to get rid of (DACA). I’m a pessimistic guy by nature, and I can’t see the silver lining in this.”