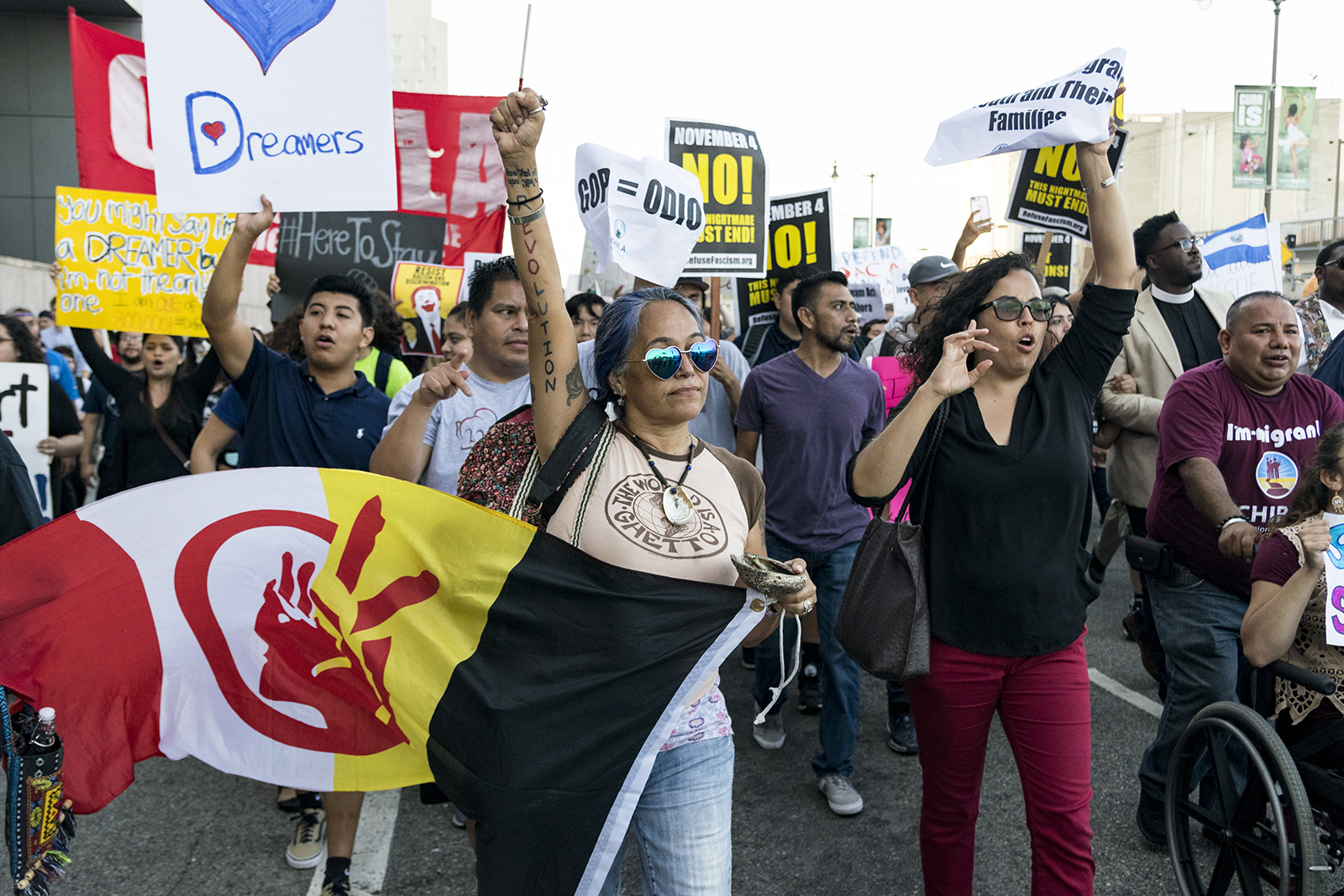 UCLA students joined thousands of demonstrators gathered in downtown Los Angeles on Tuesday after President Donald Trump’s administration announced it will end a program that deferred the deportation of hundreds of thousands of undocumented individuals brought to the United States as children.

The event began at about 5 p.m. as community members congregated at La Placita Olvera in downtown Los Angeles, equipped with handmade signs with messages such as “Defiende a los Jóvenes Migrantes Y sus Familias,” “Unite Now” and “Mi existir es resistir.” The crowd immediately broke out into chants in Spanish and English – “El pueblo unido jamás será vencido,” followed by, “The people united will never be divided.”

The rally protesting the announcement of DACA’s termination was co-hosted by organizations including the Coalition for Humane Immigrant Rights of Los Angeles, California Dream Network and UndocuMedia, a non-profit co-founded by 2015 UCLA alumnus and immigrant rights activist Justino Mora.

Mora said the approximately 800,000 DACA recipients, including himself, had come forward several years ago trusting the Obama administration with their information, and are now being threatened to have their protections taken away. He added he hopes DACA recipients will feel assured after Tuesday’s protests that there are allies who stand in solidarity with the undocumented community.

Activists have shown support for DACA in marches and demonstrations across the country. Dozens were arrested at Trump Tower in New York on Tuesday at a protest against the decision to end the program, and others gathered in front of the White House as Sessions made the official announcement.

Docnary Reyes, a DACA recipient who will be attending UC Davis this fall quarter as a transfer student from Pasadena City College, joined the crowd wearing a black graduation cap with the words “Davis Bound” written in green marker. She said she felt empowered by joining the demonstration, but had felt a mix of anger, sadness and stress following the morning announcement.

“I’m just transferring, and it makes me feel like I took a step forward and now I’m taking two steps back,” Reyes said.

“I just started crying. I didn’t think it would happen, obviously,” De La Cruz-Cabrera said. “But this is the reality.”

But other student demonstrators and DACA recipients said the news came as less of a surprise.

Third-year geography student Gustavo Garay-Ramirez said he expected the Trump administration to end DACA, given the president’s longtime promises to push for changes to immigration laws.

Garay-Ramirez, who was 6 years old when his family came to the United States from Mexico, said he will lose the feeling of safety that he and his family will not be deported if Congress follows the president’s lead and upholds the end of DACA.

Fabiola Cuevas-Flores, a third-year psychology student, said she is frustrated that the decision to end DACA affects many individuals who did not decide to come to the United States. She said her parents immigrated from Morelos, Mexico when she was 6 months old.

“I literally have no recollection of my time in Mexico,” she said.

Cuevas-Flores said she wants to become a social worker and pursue a doctoral degree in social work or clinical psychology after finishing her undergraduate years at UCLA, but feels uncertain about her future without DACA.

“I put myself through all these years of schooling and all this hard work, but what am I going to be able to do with it now?” Cuevas-Flores said. “I’ve been here almost 20 years of my life and I’ve worked so hard to do all these things.”

Mora said he thinks that regardless of Congress’s decision, DACA recipients will continue to have a community with each other and with their allies.

“We call it in Spanish the whole pueblo, a town, behind every single undocumented person,” Mora said. “With or without DACA, we’re here to fight, and we’re here to stay.”