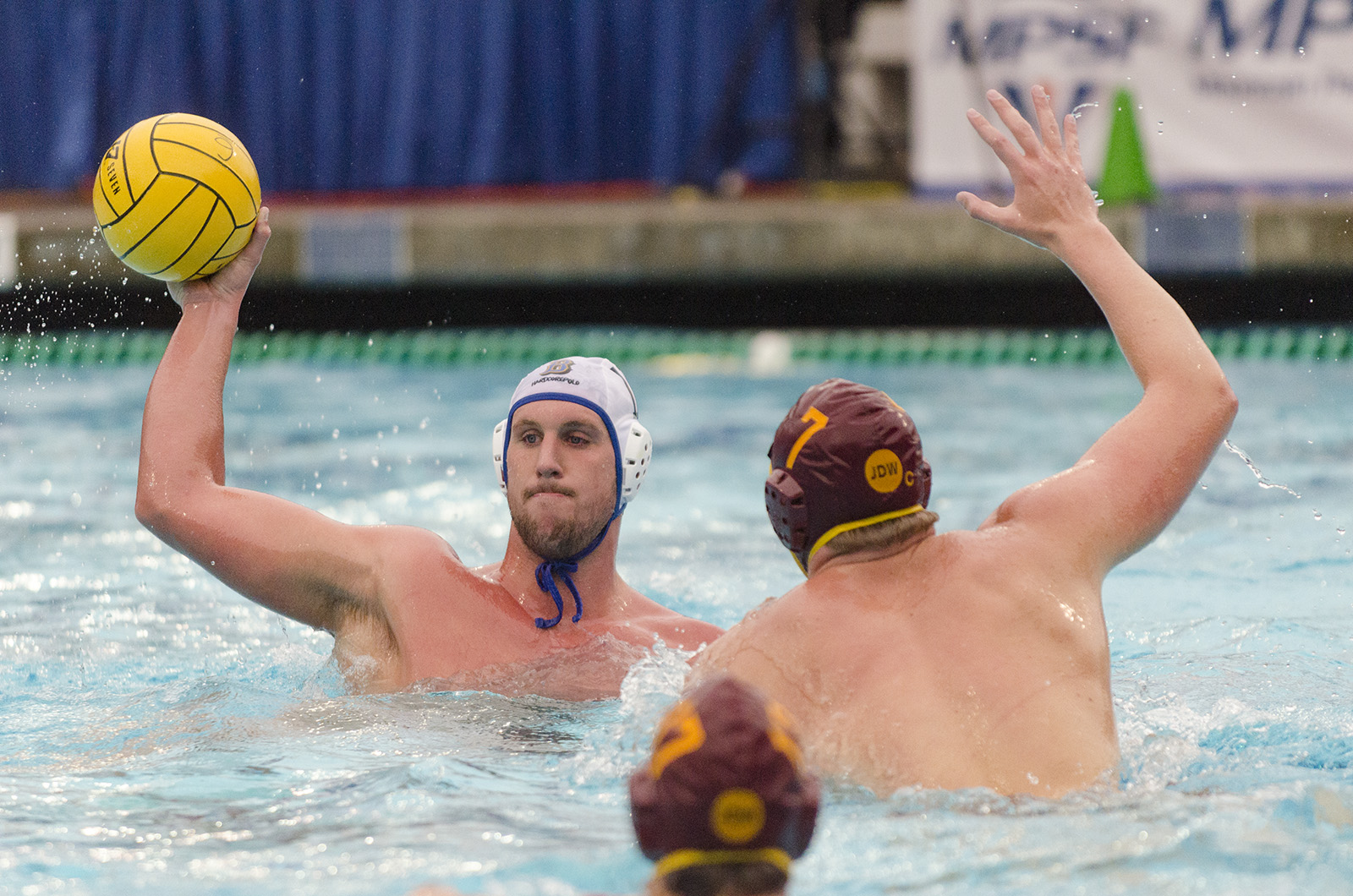 UCLA men’s water polo opened its season Saturday, scoring a whopping 35 goals against two opponents who only managed seven, but coach Adam Wright said that the team has much to improve upon.

“For the first two games, everybody got a lot of of experience. It’s good to see different combinations,” Wright said. “Also, we got to see that we have a lot of work. We can’t be a team that’s not using our brains. … For us, the best thing we’ll take from this weekend is video, and hope we can learn from our mistakes.”

The No. 4 Bruins (2-0) notched a 16-5 win over the No. 18 Pomona-Pitzer Sagehens and a 19-2 win over the Claremont-Mudd-Scripps Stags at the UCLA Invitational this weekend, followed by an exhibition match against the No. 2 USC Trojans.

Freshman center Quinten Osborne led UCLA in scoring with a hat trick against the Pomona-Pitzer. The Sagehens scored the first goal of the game, but their success ended quickly. The Bruins would earn the next nine goals for a comfortable 9-1 lead.

“I thought our centers, (freshman) Felix (Brozyna-Vilim)and Quinten, did a great job. (Freshman utility) Evan Rosenfeld was great at defending,” Wright said, giving his younger players credit. “That’s their first time playing in a game like this and for the most part, they did a really good job.”

Thirteen different UCLA players found the back of the cage against Pomona-Pitzer, and the Bruins posted an even larger victory over Claremont-Mudd-Scripps, scoring eight consecutive goals on the way to a decisive win.

Another freshman led the team in scoring against the Stags, as Nicolas Saveljic notched a hat trick of his own in the afternoon.

“The talent is certainly there and if we buy into what Adam teaches us every single day, I think we can really achieve a lot of things this year,” said senior utility Alex Roelse. “I think we’ve certainly made progress in the basic things that are statements for UCLA water polo – that is, the grit, the consistency, doing the small things the right way – we’ve definitely made a lot of improvement in those.”

Following their exhibition match with the Trojans, Roelse said their rivals have a very physical team, which was to be expected. USC boasts a total of eight All-Americans along with Cutino Award-winning goalkeeper McQuin Baron, and returns its top five scorers from last season.

“There is still a lot of improvement to be made, you can see the mental lapses once we get a little tired,” Roelse said. “The simple mistakes are sometimes detrimental, and I think you could really see that today (against USC).”

Wright said his players would sometimes shoot the ball prematurely, which gave their opponents too many counterattack opportunities.

“We can’t do that, we can’t afford that,” Wright said. “They’re too good of a team for us to make decisions like that. So if we make change and keep progressing, we can play. But if we play like that, we’re in trouble.”

UCLA will largely have to depend on its younger players this season after losing nine seniors, five of whom were All-Americans.

The challenge is that its main competitors did not experience the same vacuum of talent. California, USC and Stanford outrank UCLA this season because of the significant depth on their rosters.

“For me, it was awesome playing at a totally new level with a totally different group of guys who are super inclusive and accepting of the new freshmen,” Rosenfeld said.

Rosenfeld also said the team needed to work on playing smarter and being more under control.

“I think there were times where we shot too early. (Other teams) can capitalize on that, and then counter on us,” Rosenfeld said. “So I think we need to slow down sometimes and take a couple deep breaths, and play a little slower and a little smarter.”

UCLA heads to the Princeton Invitational next, and will face George Washington for its first game Friday.