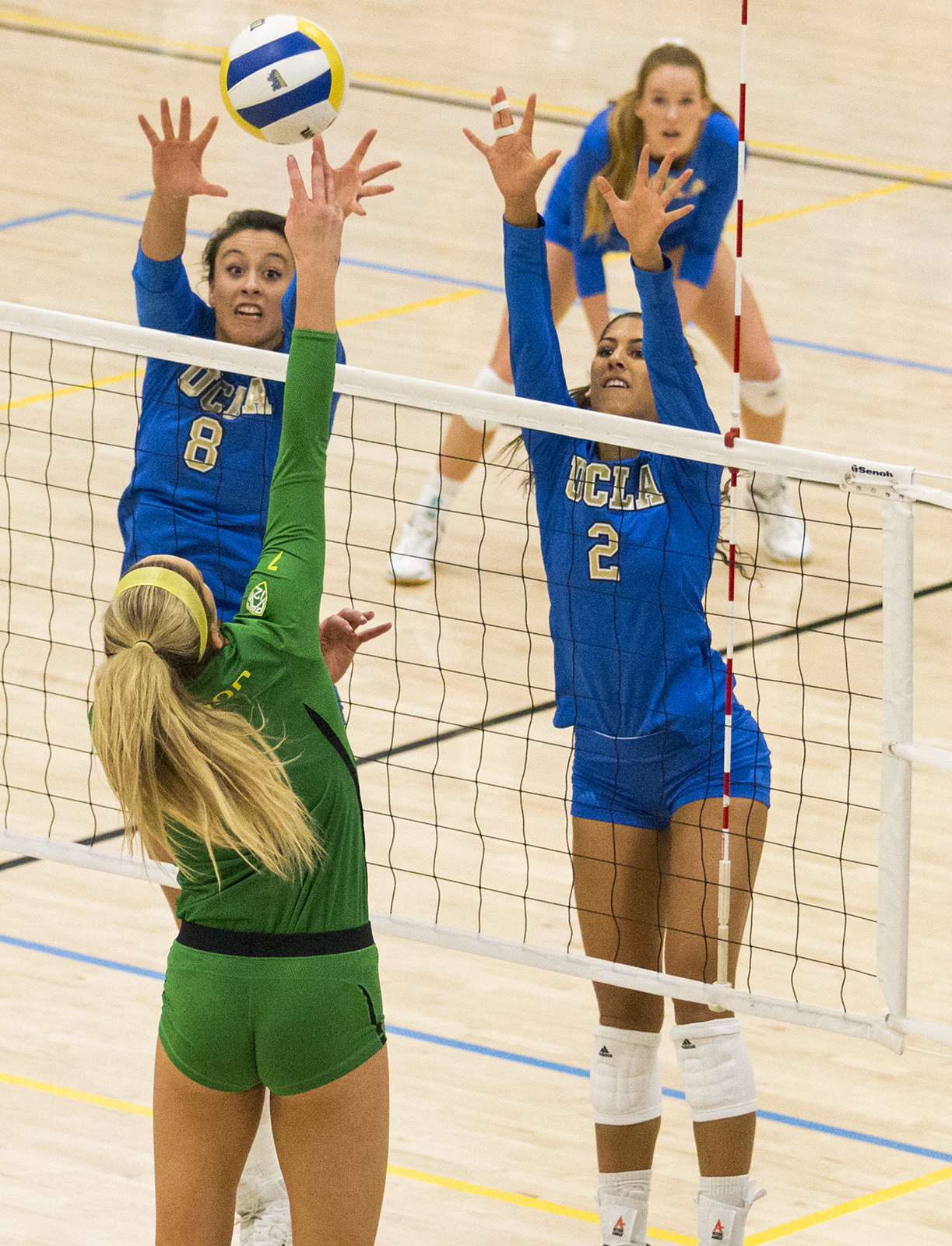 After spending her first two years at UCLA as a utility player, junior Kyra Rogers has returned to the middle. (Stella Huang/Daily Bruin)

UCLA women’s volleyball opened its season with matches against three teams that made the NCAA tournament last year.

Freshman pin hitter Mac May made her mark in her collegiate debut with 43 kills over the course of the weekend – 10 more than any other UCLA player.

Five Bruin hitters reached double-digit kills in at least one game of the weekend, highlighting the team’s depth.

“This weekend showed that they don’t all have to play great every night,” said head coach Michael Sealy. “Sometimes two people are going to carry us and then the next night it’ll be two different people.”

The libero position was the most in question going into the weekend, as Sealy said before that it was still between junior Zana Muno and sophomore Savvy Simo. Muno took most of the time as libero this weekend, while Simo was used primarily as a defensive specialist. Sealy said that for the time being, that is what fans can expect to see.

“Middle has been her natural position, that’s what she always played growing up,” Sealy said. “Because she’s talented in a bunch of different ways she’s been a utility for us in previous years, so for her it’s just getting back to the position she’s used to.”

Rogers recorded 25 kills from the middle and 13 blocks, second to only sophomore middle Madeleine Gates.

San Diego handed UCLA its first loss of the season last year after a 7-0 start.

This year, the Bruins swept the Toreros in their season opener Friday for their 19th straight season-opening win.

After losing the first three points of set two, UCLA went on a nine-point run and then proceeded to extend the lead to double digits at 16-6. The Bruins took the set 25-12.

The third set was by far the closest of the three. UCLA tied with San Diego six times throughout the set and overcame a five-point deficit to take the set, and the match, 25-22.

Senior pin hitter Reily Buechler led the team with 13 kills and seven digs while Gates led in blocking with two solo and eight block assists. The Bruins had 16 blocks in total, more than in any match last season.

Senior setter Sarah Sponcil and May both made major contributions in their first match as Bruins. Sponcil recorded 30 assists, six digs and 2.5 blocks while May tallied eight kills, six digs and two blocks.

May led the way for UCLA’s win over Marquette on Saturday in what was just her second ever collegiate match.

The freshman pin hitter tallied 17 kills, including six in the fourth and final set.

Both seniors, Buechler and Sponcil, recorded double-doubles in the win. Sponcil had 48 assists and 14 digs, while Buechler tallied 11 kills and 12 digs.

The opening set was close for the first half, but then the Bruins blew it open after a 6-1 run put them up 21-14. UCLA then gave up only two more points to take the set 25-16.

The Bruins gained the lead at 6-5 in the second and did not relinquish it for the remainder of the set and won 25-20.

The Golden Eagles took control of the third set at 4-3 and the Bruins never led again. Although Marquette never led by more than five, UCLA was unable to overcome the deficit and fell 25-20 to force a fourth set. The Bruins were outhit .364 to .278 after outhitting the Golden Eagles in the first two sets.

UCLA took an early 6-1 lead in the fourth set, but Marquette rebounded and built a 19-13 lead that was made easier by the Bruins’ eight hitting errors in the set.

Serving runs by May and Buechler brought UCLA back into the set, and the Bruins were able to avoid a fifth set with a 25-23 victory.

The Bruins completed the weekend sweep Sunday with a win over the Rainbow Wahines in a five-set thriller.

UCLA never led in the first set and fell 25-23. Although the Bruins hit .359 in what was a strong hitting set, the Rainbow Wahines hit an even better .486.

Sets two and three featured 12 and 13 ties, respectively, and each had five lead changes. UCLA managed to come out on top in both, 25-23 and 25-22, to take the set lead. Both teams struggled with hitting in these sets, as neither hit above .229 in either set.

Hawaii took the fourth set to force a decisive game five in which UCLA held Hawaii to a .000 hitting percentage in the 15-10 win.

May again led the team in kills with 18, and three other Bruins – Gates, freshman pin hitter Jenny Mosser and Rogers – also notched double-digit kills, all of which were career highs.

Junior libero Zana Muno posted a career-high 34 digs to tie for the fourth most digs in a game in UCLA history.