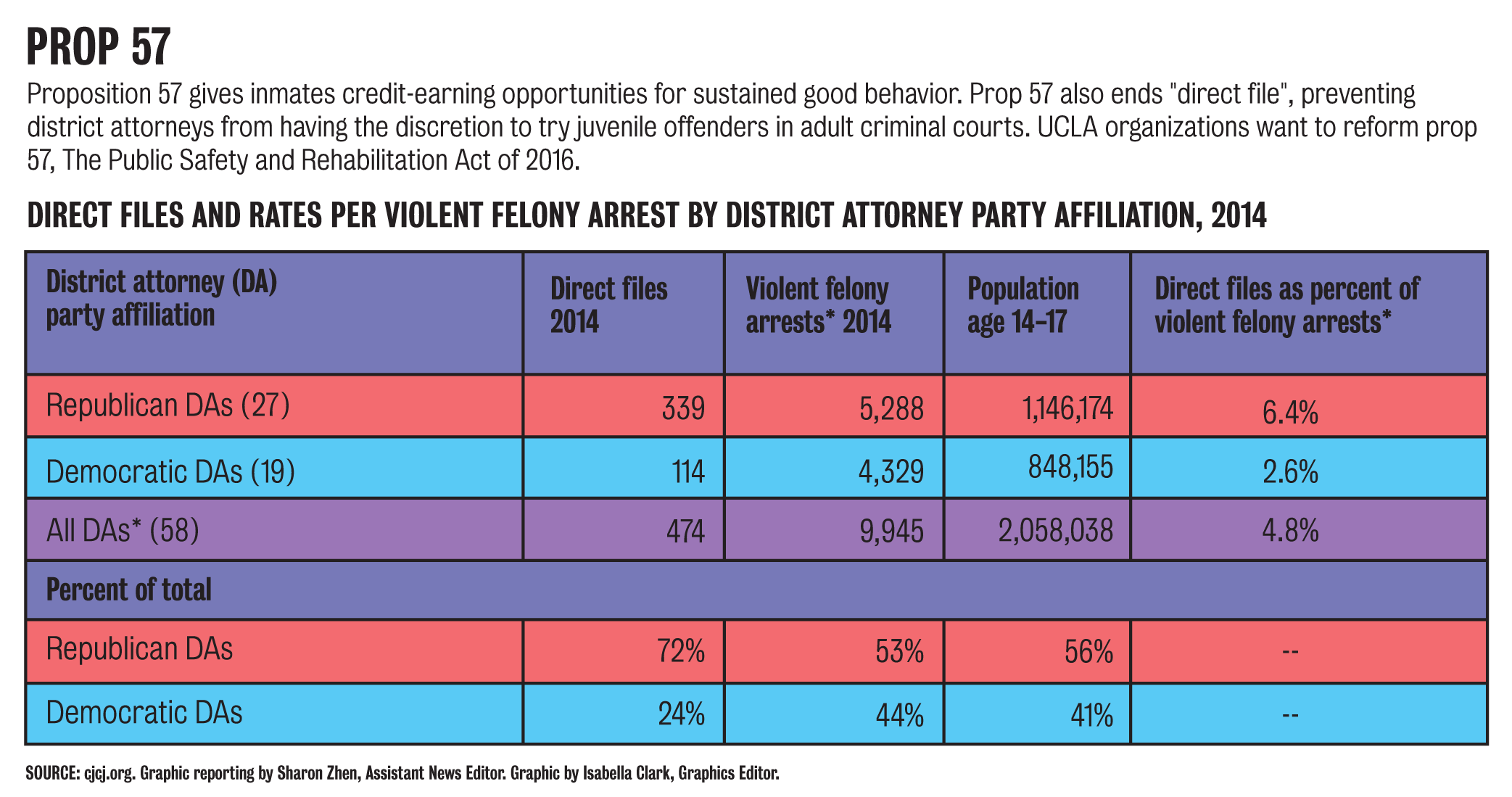 Organizations have been urging people to take advantage of the public comment period for Proposition 57 to ensure that the original intentions of the proposition are put into place.

Proposition 57, known as The Public Safety and Rehabilitation Act of 2016, was passed by voters in November and aims to review parole hearings and acknowledge inmates’ improvement in behavior.

Under the proposition, inmates who comply with prison rules or participate in in-prison programs, such as academic or vocational programs, can get a greater percentage of their sentence reduced, and nonviolent offenders can more easily get parole. In addition, the proposition mandates that judges, not prosecutors, decide whether juvenile defendants be tried in an adult court.

Andrew Winn, a UCLA alumnus and a member of the UCLA Underground Scholars Initiative, said the proposition removes any implicit bias that officials may hold. USI supports formerly incarcerated students and students with incarcerated family members.

“Prop 57 takes the power out and gives it to the most unbiased person in the room: the judge,“ he said.

Winn said that Californians for Safety and Justice, a nonprofit that advocates for prison reform, sent out proposed Proposition 57 regulations to the California Department of Corrections and Rehabilitation Regulation and Policy Management Branch, including details that would offer more comprehensive benefits for current prisoners.

Daniel Dart, a strategist for Californians for Safety and Justice, said he thinks individuals should participate in the public comment session before it ends on Sept. 1 to ensure that the main points of the proposition are upheld.

“Officials are now cherry-picking how to implement the proposition and are worried about how the taxpayer money gets spent,” he said.

Dart said he is concerned that the proposition only affects those who will be arrested in the future and does not help those already in state prison.

“It allows for some people to have life sentences for marijuana use and others to have very different consequences, as people who will be tried when Proposition 57 is in place may have relatively reduced sentences,” he added.

Jerron Jordan, a networks manager for Californians for Safety and Justice, said that before Proposition 57, California did not give inmates with good behavior many opportunities to reduce their sentence, unlike many other states.

“We are now up to line but still have to work on some parts of the proposition to make sure that those in prison get awarded more than educational merit credit, or credit that recognizes prisoners who earn high school diplomas or higher education degrees,” Jordan said.

Dart said that as part of the campaign to reform the proposition, the group is pushing for the proposition to apply to inmates who were tried as adults but are now eligible for an earlier parole date under senate bills 260 and 261. SB 260 and SB 261, which were passed in 2013 and 2015 respectively, give earlier parole dates to inmates who were charged as adults even though they were minors at the time of their crime.

The group is also calling for those sentenced to life in prison under California’s Three Strikes Law to be eligible for early parole, Dart added.

“Having been incarcerated, I didn’t feel as though there was much of an incentive to shorten my time, but Prop 57 can change that,” Dart said.

Jerron said he thinks incarcerated individuals who have displayed changes in their behavior should be allowed to come home.

“Several friends of mine who are still in jail have gotten their degree and taken the anger management or domestic abuse classes,” Jerron added. “Judging them fairly speaks to what accountability and public safety really mean; accountability is not about punishment, but rather about reconciliation.“