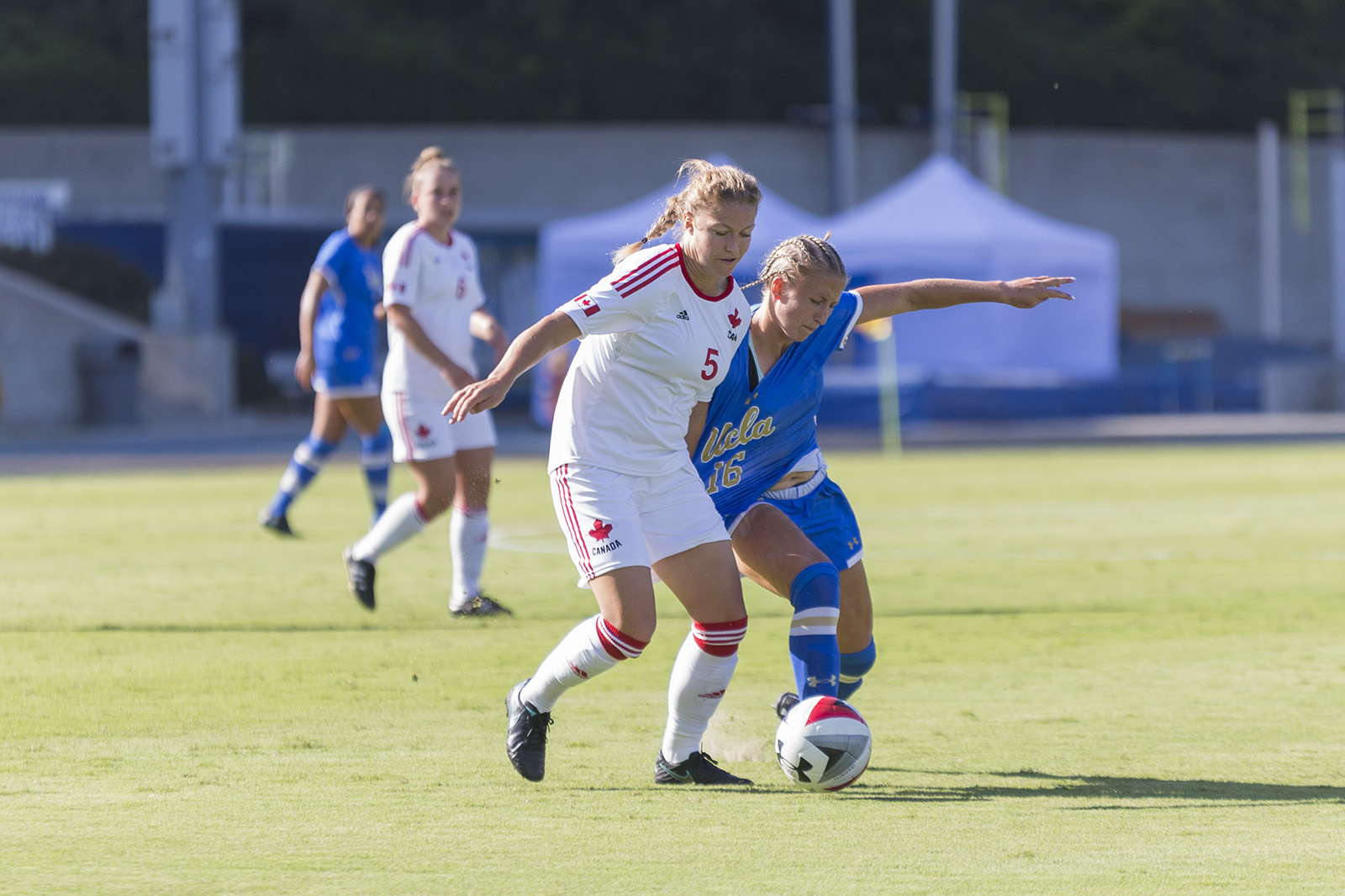 Junior forward Hailie Mace scored one of the Bruins’ five goals Friday. Mace said that crosses had been one of the team’s main focuses in practice, which they executed against SDSU. (Aubrey Yeo/Daily Bruin senior staff)

After their opponent, San Diego State (1-1), went back to its bench to get its lineup ready, No. 9 UCLA women’s soccer (1-0) lingered on the field for a minute or so, practicing crossing the ball into the box and finishing in the corner.

This wasn’t an unusual warmup for the team, but it proved particularly applicable as the Bruins used crosses to score the first three goals of the game in what would eventually be a 5-1 win in their regular season opener.

“If you practice (crosses) then (the game) is like another practice and you keep doing them,” said junior forward Julia Hernandez. “We scored three goals out of that and that’s awesome.”

After the Bruins dominated possession but failed to score in the first 30 minutes, they eventually found their rhythm with the volleys inside the box.

Junior forward Hailie Mace scored on a cross in the 36th minute, and later crossed it to sophomore midfielder Jessie Fleming for a goal in the 50th, who then lobbed it to Hernandez for a header in the 62nd.

The team put an emphasis on that play throughout the previous week in practice, and Friday night they made it look like almost mechanical.

“We realized we weren’t playing our best so we just picked it up and decided to score,” said Mace. “Our first couple games, our crosses weren’t to the spots they were supposed to be and our timing was bad so we’ve been working on that a lot.”

Hernandez scored her second goal of the game after she rebounded her own penalty kick.

After SDSU scored on a penalty kick of its own, redshirt senior midfielder Claire Winter finished the scoring for UCLA with a goal off a corner kick in the 85th minute.

“We just talk about getting endlinea lot,” said coach Amanda Cromwell, revering to the line running from corner to corner along the goal. “A lot of times when you cut inside too much, it’s easier to defend. It’s really just a strategy that we use because we have players that are good at it.”

Mace also was confident in the team’s ability to create opportunities from the outside, crediting freshman midfielder Delanie Sheehan for the assist on her goal.

“All I remember (from the play) is that Delanie is really good at getting endline,” Mace said about her goal. “I just knew to get in a gap and she’d find me.”

This was the UCLA’s second straight high-scoring game, after an 8-1 shellacking of CSU Bakersfield in an exhibition game Aug. 13.

They should face tighter competition against Long Beach State and Santa Clara later in the week, who both had winning records last season.

“The hard thing for other teams this season against us I think will be figuring out how to shut down our attack,” Cromwell said. “We can attack so many different ways with so many different players, and I think that bodes well for scoring goals.”