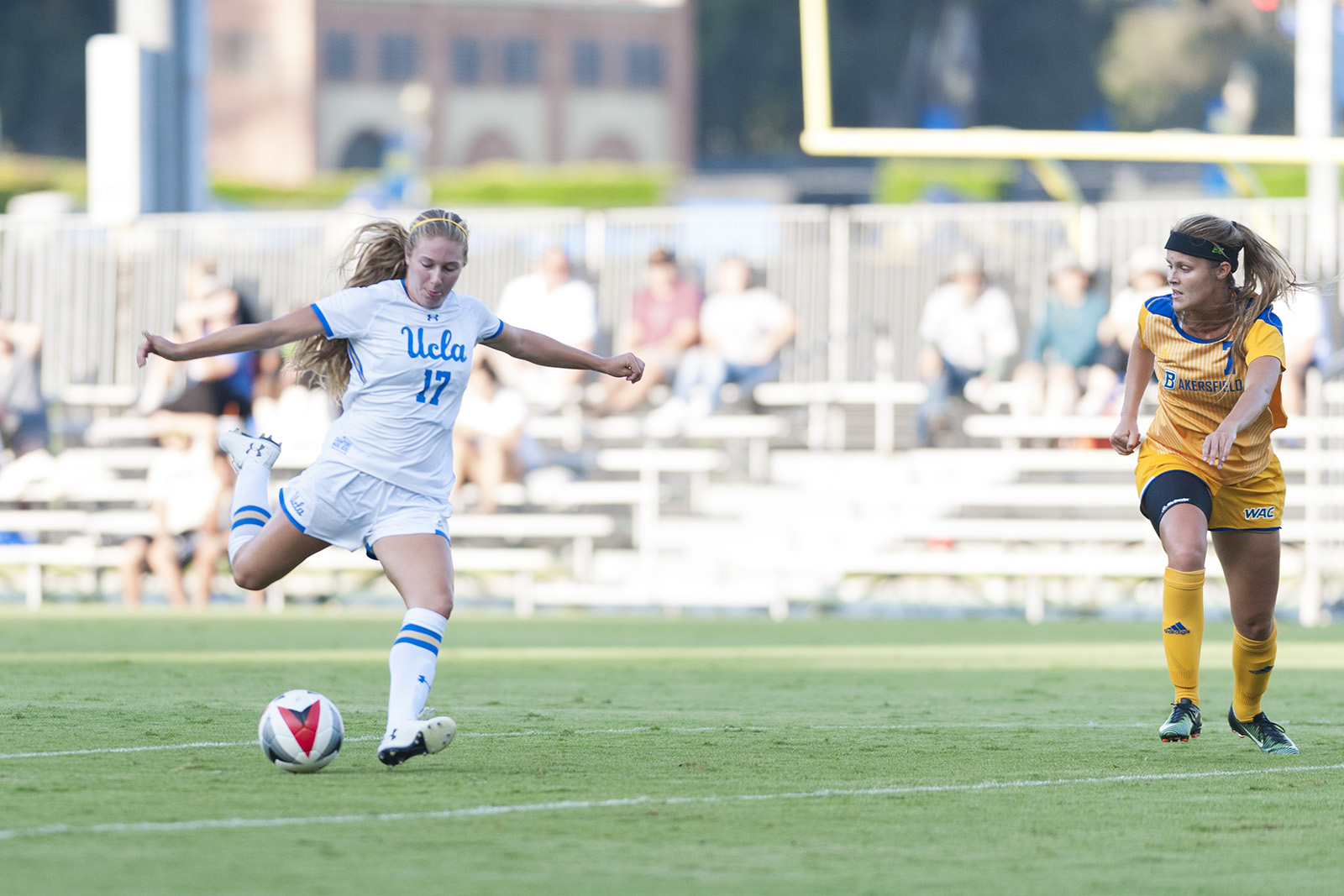 The Bruins won both of their exhibition matches this weekend, dominating CSU Bakersfield on Sunday with eight goals all scored by different players. (Axel Lopez/Daily Bruin)

The commentator announced the second goal incorrectly in Sunday’s women’s soccer exhibition game, saying the person who assisted on the goal was the one who scored.

Luckily, he got a chance to redeem himself.

He announced the third goal correctly, and the fourth and the fifth. By the time UCLA finished with an 8-1 win over Cal State Bakersfield, the mistake had long been forgotten. It was one of the few that were made the entire game.

Two nights before, the Bruins only scored one goal in their opening exhibition game against Canada FISU. On Sunday night, scoring clearly wasn’t the problem.

“We were a lot more consistent with our finishing, and I think it showed,” said freshman midfielder Olivia Athens, who scored early in the second period.

The Bruins scored two goals in the first 30-minute period, two in the second, and finished the final period with a four goal onslaught. When they weren’t scoring, they were constantly pushing the ball toward the net, with 21 shots on goal.

“It was awesome. It was fun,” said freshman midfielder Delanie Sheehan, who scored another one of the eight. “I think we’re starting to learn each other really well.”

The eight goals were scored by all different players in several different lineups, with UCLA rolling out 24 players overall.

Four of the eight goals were scored by freshmen. Coach Amanda Cromwell called her freshman class one of the country’s most talented.

“One of our biggest challenges right now is fitting everyone on the field,” Cromwell said. ”We have more than 11 starters, that’s for sure. … We’ve started two different lineups and we wanted to see different combinations of players together, and I think what you’re seeing is some really exciting attacking soccer.”

In the second period, the Roadrunners struggled to get the ball past the midfield line. Of the seven shots that Bakersfield took, only three were on goal.

UCLA’s hyperactive offense prevented CSUB from ever getting into a rhythm.

“We definitely took more shots tonight but we had a huge percentage on goal. That was one of our focuses just that we talked about yesterday,” said Cromwell, who still thinks they can be more dangerous on offense and wants them to score more on set plays. “Put it on frame, make them make the save.”

The eight goals were the most the Bruins had scored since 2011, topping their high of seven from last year.

Though UCLA won both of its exhibition games, they don’t technically count on its record. The team still has over a month before league play starts, and won’t have any more games with three 30-minute periods.

The season is long, and the Bruins showed that though good starts are nice, finishing is what matters.