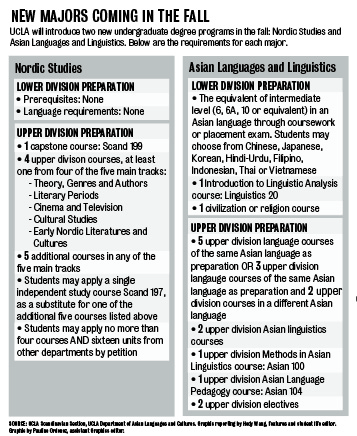 Timothy Tangherlini, a professor in the Scandinavian section, said the department created the Nordic studies major because its faculty saw that students have more interest in the Nordic region as a whole. He added he thinks there needs to be more study of Scandinavian countries due to their deep involvement in global affairs, such as climate change and the refugee crisis.

“We thought that this was a really important area and an opportunity for us to give UCLA students … a very unusual perspective on a part of the world that’s pretty much ignored by most other universities,” Tangherlini said. “Since we have the expertise at UCLA, here’s an opportunity for students to understand … the whole Nordic region from a regional perspective.”

Tangherlini said the new major would allow more students to participate in the University of California Education Abroad Program in Sweden and Denmark. He said that although Sweden and Denmark are two of the most popular programs offered by the UCEAP, many students’ majors do not meet the curriculum requirements for those programs.

While designing the major, Tangherlini said the department talked to undergraduate and graduate students, consulted with other universities and reached out to industry experts.

“A lot of this has been student-driven,” Tangherlini said. “It’s been a lot of consultation and talking to students to figure out what they’re interested in and what they would hope to learn and how we can help them achieve their goals.”

“Many (students) are interested in teaching jobs after graduation,” Iwasaki said. “Although our (Bachelor of Arts) will not give them teaching credentials, it will give them the opportunity to learn how to teach languages.”

Stephanie Cuellar, an undergraduate student affairs officer in the department, said the major will allow students to take a mix of courses on language, linguistics, teaching and culture. She added students can also take linguistics courses outside of the department. Two new upper division courses, Asian 100: “Methods in Asian Linguistics” and Asian 104: “Asian Language Pedagogy,” were designed for the major.

“As it becomes a more recognized major, I hope it serves the needs and goals of students who want to learn more about Asian languages … dig deeper in Asian linguistics or pursue teaching,” Cuellar said.