Tracing the UCLA stripe through history 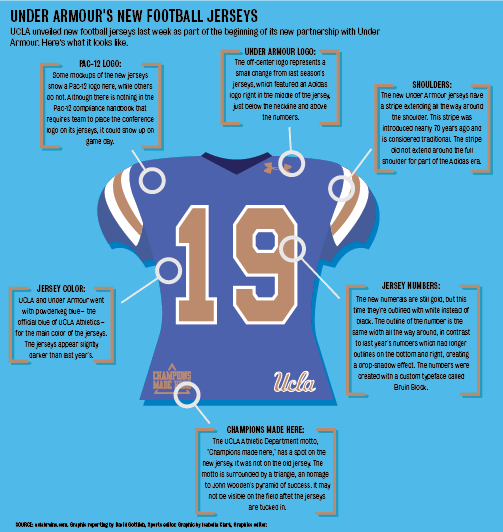 UCLA football’s Jim Mora said the deal’s significance was unquestioned, but one specific aspect has remained a point of contention.

Traditionally, the white and gold stripe extends from armpit to armpit, completely separating the sleeve of the jersey from the body. Here’s a brief history of the stripe:

UCLA got credit for inventing the shoulder stripe because Red Sanders – who coached the football team from 1949 to 1957 – had it put on the jersey. Some even refer to it as the “UCLA stripe.”

Sanders instituted several additional changes, such as trading out the navy blue for powderkeg blue, which is what UCLA will be wearing this season.

These changes supposedly gave the impression of motion, while also making the Bruins harder to scout on the black-and-white TV sets the games were broadcast on.

To this day, Sanders is the only coach to bring a football national championship to Westwood, doing so in 1954.

The deal between UCLA and Adidas that just ended began right before the turn of the century.

Adidas rolled out jerseys similar to Sanders’ right away, complete with a shoulder stripe. That move is very similar to what Under Armour did earlier this month.

Up until 2009, UCLA’s jerseys always had a full shoulder stripe. This changed in 2010, when Adidas shortened the stripe significantly, so it didn’t extend all the way around the shoulder.

This drew the ire of many UCLA football fans, who began calling on the team to fix the jersey. One ESPN reporter said the stripe was “pitifully truncated and woefully tinkered with” during this time.

UCLA began to provide an explanation to fans who were upset about the uniform.

“It’s because of the construction of this Techfit jersey that Adidas has made,” Mora said in the video. “This is the best jersey in sports.”

Mora went on to explain that his players loved the jersey, but a seam needed to come across the shoulder in order for it to fit correctly.

The current coach went as far as to say that a looser jersey would give UCLA a disadvantage, and that his team was looking for a jersey that was tight to the shoulder to keep the opposition from grabbing it to make tackles.

“We would love to have the stripe extended … but right now that’s not a possibility,” Mora said. “But I really believe the people at Adidas are working hard on it.”

One of Mora’s tweets mentioned that Adidas was working on rubberized paint that would illustrate a full shoulder stripe, even if it wasn’t stitched right onto the jersey.

These stripes did not wrap all the way around the shoulder, ending closer to the neckline than the armpit, therefore failing to please many fans.

At the press conference announcing the deal in May 2016, one reporter did ask if the shoulder stripe would be present in the new Under Armour jerseys.

Athletics director Dan Guerrero said it would be, but UCLA didn’t wait a whole year to enact the change.

With one tweet in June 2016, UCLA football let its fans know that the shoulder-stripe woes would be coming to an end.

In the final year of the Adidas deal, the apparel company got it right, restoring the classic, adored look of a full stripe sewn onto the jersey.

UCLA hosted a private reveal party for its season ticket holders July 15 at the Rose Bowl.

The new jerseys are shown with a full shoulder stripe, running from armpit to armpit, just like it was close to 70 years ago.