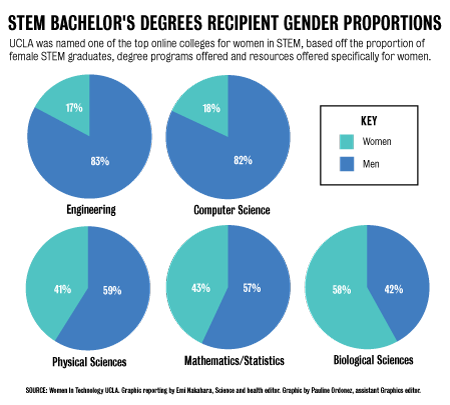 An education organization named UCLA one of the best online colleges for women studying science, technology, engineering and mathematics in June for its online degrees and women-centered organizations.

The SR Education Group, an independent education organization, scored various universities on how well they supported women studying STEM subjects online. They ranked UCLA 22nd out of 64 top-scoring schools for the variety and quality of online STEM degrees it offers and organizations offering online support for women STEM students.

“(For each school) we were looking for specific websites for women in STEM,” Taitum Ridgway, a marketing manager for the SR Education Group, said. “We noticed that with organizations at UCLA, there was a dedicated person in charge to make sure the page was updated with services and support for female STEM students.”

While women now outnumber men in obtaining college degrees, men are still the majority of recipients of STEM degrees, according to the National Center for Education Statistics. Degrees for computer science and engineering in particular have the largest gender disparity.

UCLA was ranked highly in part for its various campus organizations that try to address gender disparities in STEM fields.

Advancing Women in Science and Engineering is a campus organization that hosts forums and provides mentorship and community outreach for women STEM students both in college and middle school.

Madeline Gelb, a graduate student in chemistry and engineering and a member of AWiSE, said early on girls are just as enthusiastic about STEM fields as boys, and typically do not see STEM as a male-dominated field. However, Gelb said women begin to leave STEM fields and jobs as they get older.

“There’s no mental blockage (against STEM) when female students are younger,” said Gelb. “But when they see there aren’t as many female role models (in STEM) later on, they start to opt out.”

Gelb participates in the annual AWiSE STEM Day community outreach event, in which AWiSE partners with EmpowHer Institute to invite girls from local middle schools in Los Angeles to participate in lab activities such as making ice cream and visiting the UCLA planetarium.

Gelb said a similar event when she was in middle school inspired her to study engineering in college. However, she said when she was an undergraduate student, two out of 20 engineering professors were women in her school.

“It’s hard to put yourself in a position of ‘yes I can’ when you don’t really see other staff with the same gender,” Gelb said.

STEM faculty members also experience this disparity. Andrea Kasko, a bioengineering professor, said she began to notice there were few women in meetings, conferences and classes when she became a faculty member.

“Once you start noticing, you can’t stop,” Kasko said. “I’m glad I didn’t notice when I was younger, as I think I would have felt a bit isolated at times.”

Women in Technology, another organization that addresses gender disparity in STEM, provides resources and research relevant to women pursuing STEM careers on its website.

Sophie Tanaka, who graduated in 2016 with a degree in psychology and conducted research for WIT, co-authored a report on strategies to increase gender diversity in STEM careers. The report says it is important for policy changes, such as adjusting hiring processes, in order to reduce gender disparity in STEM departments in universities.

“It’s wonderful to hear UCLA is a leader to increase diversity of STEM students,” Tanaka said. “Not only is it important to push female students toward STEM, but to shift the environment so they’re more comfortable.”

Rebecca Sadwick, who graduated in 2014 and also conducted research for WIT as digital technologies initiative program manager for the Luskin Center for Innovation at the Luskin School of Public Affairs, said she said she thinks there is still room for progress in improving opportunities for women in STEM fields.

“The final marker of success would be when we no longer need organizations for women in anything, and see equally proportional representation of women’s involvement in STEM,” Sadwick said.