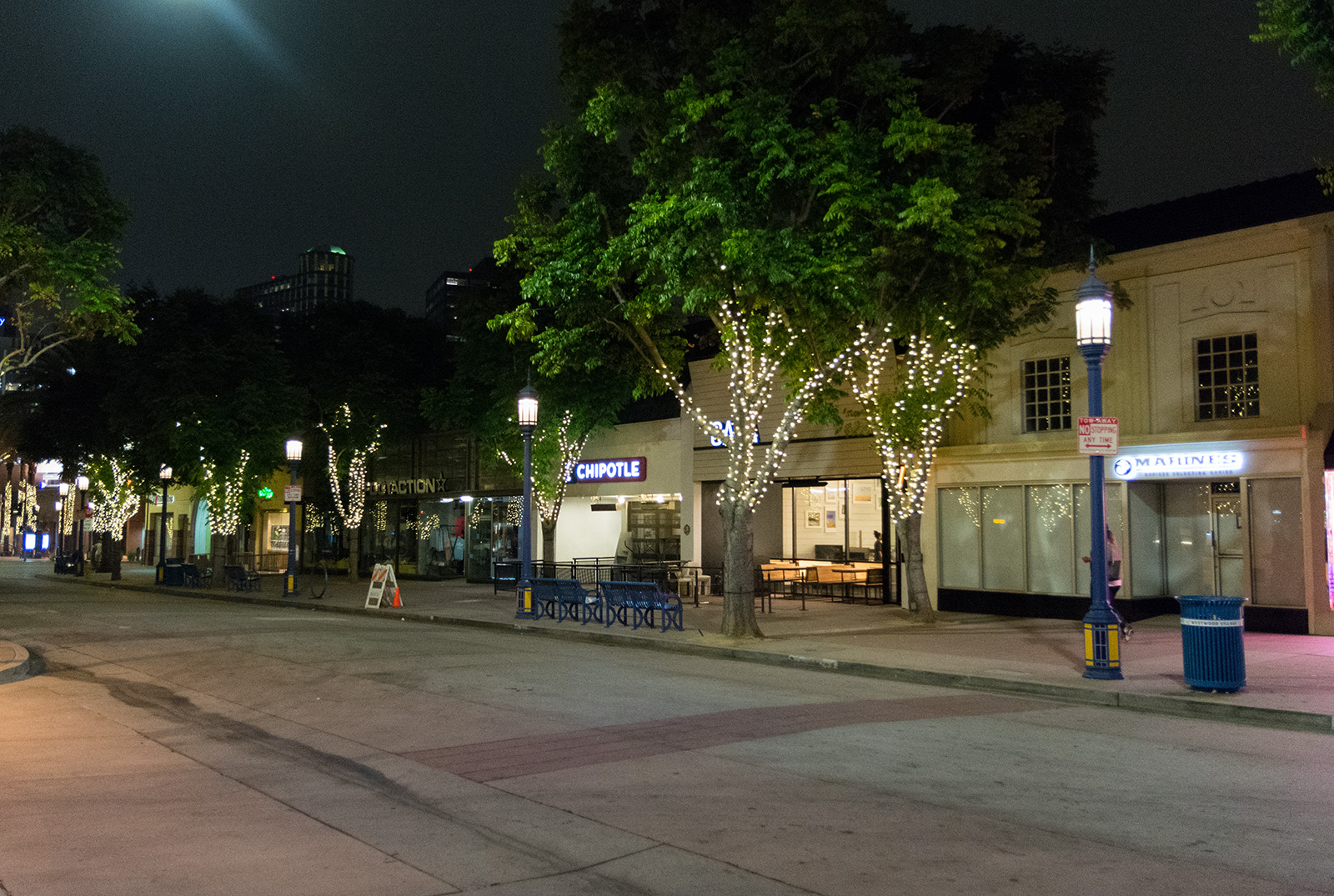 Westwood community leaders and students have differing views about what nightlife should look like in the Village. (Eileen Lising/Daily Bruin)

Westwood does not seem to be the place students have in mind when they want to have a night out on the town.

In April, the Westwood Neighborhood Council approved an alcohol permit for a microbrewery on Broxton Avenue to fill a space vacated by Yamato, a sushi restaurant. However, the pub will need to undergo further review before it becomes established, said Michael Skiles, president of the Graduate Students Association.

Skiles said he went with a group of graduate students to the council meeting to support the microbrewery. He said he supported the microbrewery because he thinks nightlife in Westwood is severely lacking for students.

“(If you want) a place to go out and you’re not in a (fraternity), where are you going to go to party and dance?” Skiles said. “It’s almost certainly going to be Hollywood or Santa Monica or (downtown Los Angeles), because all of the establishments in Westwood are very low-key.”

Skiles said even though the council supported the microbrewery, he thinks they generally oppose developing student nightlife in Westwood. He thinks the council prioritizes older and permanent residents who prefer quieter and more expensive establishments.

Sandy Brown, Westwood Neighborhood Council vice president, said although students are an important part of Westwood, she personally thinks the community’s permanent residents deserve to live without being disrupted by the nightlife.

“What if you bought a house for $4 million, and you’re paying $40,000 just for taxes every year?” Brown said. “Aren’t you going to be more conscious of what comes into your neighborhood than someone who’s only here for a few years and doesn’t pay any taxes, and then is gone?”

Brown said she supports the plans for the microbrewery, but added she thinks every establishment in Westwood needs to be reviewed in accordance with city ordinances. She added the council is not trying to hinder nightlife in Westwood, but thinks students are making demands for more nightlife without understanding the specific requirements for business permits in Los Angeles.

Skiles said many nightlife establishments in Westwood have to deal with restrictions. For example, he said Rocco’s Tavern is not allowed to use its front door past 10 p.m. or open its large windows. Brown said the bar’s windows must be closed because the owner of the apartment building across the street from Rocco’s found the noise level at one of the bar’s other locations to be too high.

Alexander Manos, managing partner at Rocco’s, said the front door policy is part of a city ordinance that the building has had for about 30 years. He added he thinks the challenges Rocco’s has faced are normal for opening any business in Los Angeles, and not necessarily only establishments that cater to nightlife.

The nightlife in Westwood, however, differs from that of other college towns, such as Berkeley.

Brittni Felker, a floor manager at Jupiter, a restaurant and brewery in Berkeley, said she thinks the city’s nightlife caters to both students and permanent residents by informally designating areas of the town for different groups.

The community in Berkeley helps the town thrive too, said Jupiter general manager Jessica Tung. She added the older residents and students sometimes have similar tastes in food.

“Berkeley is kind of an anomaly,” Tung said. “Even the rich people are on the ‘hippier’ side. They don’t tend to want as fancy of food.”

Although Skiles and Brown see nightlife differently, they both agree there are specific areas far from residences that would be better suited for student nightlife. For example, Brown said she thinks the microbrewery on Broxton Avenue is in an appropriate location for nightlife.

Skiles said he hopes to push for more nightlife in Westwood by working to increase student representation on decision-making bodies in Westwood.