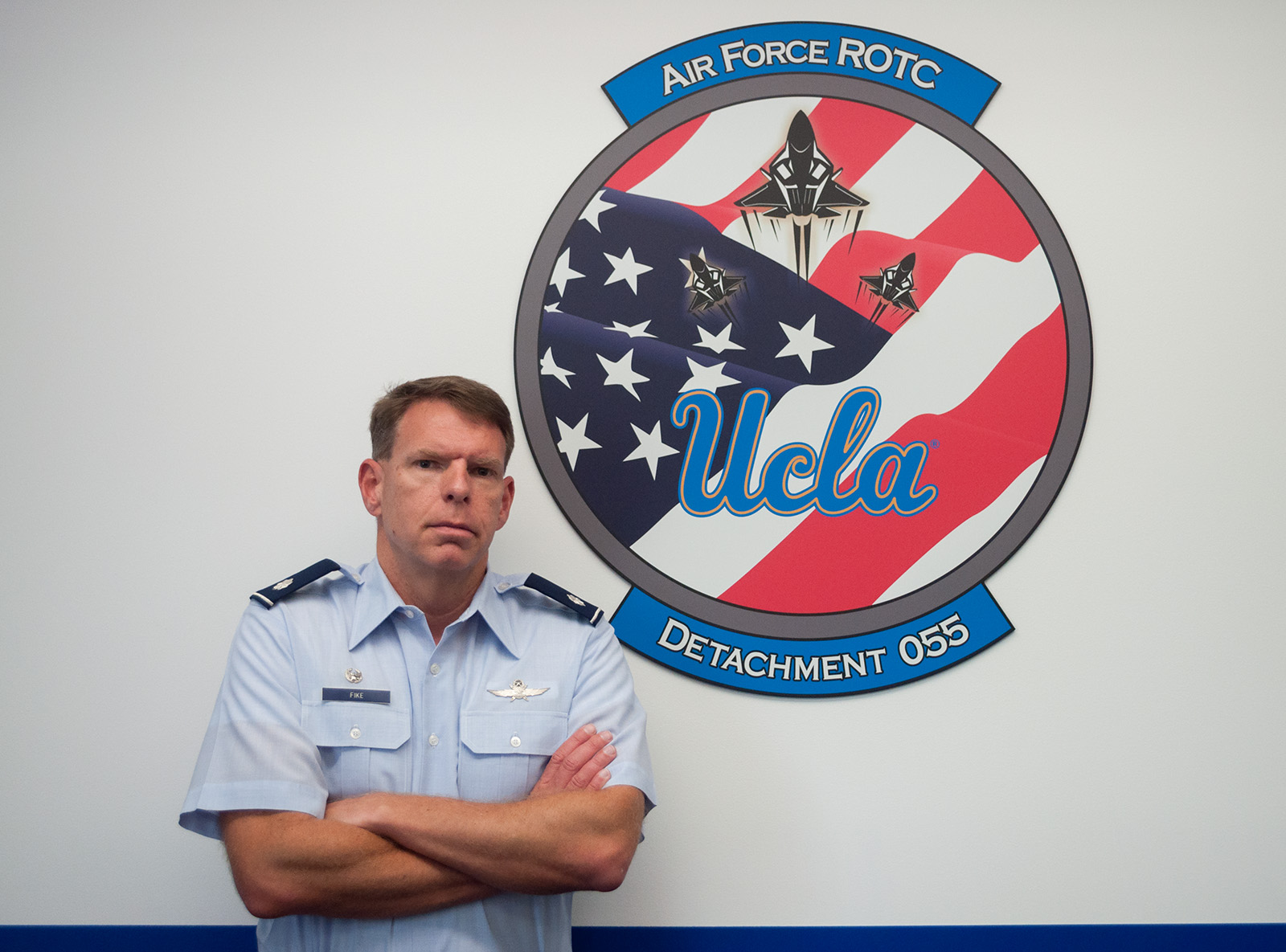 A dozen handwritten cards fill Lt. Col. Bruce Fike’s office wall, many of them from cadets thanking him for training them and telling him about their current assignments.

For Fike, those cards represent the memories he wants to take away when he leaves his position.

After leading UCLA’s Air Force Reserve Officers’ Training Corps for the past three years, Fike is retiring from his position to become a junior ROTC instructor in a high school in Colorado Springs, Colorado.

Fike, who has served in the Air Force for more than 30 years, promoted leadership development among ROTC cadets by improving creative training programs and leading by example.

During his time at UCLA, Fike revived a leadership lab, during which junior and senior cadets design and lead training programs that simulate real-life scenarios they may face in active duty.

Some of the simulations in the trainings include monitoring and protecting access to a certain area and dealing with improvised explosive devices.

The time for the leadership lab was previously used for cadets to practice marching, but Fike said he revived the program because he wanted cadets to learn more skills relevant to the amount of training they’ve had.

Alejandro Mosqueda, a ROTC cadet and fourth-year Russian language and literature student, said Fike is able to switch between the roles of a strict commander and a caring figure to the cadets.

Mosqueda said he thinks Fike interacted and connected more with students than the previous ROTC commander.

Courtney Tomas, incoming Cadet Wing commander and a third-year psychology student, said Fike would join the cadets in their physical training even at 6 a.m. on a Saturday.

“If we’re running four miles or doing dozens of pushups, he’s right there along with us,” Tomas said.

Mosqueda said Fike even flew to Alabama to attend the cadets’ graduation from Field Training Preparation, an intensive lockdown training that cadets attend before they officially sign a contract with the military.

“He paid for our lunch and just flew back after,” he said. “It was just really nice to see him to fly all the way on his own course just to see our graduation.”

Fike said he thinks it is important for a leader to be present and know what is going on in his cadets’ lives.

When the ROTC headquarters decided to dismiss a cadet for alcohol possession as a minor, Fike appealed the decision because he believed the cadet would be able to contribute to the Air Force.

“All they saw on paper was that he got into trouble and they don’t see the people,” Fike said. “If I didn’t know anything about the kid and if I hadn’t taken the time to learn about him and see that he would be an asset for the Air Force, I never would have gone to fight for him.”

Fike said he tries to lead by example when interacting with senior and junior cadets so that they will do the same when they lead underclassmen and become officers in active duty, he said.

“It’s a big thing that you talk the talk and you walk the walk,” Fike said. “If I’m telling you to do something, I’m demonstrating it.”

In his upcoming position as a junior ROTC instructor, Fike said he expects to be more of a father than a commander because many of the students are from low-income families and may lack male role models.

“I think there is a huge potential to do lots of good – really maybe help some kids figure out their lives, make some good choices,” Fike said.

Fike said he is drawn to teaching college ROTC and junior ROTC because he likes seeing cadets grow and develop as people and future officers.

“I love the fact that I got to see these kids coming in at 18 years old, (who) don’t know anything about the military,” he said. “Over the course of three years here, I got to see them grow into fantastic leaders in the future and second lieutenants in the Air Force.”