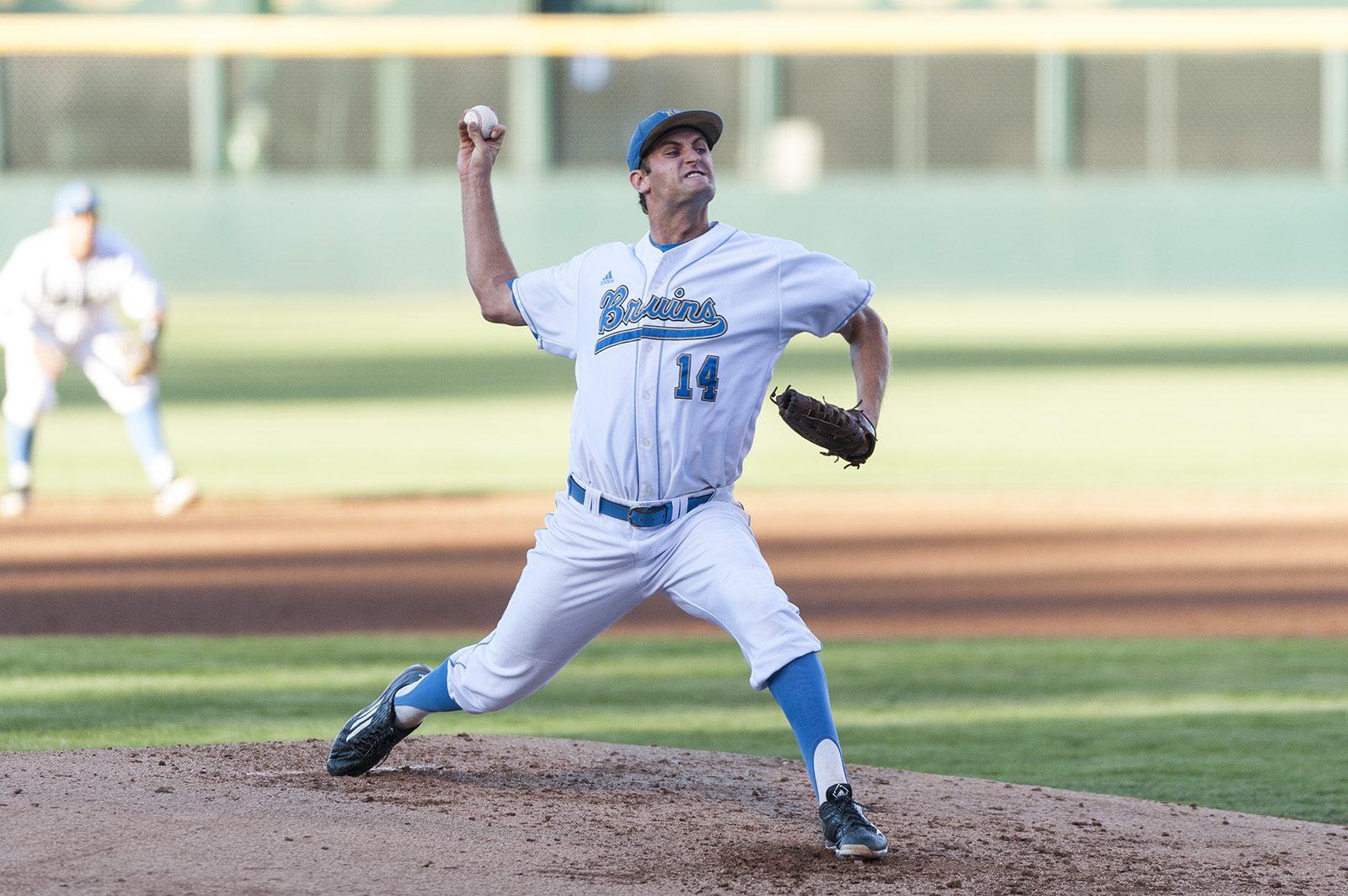 Junior pitcher Jake Bird appeared in 18 games for the Bruins in 2017 and finished the season with a 5-5 record to go along with a 2.75 ERA. Bird also managed to strike out 42 batters in just under 56 innings. Bird is projected to be an early-round pick in the MLB Draft which starts June 12.
(Michael Zshornack/Photo editor)

As his second-grade year came to an end, an 8-year-old Jake Bird signed his friends’ yearbooks.

“Save this autograph for when I’m playing in the major leagues,” he told them.

Fast forward to the start of Bird’s junior year in college – after which Bird would be eligible for the MLB Draft – and it looked like that elementary school kid was right all along.

Bird began the season with two of the best starts of his career. The right-handed sinkerballer yielded one run, striking out 13 batters over 13 innings.

“Bird was a wild factor in his first couple starts,” said coach John Savage. “People were like ‘Whoa.’ Fastball was low 90s, slider was a wipe out.”

Then he got hurt.

Shoulder inflammation kept Bird off the field for more than a month at the outset of the most important year of his career. That’s when the fight began to earn that draft stock back.

Bird grew up in Valencia, California, as the second-oldest of four boys. Their father coached them in the standard variety of youth sports: soccer, basketball, flag football and baseball.

“I couldn’t ask for better kids,” said Heidi Bird, Jake Bird’s mother. “If they could choose, ‘Who do you want to have over?’ They’re fine with just each other.”

Bird played both baseball and basketball in high school, but he knew that he was better at baseball. Things got more serious when he stopped playing basketball November of his senior year.

“When I stopped playing basketball was when I really got the control down,” Bird said. “The velocity spiked a little bit and then scholarship offers came in and the pro letters started coming in.”

As MLB scouts and college recruiters started to fill the bleachers at West Ranch High School’s baseball facility, with the then-high school senior on their radar, Bird had to make a choice: Division I or the minor leagues.

Bird had never been on a plane until his senior year of high school, and the prospect of leaving his family was devastating. The possibility of him going to the East Coast was enough to jerk tears from his mother and youngest brother.

“I knew there’s probably some life skills I would have to learn before I went out and did that,” Bird said. “I heard the minor leagues are a rough time if you’re a little kid that doesn’t really know what he’s doing on his own.”

When big league teams asked what it would take for him to sign, Bird pushed his number close to $1 million, partially to keep them from drafting him so he could go to UCLA, where his dad went to school.

That plan worked. No team drafted Bird out of high school, and he headed to Westwood to start working with Savage, one of the nation’s most reputable coaches when it comes to pitching.

After working through two years of Savage’s system and a summer in the prestigious Cape Cod Baseball League, Bird took hold of the Saturday job, slotting in right behind projected first-round pick Griffin Canning.

“I knew (Canning) was on Fridays,” Bird said. “We pitched on the same days during the intersquads, and each time out, I wanted to just beat him.”

Savage called Bird one of the hardest workers on his staff, and all of that hard work seemed to be paying off, as evidenced by Bird’s early success. But Bird’s shoulder inflammation didn’t just keep him from pitching in games for a month; it kept him from pitching like himself for a good chunk of the year.

Bird’s delivery is crude and unorthodox, making it more difficult for him to be able to consistently repeat his delivery, Savage said.

“He kind of lost that touch and feel, so when he came back he just wasn’t as sharp,” Savage said. “It wasn’t shocking, (but) frustrating because he kind of got to that point where he got past that.”

After a few rough relief outings, Bird returned in a midseason game against USC. Senior Moises Ceja, who was filling in on Saturdays while Bird was hurt, got knocked out after just 1 1/3 innings pitched. Bird came in and fired 6 1/3 scoreless innings, striking out seven. After the appearance, he won the Saturday job back.

“His stuff took a hit, no question, but it seemed to kind of resurface,” Savage said. “The two bullpens I saw before regionals, I’m like, ‘Boy, this looks a little different again.'”

A few starts later, Bird got the chance to perform in front of a bevy of scouts at the Long Beach Regional with 4 2/3 scoreless innings in relief. Savage said Bird should have won that game, and suspected Bird would have had a big postseason had UCLA not been eliminated so quickly.

Bird’s stuff was back: a heavy sinker that can touch 94, a hard slider that registers between 86 and 88, a change up and a curve ball. Savage recommends that teams initially try him as a starter pitcher, but also thinks Bird’s ability to get ground balls and his dominance over right-handed hitters could make him a good reliever.

As Bird’s third year of college comes to an end, he’ll very likely be signing with a major league team in the coming months.

But before going pro, Bird got to spend three years close to his family in Valencia, making frequent visits home to play golf in his neighbor’s yard, video games with his brothers and catch with his dad. His mom helped with his laundry.

The economics student got to take advantage of his education, earning Pac-12 All-Academic Second Team honors with a GPA of 3.56.

The MLB Draft begins Monday with the first two rounds. Since Savage said he’s hoping Bird goes in between the fifth and ninth rounds, the righty will likely hear his name Tuesday, when selections for rounds three through 10 will be announced.

“There’s still a lot of interest,” Savage said. “He’ll get drafted pretty good. But it was tough because he just missed so much time.”