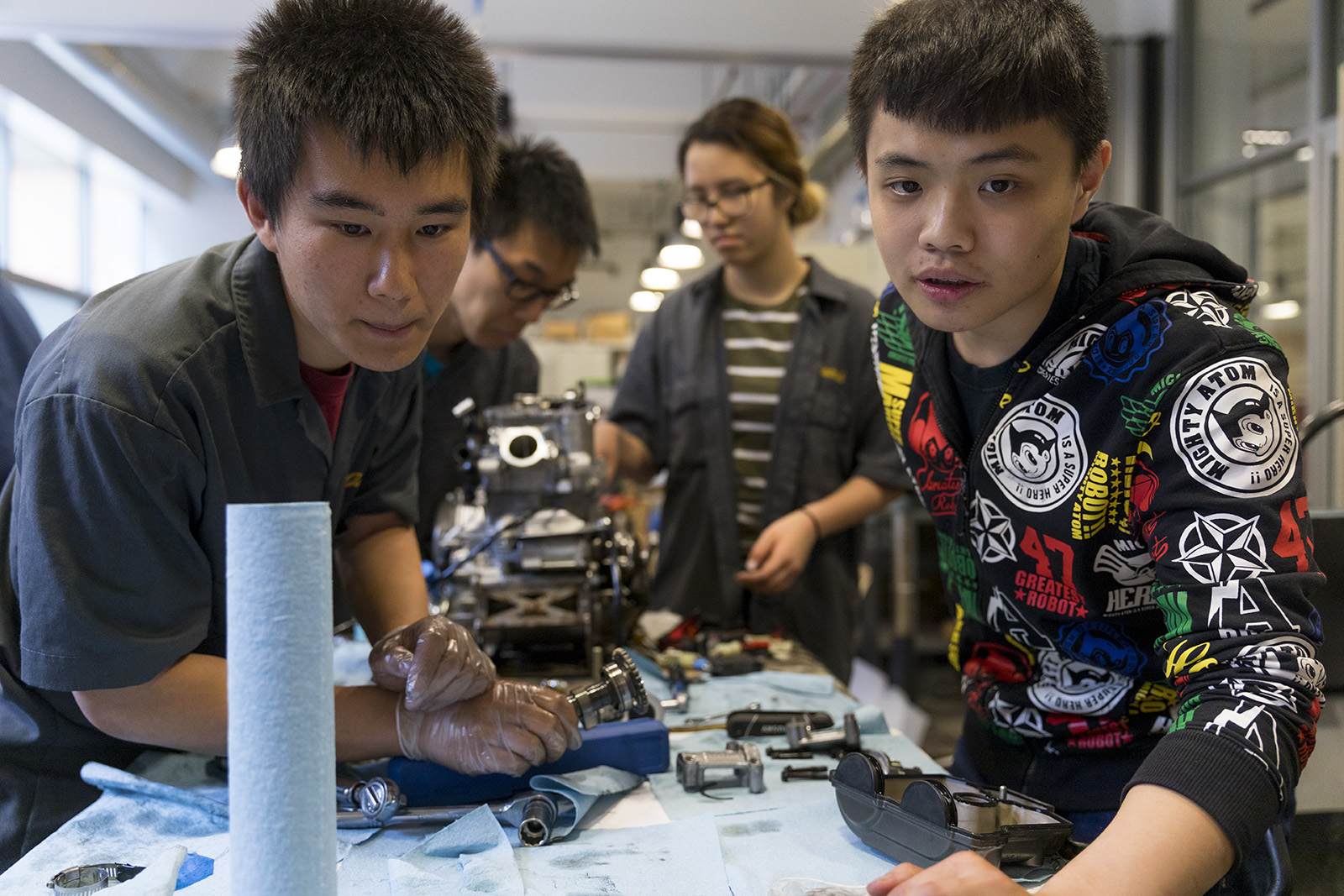 Members of Bruin Racing regularly have to tear apart major mechanical components – like the motorcycle engine that powers the car – and rebuild them from the inside out. (Dayoung Lee/Daily Bruin)

Dozens of students converge in a small workshop in Boelter Hall every day. It is constantly crowded, always smells of motor oil and produces several brand new cars each year.

Bruin Racing, a UCLA student-run motorsports organization, builds competition-ready race cars among a mix of motorcycle engines, aluminum wheel hubs and a host of other unassembled chassis components in the Student Creativity Center.

A small group of mostly engineering students founded the original club in 1999 to build a rally car and competed in one team called Baja.

Baja’s car was a vehicle about the size of a dune buggy, but with a motorcycle engine at the back, a single seat, off-road ready suspension with small diameter pipes for a roll cage and chunky tires for muddy terrain.

Baja is now 18 years old, and the club has since grown to more than 200 students across three teams. The team moved away from its initial name, UCLA Racing, this year to avoid legal trouble, because clubs are not allowed to directly align themselves with the university, and from 2017 onward the club will be known as Bruin Racing.

SuperMileage and Electric Vehicle are sister teams that focus primarily on efficiency. SuperMileage is currently building a car to extract more than 1000 miles of driving range from a single gallon of gasoline.

“It is a very long process that is condensed into a very short amount of time,” Hemminger said. “Typically a build cycle (for a normal car) is about six years. With us, Formula and Baja run one-year design cycles.”

To add to the stress of designing, building and racing the cars, club members also have to be conscious of their budget. Baja and Formula each need about $45,000 every year to make it to competitions with a complete car, and S&E needs about $25,000, Hemminger said.

Luckily for Hemminger and his team, Bruin Racing has been sponsored by SpaceX, Raytheon, Northrop Grumman and other companies that either donate money or provide free work the students cannot do on their own.

“They build our wheel centers, hubs, uprights and pretty much all the precision components that we couldn’t do in-house,” Hemminger said. “That’s probably 15,000 to 20,000 dollars worth of (Computer Numerical Control) machining that they do for free. That’s huge.”

Boeing and other companies also donate expensive materials like carbon fiber to help with the build process, Hemminger said. He added the team would never make it to a single competition without this help.

Simon Rufer, a first-year mechanical engineering student, said he cared little for cars or racing and initially joined the club to gain experience he thought he would need to pursue a career in engineering.

“I had never really done engineering before. In high school I was never on a robotics team,” Rufer said. “I was sort of unsure about my major at first and I wanted to explore. … I wanted to join a club and racing just seemed like it had the most involving atmosphere.”

After his first year, Rufer said he has settled into the team, gained appreciation for his fellow engineers and became much more confident in his field of study.

“I’m sure some people think engineers are super nerdy and they spend all their time in the dorms doing their work or whatever, but Bruin Racing is a really fun group of people,” Rufer said.

Like Rufer, first-year chemistry student John Chapman didn’t care too much for cars at the start. Chapman was always more interested in motorcycles before joining the club, but decided to get involved anyway. The club has been a constant learning experience, he said.

“Bruin Racing is the perfect blend of applying stuff that you learn in class and learning new stuff that you don’t,” Chapman said. “I’m a chemistry major and now I have a pretty solid background in (Computer Aided Design) at this point and you wouldn’t ever expect that.”

Baja and S&E regularly place within the top 15 out of more than 100 teams. Formula has had less luck because they are a young team – just 4 years old. The team has made it to the competition all four years, but the car has only competed twice and finished once.

Formula’s compact build cycle means they struggle to meet deadlines almost every year, and this year will be no different, Hemminger said. That won’t stop the team from trying, though, and this year their biggest competition is set to run from June 21 to 24.

Chapman said the best part of being in the club is seeing all the hard hours he and his teammates put in come to fruition on race day.

“My favorite part of the year is definitely the competitions,” Chapman said. “Going out and seeing hundreds of teams that have all built these cars, because (at school) you’re super isolated. … It’s just cool to see that you’re not the only one who enjoys doing this stuff.”