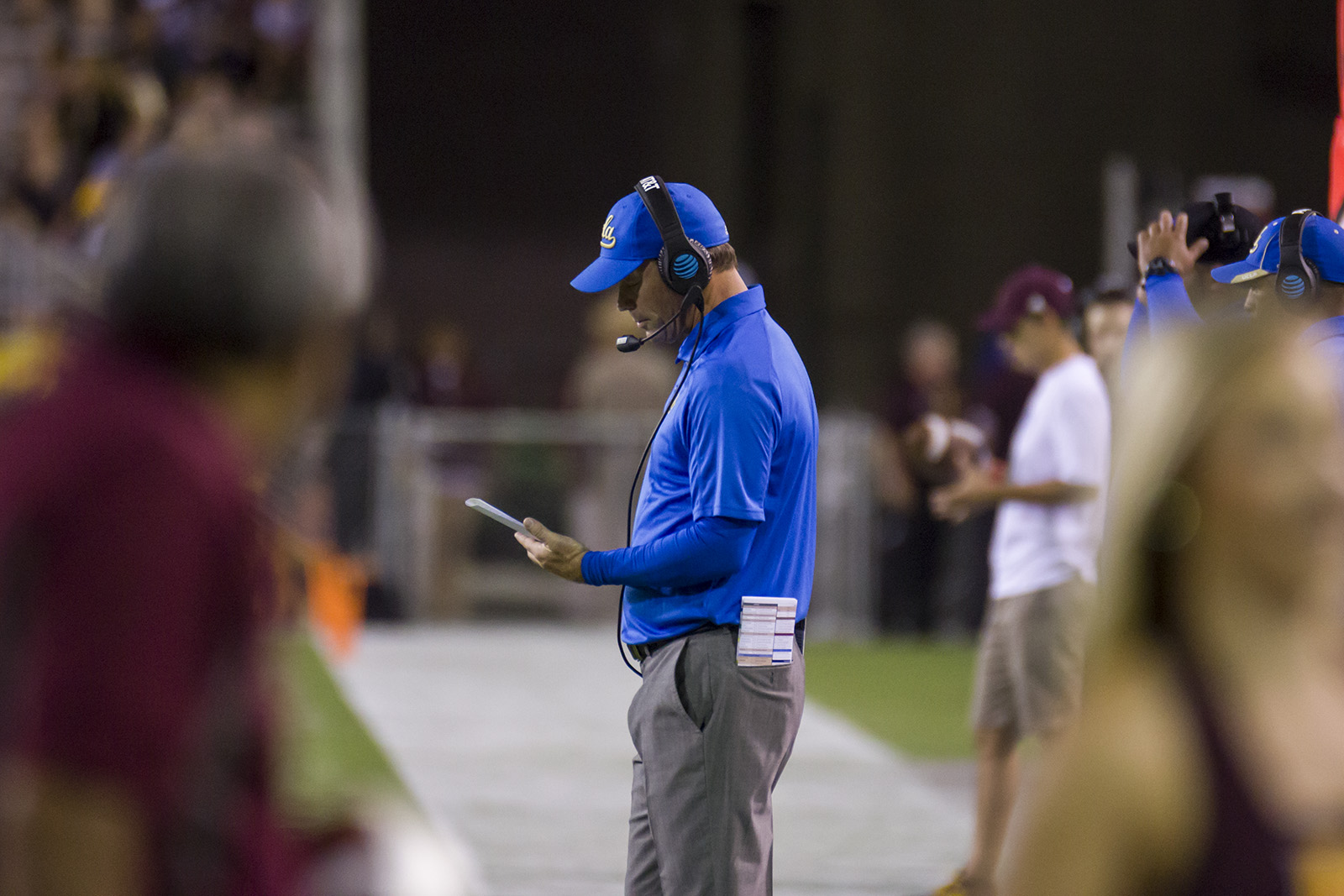 Coach Jim Mora will be entering his sixth season with the Bruins and owns a 41-24 record overall. UCLA football went 2-7 in Pac-12 play and finished the season with an overall record of 4-8 in 2016. (Daily Bruin file photo)

The nets are cut, the buzzer has sounded and the accolades are ready. Bruins from all sports set records, won awards and made headlines throughout the country. To commemorate an eventful 2016-2017 year, the outgoing sports editors – TuAnh Dam, David Gottlieb, Michael Hull, Grant Sugimura and Hanson Wang – present the Daily Bruin Sports Yearlies for the best, the worst and the most interesting highlights UCLA Athletics had to offer.

Out of the 23 teams UCLA fields, only four failed to make any sort of playoffs, championship meets or bowl games. And out of those four teams, UCLA football comes out on the bottom.

After a solid, albeit still slightly disappointing, year two seasons ago – in which the Bruins went 8-5 – there was hope for this past year.

It all culminated in a 4-8 finish and a loss to crosstown rival USC for the second year in a row.

Being less-than-successful in one of the NCAA’s biggest sports would be enough to be considered a disappointment. But the Bruins truly had a disaster of a season, which awards them the title of UCLA’s Biggest Disappointment.

For the third time in four years, the UCLA women’s water polo squad fell to Stanford in the NCAA championship.

However, this year was supposed to be different.

The Bruins came in as the No. 1-seed while the Cardinals were No. 2. On top of that, UCLA defeated Stanford 10-9 in their only meeting during the regular season.

Star freshman Maddie Musselman and redshirt senior Rachel Fattal seemed to be the perfect combination of veteran leadership and youth. All indications pointed to a probable Bruin victory.

UCLA never led during the actual championship game but was able to tie it up with 51 seconds left. However, an intercepted pass led to a Stanford goal to put it ahead with only seconds on the clock. The Bruins could not recover.

Thus another year of heartbreak.


Former UCLA defensive end Takkarist McKinley had been in the NFL for all of a few moments.

“I completed the promise, that means every f****** thing to me,” McKinley said, while holding a portrait of his grandmother. “Excuse my language, fine me later man, fine me later.”

McKinley had made a promise to his grandmother on her death bed that he was going to play Division I football and get out of Oakland and Richmond, California. After the Atlanta Falcons selected him 26th overall, he let all of the emotion come through.

“Fine me later” became an instant classic, becoming viral on the internet, and the best part for McKinley? Commissioner Roger Goodell – notorious for fining his athletes on the most minuscule offenses – let it slide.


No other male athlete had a larger impact his year than Lonzo Ball.

The freshman point guard was a heralded recruit, and he backed it up with 14.6 points per game and a nation-leading 7.6 assists per game. Ball announced his presence at the college level with a posterizing dunk – and subsequent technical foul – in UCLA’s first regular season game, and the rest of the year was a medley of high-flying, rapid-paced ball movement and knockdown shooting.

Ball filled Pauley Pavilion game after game, and he was a catalyst for UCLA’s most exciting team.

The senior notched 659 digs – nearly 400 more than any other player on the team – and was second with 21 aces.

She was named Pac-12 libero of the year two years in a row and a first team All-American by VolleyballMag.com, but was snubbed from AVCA All-American accolades.

Formico’s passing, serving and leadership led the team to a 27-7 record and a trip to the round of eight in the NCAA Tournament – a feat the team had not accomplished since 2011.

Although Formico’s offense never made it on any highlight reel, her lockdown defense makes her clearly the most valuable player of the women’s volleyball team and best female athlete on campus.