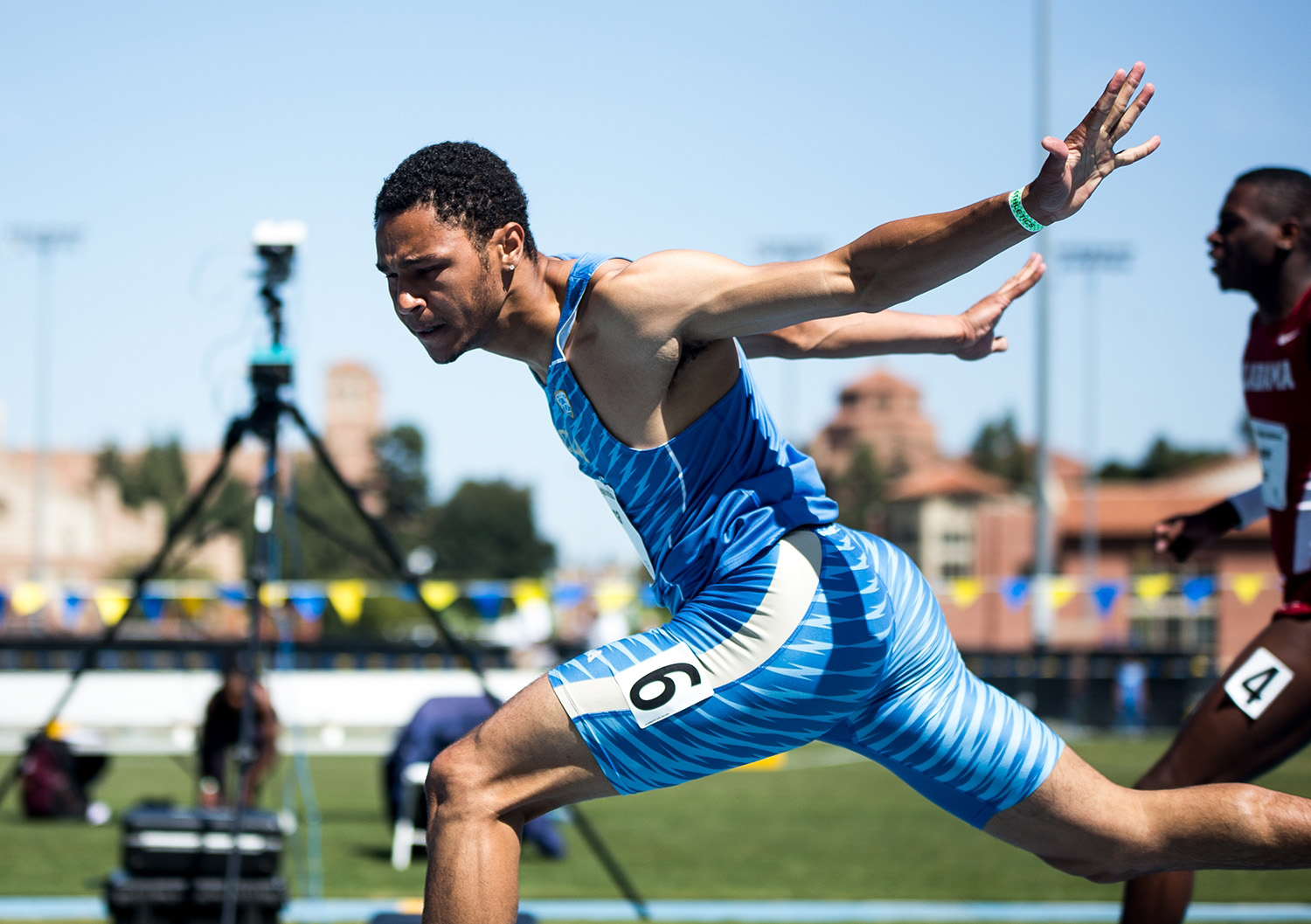 Junior Misana Viltz is the first Bruin on the UCLA men’s team to advance to nationals in the 110-meter hurdles since 2006. His semifinal heat is Wednesday afternoon, one of four opening-day events for UCLA track and field. (Aubrey Yeo/Daily Bruin senior staff)

The most renowned oval in the United States has witnessed dozens of world records, has hosted the past three Olympic Trials and the past four NCAA Outdoor Track and Field Championships, and has helped garner Eugene, Oregon the title of “Track Town, USA.”

This weekend, the best collegiate track and field athletes from around the country will once again descend on the University of Oregon to compete for the last time in the 2017 NCAA outdoor season.

And while it’s not a historic amount, UCLA has more athletes entered in the final meet than it has since 2004.

Sophomore sprinter Rai Benjamin, who’s the second seed in the 400-meter hurdles, and sophomore high jumper Michael Burke, who along with five others cleared the highest regional level bar, lead the way for the 11-person men’s team. But there are first-time national qualifiers also in the mix.

Junior Misana Viltz is entered as the 10th seed in the 110-meter hurdles in his first-ever national championship meet and will run in the semifinal heat Wednesday afternoon.

He’s progressed throughout the season steadily from 14.10 to the 13.68 that got him into nationals, and in the last week and a half, has been tuning his starts to round out what he hopes will be a finals-worthy first round performance.

“This is really my breakout season,” Viltz said. “I think it has a lot to do with the competition. My freshman year and my sophomore year I ran 14 flat both of those years, and I didn’t really get to go on and have a lot of races and stuff under my belt.”

This year however, he’s set to become UCLA’s first 110-meter hurdler in the national championships since Kevin Craddock in 2006. Viltz will be the third act for the Bruins at the meet, following the men’s 4×100 meter relay and redshirt senior Austin O’Neil in the 3,000-meter steeplechase.

On the field, half of UCLA’s athletes are made up of first-time javelin throwers. The men’s event, which features freshmen Simon Litzell and Marian Spannowsky, will get underway Wednesday, while senior Zaybree Haury will throw Thursday for the women.

“It’s great that the first one I go to we’re all going basically,” Haury said. “There’s going to be lots of nerves – lots of nerves.”

The senior set the UCLA record earlier in the year during the team’s first dual meet against Long Beach with a throw of 51.28 meters and improved upon it against USC. She’s one of just three women competing at nationals for the Bruins, alongside sophomore thrower Ashlie Blake and sophomore Julia Rizk, who’s entered in the 800-meter run.

Blake has the highest seed of any of them – she’s the fifth seed in the shot put – and unlike last year when UCLA had three entrants at nationals, is the sole representative in the event.

Redshirt sophomore thrower Dotun Ogundeji has been dealing with a foot sprain ever since the Pac-12 championships, and was unable to move on to nationals in the shot put. He still made nationals, however, in the discus, for the second year in a row.

The NCAAs will be a different experience for him this time around with only the discus, he said, but it will be a fun meet since he’ll only have to mentally focus on the one event rather than two.

“Every time I literally just have to focus in on the one event, I do very well in it,” Ogundeji said. “(Against) Long Beach earlier in the year, I just threw discus and had a PR then, regional meet I literally just threw discus that day, so I had a season-best then. … (There won’t be) the mental aspect of coming in where I have to think about, ‘How much energy can I save for this or that?'”

And that’s not unique to just himself.

Regardless of how things work out this weekend, for each of UCLA’s 14 athletes, every run, throw or jump will be one of the last he or she will do for the collegiate season.

Of the UCLA athletes that could have advanced to a finals heat Wednesday, only one made it. Benjamin won the last and final heat of the 400-meter hurdles to advance as the fourth seed to the finals, which will be Friday. His 48.99 performance was nearly three whole seconds faster than his preliminary heat at the Western Regional.
Viltz finished last in the 110-meter hurdles while the men’s 4×100-meter relay team finished third to last. In the only field event of the day for UCLA – the men’s javelin – Litzell and Spannowsky finished 16th and 23rd, respectively.